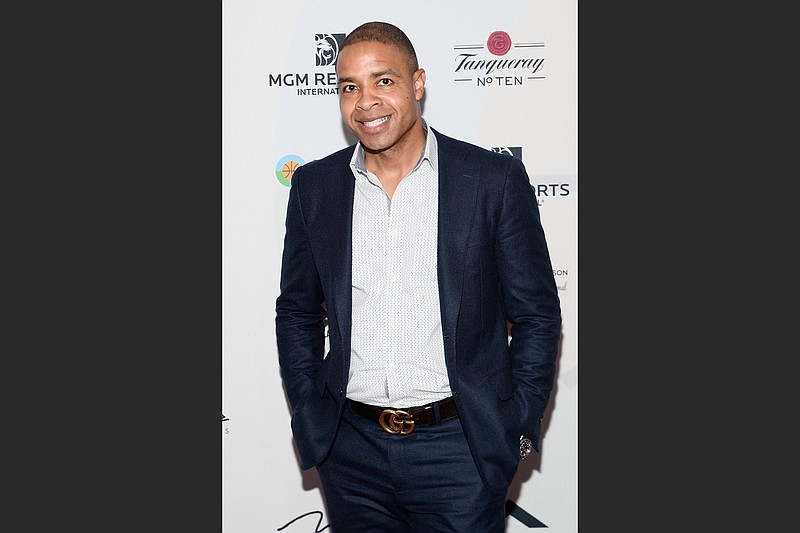 Fox Sports 1 Anchor Mike Hill attends the fifth anniversary gala for the Coach Woodson Invitational presented by MGM Resorts International at 1 OAK Nightclub at The Mirage Hotel & Casino in 2018 in Las Vegas. Hill is now a co-host of the “Start Your Day” program on the Black News Channel, which made its on-air debut in February 2020, targeting viewers who sought an alternative to existing news options. (TNS/Bryan Steffy)

"As a Black man, I could never understand that," Hill said, his voice laced with irritation. "Never. Not for entertainers, not for athletes, not for me as a former sportscaster. People say, 'Stick to sports.' I'm still a Black man. I'm still a father. I'm still a husband. I still care about this community. Until I see equality in this country, I'm never going to shut up."

That declaration on his third day on-air is a clarion call for viewers seeking an alternative to the myriad of existing news options. It's the type of statement he would have felt uncomfortable saying on Fox Sports, where he has worked the past eight years.

"I got tired of the sports narrative," Hill said later that day during an interview. "Even though I was doing sports and sportscasting, I was finding myself leaning toward political views."

Khan hired experienced TV executive Princell Hair in July as chief executive officer. Hair's resume includes stops at NBC Sports, Comcast Sports, Turner Broadcasting and KCBS-TV in Los Angeles. He was senior vice president for program and talent development at CNN in 2004 and 2005 and lived in Roswell, N.M., for a time.

"Our mission is to provide multiplatform programming that is entertaining, information[al] and inspiring for Black and brown communities," Hair said. "I've worked in newsrooms my entire career. This group has been underserved. We want to provide a voice for the voiceless."

But first, Hair had to ensure viewers could actually access BNC, which has its headquarters in Tallahassee, Fla. He negotiated deals to expand accessibility over the past eight months from 2.5 million households to 52 million.

The trick now is to get viewers to watch. For Hair, that means beefing up the news operation. He has nearly tripled the staff from 55 to 155, adding new correspondents nationwide and hiring commentators Charles Blow and Marc Lamont Hill to do their own shows. (Blow, a New York Times opinion columnist, splits time between Atlanta and New York.)

He also revamped the morning show, adding Hill and Sharon Reed, a fervent broadcaster who last worked at Atlanta station CBS46 two years ago. Because of the pandemic, the two hosts are working remotely, but Hair plans to build out a studio for them in Atlanta at a later date. Joining them are Atlanta-based reporter Lauren McCoy and meteorologist Kevan Smith.

For now, Reed is working from her home in Atlanta. Hill is splitting time between Los Angeles and Atlanta, where his new wife and "Real Housewives of Atlanta" cast member Cynthia Bailey resides.

"The time couldn't be more perfect for this," Reed said. "You can tell where my heart is on this. It's just an opportunity to be authentic and real and passionate and just tell the truth. In this case, the truth about Black people and our diversity and our excellence."

SOLD ON A VISION

She said after she spoke with Hair about his vision for BNC, she was sold: "I left that meeting and drove around for two hours listening to music, just thinking, 'These kinds of opportunities don't come around every day.' I desperately wanted this."

Hill said when he heard Reed might be his co-anchor, he became excited, having had her as a guest on Fox Sports: "I've always admired and respected Sharon's tenacity and fearlessness."

He hopes their morning show can fish out stories and topics that aren't already existing trending topics on what he terms "Black Twitter." Instead, Hill said, "we want to be the influences for Black Twitter."

Hair said he liked this combination because Reed and Hill are "dynamic personalities and intellectually curious." And he believes both are capable of doing compelling long-form interviews with newsmakers.

First of all, he said, the Black audience is younger and more difficult to reach.

"And I think people over the years have been trained not to expect a lot from the CNNs or ABCs or Frontlines of the world to represent Black culture," Deggans said. "That creates a dynamic where it's harder to get audiences of color to care about traditional news programming."

On top of that, building a full-fledged news operation takes a lot of upfront financial investment and could quickly become a financial black hole. Deggans noted the failed Al-Jazeera America effort in the United States from 2013 to 2016 and WGN's recent struggles to create viable prime-time news programming.

NewsMax and One America have made ratings inroads in recent months, siphoning some of the Fox News audience, but Deggans said that is an older audience that is already inured to watching cable news.

"I hope BNC can manage to keep it going," Deggans said, "but they are going in knowing they are going to lose money for a while. Hopefully, they have a plan for that."

Hair said the company could consider moving to a larger city, and Atlanta is a possibility given its airport and accessibility to notable in-studio guests.

And from a marketing perspective, Hair plans to interchange the use of Black News Channel and the acronym BNC. "We live in a world of acronyms," he said. "BNC is just easier."

The Black News Channel is available for subscribers on certain tiers of Xfinity, DirecTV, Spectrum, AT&T and Dish as well as several online streaming platforms such as Pluto TV, Amazon Fire TV, Tubi and Roku. BNC is available in more than 52 million households.