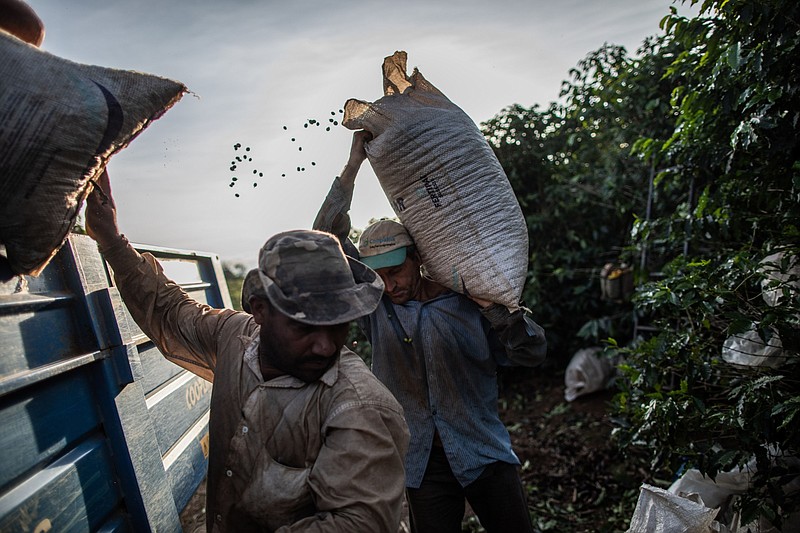 Workers harvest coffee on a farm in Machado, Minas Gerais state, Brazil, on May 28, 2019. MUST CREDIT: Bloomberg photo by Victor Moriyama

Coffee supplies in the U.S. are shrinking, and wholesale prices are surging, with the hard-hit market bracing for further fallout from a global shortage of shipping containers that's upended the food trade.

Cafes and importers are facing tight supplies and higher costs because of a dearth of space on shipping containers that transport coffee beans from Brazil, the top exporter, and Central America. For now, roasters are able to draw on inventories rather than raise prices, but with stockpiles sliding and a smaller Brazilian crop coming, the strains are expected to persist.

"Everybody is feeling the pinch," said Christian Wolthers, the president of Wolthers Douque, an importer in Fort Lauderdale, Fla., who estimates that shipping costs have more than doubled from Latin America. "These bottlenecks are turning into a container nightmare."

While cargo-market disruptions have played havoc with the global food trade generally, the problems in the coffee market show that food inflation already on the rise could be exacerbated as economies reopen.

Coffee stockpiles have sunk to a six-year low in the U.S. even with Brazil's record crop, and a large drop in output after a drought in the South American country is expected to shift the world balance to a deficit in coming months just as demand rebounds.

Arabica-coffee futures in New York rose about 24% since the end of October after the damage to Brazilian groves. In February, American green, unroasted bean inventory slid 8.3% from a year earlier to the smallest since 2015, industry data showed last week.

Goldman Sachs Group Inc. said in a report that if production in Central America doesn't improve in coming years, the market will enter a structural deficit given the rebound in demand.

In the facilities of Dinamo, one of Brazil's largest coffee warehouses operators, there's a lot of coffee stuck waiting for containers. In the company's unit in Machado municipality, in the coffee heartland of Minas Gerais, beans are awaiting the arrival of 18 empty containers, said Luiz Alberto Azevedo Levy Jr., a director at Dinamo. "These containers will probably take about 15 more days to get here amid bottlenecks at the port," he said.

The situation, which got even more dire in March, will probably reduce the volume of coffee exported by Brazil, Levy Jr. said.

"Logistics have been a headache, dealing with lack of space and containers," said Marco Figueiredo, trader and partner at the Florida-based Ally Coffee, a specialty coffee merchant that imports beans from countries including Colombia, Guatemala and Brazil. "We are monitoring the situation and talking to clients, making them aware of the rising costs."

Denmark's A.P. Moller-Maersk A/S, the world's largest shipping company, said containers and charter vessels are temporarily unavailable for purchase or lease, increasing congestion and bringing delays at ports. The company has tried to purchase or rent all available containers, and is keeping aging units in operation. It's also repairing ones that it usually wouldn't at higher costs, Maersk said in an emailed response to questions from Bloomberg.

"This is a temporary situation, both in terms of purchasing patterns and availability of vessels," the company said. "We expect things to return to normal during the first half of 2021."

For now, many merchants are trying to hold the line on price increases as they work to lure customers back to cafes and restaurants. There's steady growth in coffee, though the out-of-home segment could take two to three years to return to pre-covid-19 levels, according to David Rennie, head of Nestle SA's coffee brands.

Stefano Martin, sales and marketing export manager at Italy-based cafe chain Diemme, said the business isn't yet feeling the full impact because it's still operating under contracts made before the shipping disruptions. That could change as those contracts are renewed, he said.

The company has 26 restaurants and coffee shops, and typically imports 30,000 bags in around 90 shipping containers from Brazil, Colombia, El Salvador, Honduras, Tanzania and India.

"There is no impact on our side yet as we have closed all contracts before the prices increased," he said. "But most probably the next batch of contracts will be charged to us."

Sacks of coffee beans are ready for export in the storage area of a Dinamo Inter-Agricola Ltda. facility in Machado, Minas Gerais state, Brazil, on Feb. 28, 2018. MUST CREDIT: Bloomberg photo by Rodrigo Capote
ADVERTISEMENT