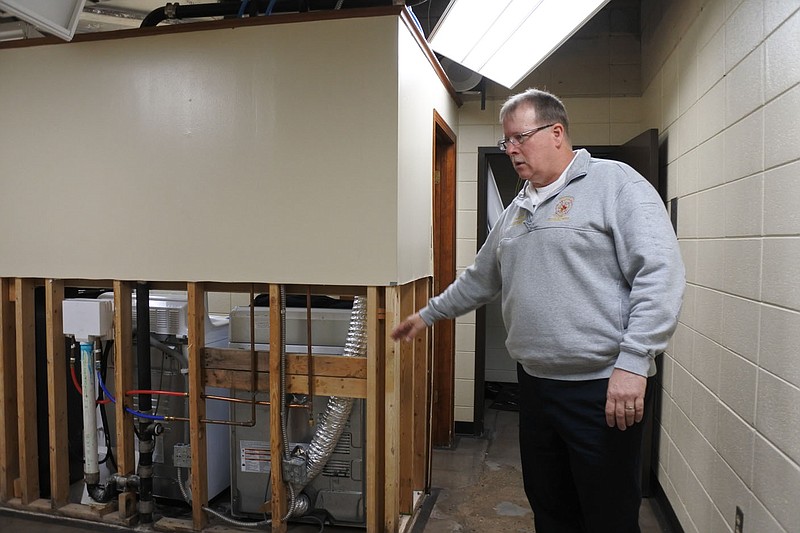 Fire Chief Phil Christensen talks about the battalion chief's office at the Fort Smith Fire Department's Station 1 on Thursday. This office was one of multiple rooms at the station that were discovered to have been affected by fungi last year. (NWA Democrat-Gazette/Thomas Saccente)

FORT SMITH -- Firefighters at Station 1 sleep in the training room and cook in the engine bay.

They've lived this way since last September after a survey found Aspergillus and Cladosporium fungi at the station at 200 N. Fifth St.

They're expected to move back into their sleeping and living quarters in mid-July after the city spends almost half a million dollars to remove the mold and renovate the building.

The Fire Department had to move some of its vehicles, including a bomb squad response truck and rescue boat, to outside stations to make room for a kitchen, dining area and weight room in the bay. Fire trucks are still housed there, however.

"So you can imagine days like yesterday, today, as windy as it is, trying to cook and clean in a sanitary condition," said Fire Chief Phil Christensen on March 18. "It makes it impossible."

The firefighters now sleep in the station's classroom, Christensen said. The arrangement has impacted all the fire stations on the north side of the city because classroom training sessions can't be held there.

"Their training is having to be shifted all the way out south to our classroom out at Fire Station 11" on Massard Road, Christensen said. "So we have to take into account who gets to leave their district, who has to cover their districts. We can't leave any districts uncovered, even for training."

Christensen said Fire Station 1 continues to provide the same level of service to residents. Eighteen firefighters work out of the station, with six living there at a time for a 24-hour period.

Aspergillus and Cladosporium, as well as Penicillium, are the most common indoor molds, according to the federal Centers for Disease Control and Prevention website.

Exposure to damp and moldy environments can cause a stuffy nose, wheezing, and red or itchy eyes or skin. Others, like those who are allergic to molds or who have asthma, may suffer more intense reactions.

The city Board of Directors last month unanimously authorized a contract with Fort Smith-based Turn Key Construction Management, Inc. to renovate the station's living and sleeping quarters. The $487,900 bid came with a timeframe of 120 days.

The money was included in the Fire Department's 2021 budget from the city general fund, according to Deputy City Administrator Jeff Dingman.

"The health and safety of all city employees is a priority, especially when it comes to the facilities we provide for them in which to work," Dingman said. "All of the city's 11 fire stations provide housing and living quarters for the 24/7 fire coverage provided by the FSFD, and the city has a responsibility to provide clean and livable facilities for these employees."

The Fire Department's budget for 2021 is about $14.8 million, Christensen said.

Christensen said construction is due to be completed July 16, with the project to be finished in phases. The kitchen space and offices will be finished first, which will get the firefighters out of the engine bay. The dorm room and weight room will be finished afterward.

Fire Department Capt. Jesse Chandler, who has worked at Station 1 for nine years, said the changes stemming from the mold problem haven't been too bad.

"We're sleeping in the classroom, that's climate-controlled," Chandler said. "I mean, other than moving 40 foot, we're just out in the engine bay, but it hasn't been really too inconvenient at all because the weather's been nice."

Chandler said the heaters in the engine bay worked well during colder weather earlier this year.

Christensen said the mold issue was discovered late summer of last year when the station's dorm area began smelling humid. He noted the station, built in 1973, previously experienced problems with its air conditioner, the vents for which run through the floor.

"We've had issues in the past with the heat and air units to where we had to install a sump pump inside the floor drains to keep the water pumped out," he said. "We thought maybe the pump had gone bad, went back here, investigated."

They found about 2 feet of standing water inside the floor vents although the pump was still working.

"Come to find out we had a crack inside the floor vents due to the age of the building," Christensen said.

They also discovered what appeared to be mold. The department moved the crews out of the building and hired a firm to conduct an air quality survey.

An elevated mold count was found in the dorm room, captain's quarters, kitchen, living area and offices on one side of the station. Mold affected other rooms and ceiling tiles as well.

The department decided to rip out sheetrock that had shown moisture, Christensen said.

"The kitchen cabinets, all ceiling tiles, insulation, all the walls in the dorm room, everything had mold growing on the inside of everything," he said.

Sharone Norwood, president of the Fort Smith chapter of the International Association of Fire Fighters, said via Facebook Messenger on Wednesday that the organization has no comment regarding this situation.

Station 1 isn't the first facility of its kind in Northwest Arkansas to be afflicted by mold. Both Aspergillus and Stachybotrys mold were discovered in the heating, ventilation and air-conditioning system of Fayetteville's Fire Station No. 3 on South Happy Hollow Road in 2010. Construction of the building had been completed in 2008.

A payment of $66,843 to remove the mold and remodel the building was finalized in 2011, with Don Spann, a Rogers architect, the Fayetteville Fire Department, Batson Bravo Engineers of Little Rock and Heckathorn Construction Co. of Fayetteville paying $16,711 apiece. The station's fire company prior to this moved to another fire station for four months before returning and working out of a trailer for two months.

Another city fire station, located at 2424 W. Olive St. in Rogers, was found to have mold in 2015. This mold stretched about 30 to 40 linear feet along the entirety of the station's northern interior wall, which had two bedrooms, a gym area and a heating and cooling room sitting against it.

The mold there came from three sources: a heating and air conditioning leak, gutter issues and drainage problems. The Rogers City Council approved funds for mold remediation in April 2015, with documents showing $25,000 was used from the city's general reserve. 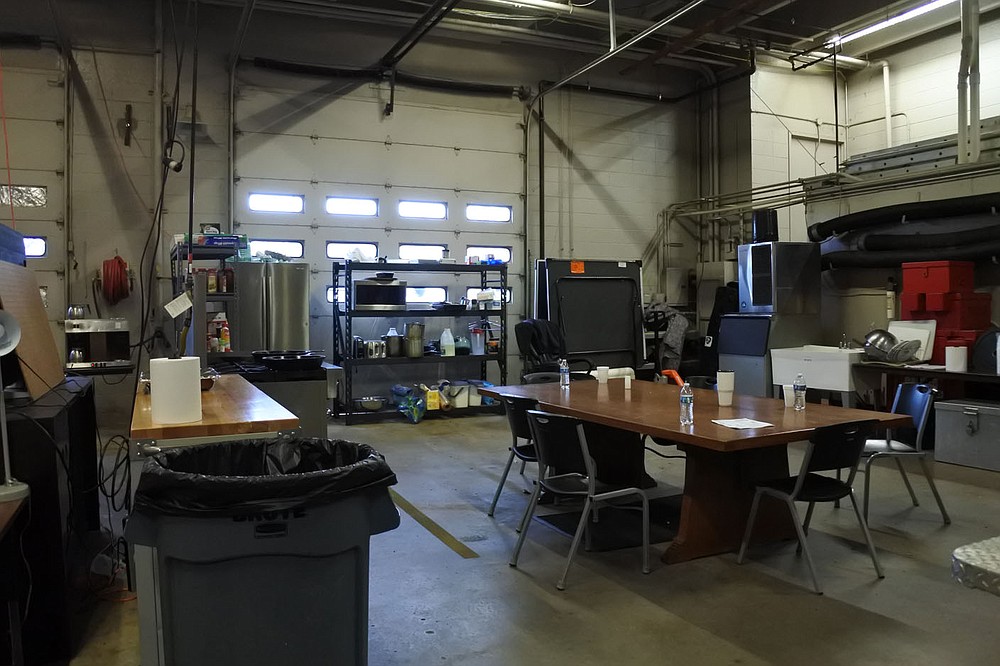 Part of the engine bay at the Fort Smith Fire Department's Station 1 as it was on Thursday. Fort Smith Fire Chief Phil Christensen said the mold problem at the fire station has caused the station personnel to live in the engine bay. The fire department had to move some of its vehicles there, including a bomb squad response truck and rescue boat, to outside stations to make room for their kitchen, dining area and weight room. (NWA Democrat-Gazette/Thomas Saccente)
More News

The Fort Smith Fire Department has a total of 11 fire stations and 149 uniformed personnel.