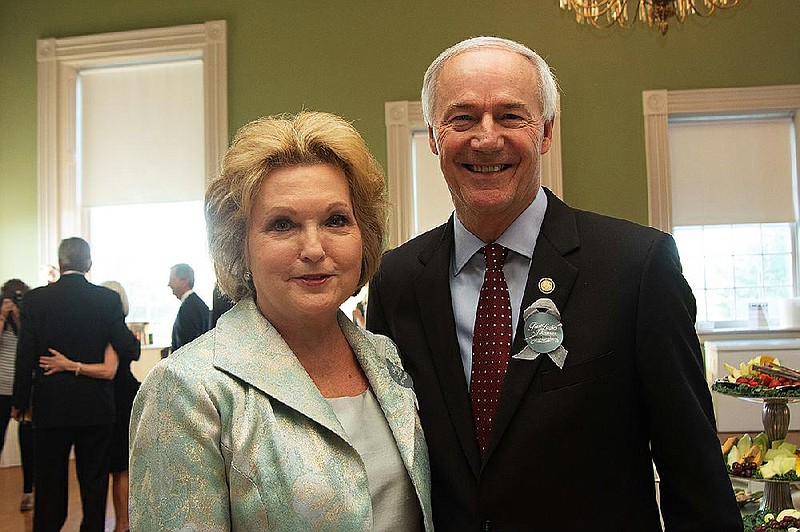 Before a House vote last week on legislation to strip a public commission of its oversight of local teams that respond to child-abuse cases, Gov. Asa Hutchinson sent a letter to commission members -- including several executive branch employees -- asking them to support the bill.

The letter, as well as the governor's public support for House Bill 1499, prompted questions about conflicts of interest given the close ties between the nonprofit that would take over the commission's duties and first lady Susan Hutchinson, who sits on the nonprofit's board of directors.

Under current law, the Arkansas Commission on Child Abuse, Rape and Domestic Violence and its staff are responsible for the coordination of child advocates, law enforcement officials, health care professionals and prosecutors -- collectively known as multidisciplinary teams -- who respond to reports of child abuse and provide services to victims.

Under HB1499, oversight of the multidisciplinary teams would be handed over to the nonprofit Children's Advocacy Centers of Arkansas, which is one of the groups that are part of the multidisciplinary teams. The nonprofit's website states that among its services are providing victim support and advocacy; conducting forensic interviews; and providing medical exams and therapy.

The governor denied any conflicts Friday, saying in a statement, "First Ladies always have initiatives or causes they support. Of course the Governor is supportive of the cause as well."

The Arkansas Democrat-Gazette obtained a copy of the governor's letter under a public-records request after it was sent to commission members.

In the letter, Hutchinson stated that he is in "full support" of HB1499, adding that the first lady "has worked hard" on the legislation. The governor says in the letter that he spoke to Chancellor Cam Patterson at the University of Arkansas for Medical Sciences, which houses the commission, and was "assured" that UAMS would not oppose the bill.

"I am asking that you join me in supporting this endeavor as we work together to improve our response to our most valuable population," the governor's letter states.

The bill is sponsored by Rep. Charlene Fite, R-Van Buren, and Sen. Jonathan Dismang, R-Beebe, both of whom sit on the advisory council of Children's Advocacy Centers of Arkansas. As the bill passed the House on Tuesday by a vote of 74-11, Susan Hutchinson watched from the visitor's gallery above the chamber.

Neither the bill sponsors nor Susan Hutchinson reported receiving any income from their positions regarding the Children's Advocacy Centers of Arkansas.

All three said they did not perceive a conflict of interest in their support of HB1499.

"I'm a 24-hour, seven-day-a-week volunteer for the state," Susan Hutchinson told a reporter last week, noting her involvement with other community organizations and charities. She praised the work of the Children's Advocacy Centers of Arkansas, and said the group will be more efficient in distributing money for local services than going through UAMS.

"It's cutting out the middleman, will be much more cost effective and it will be in the hands of [Children's Advocacy Centers] people who are on the field with the work, and working alongside helping the kids," Susan Hutchinson said.

Fite said her role on the advisory council did not give her any authority in decisions over the nonprofit's operations or budget.

Dismang, who said he's been less active on the advisory council recently, said he recognized the "validity of concerns" raised by the bill's opponents and would work with lawmakers to see if a compromise can be reached.

"There's a little bit more controversy than I had realized," Dismang said.

The commission has 22 members, all of whom are appointed by the governor to five-year terms. Four members who were sent the governor's letter also work for agencies that report to him: the Arkansas State Police, the Division of Children and Family Services, the Department of Health and the state Crime Laboratory.

Several lawmakers and opponents of HB1499 told the Democrat-Gazette that they were uneasy about potential conflicts between those pushing the bill and the Children's Advocacy Centers.

Rep. Denise Garner, D-Fayetteville, said the governor pressured UAMS and commission members not to speak against the bill, and that testimony for the bill at a committee hearing Monday was weighted by people who work for the Children's Advocacy Centers and agencies that report to the governor.

"He's going to do everything he can to make sure [Susan Hutchinson] gets what she wishes," Garner said of the governor. "I just don't think that's the best thing for the kids."

In his statement to the Democrat-Gazette, Hutchinson said he did not pressure any state employees to stay neutral on the bill, and that his only conversations were with Patterson.

"Almost every state honestly uses this model," Pulley said, adding that Arkansas, Oregon and Oklahoma are the exceptions.

Pulley, who is also a member of the commission, criticized that body for poor transparency and not communicating well with members of the multidisciplinary teams, including Children's Advocacy Centers around the state.

"It's not a normal functioning state commission ... we don't make any decisions and we don't oversee any of the money," Pulley said, adding that those functions were performed by commission staff members at UAMS.

Paula Stone, the commission's executive director, did not respond to requests for comment last week. Her administrative assistant referred all questions to a spokeswoman for UAMS.

UAMS spokeswoman Leslie Taylor said Patterson was out of the office and unavailable for comment.

"However, I'm not aware of any concerns at UAMS with the commission or the current system," Taylor said in an email. "We feel like they [have] been well-run and have served the people of Arkansas well."

In his statement Friday, the governor said, "UAMS has done an excellent job in supporting [Children's Advocacy Centers]. As they have expanded in service to children, a change in model makes sense."

The bill faced push-back last week from prosecutors and multidisciplinary team coordinators, who said the national model may not be suited to Arkansas, especially in more rural areas where the nearest Children's Advocacy Center may be a far drive.

Nathan Smith, the president of the Arkansas Prosecuting Attorneys Association, was one of four members of the commission to testify on HB1499 at the hearing Monday. He was the only one to speak against the bill.

Asked about the governor's letter last week, Smith said he did not feel pressured to remain neutral on the bill.

"The letter to me was not noteworthy," he said.

The Children's Advocacy Centers operate 17 centers in the state, as well as 10 satellite facilities, according to Pulley.

Under the current setup, 38 coordinators oversee teams in 67 of the state's 75 counties. Those coordinators work for different agencies or local Children's Advocacy Centers and their work is overseen by the commission.

"I'm afraid that this bill is going to swallow up my rural counties, my [multidisciplinary teams]," said Jeff Phillips, the prosecuting attorney for the 5th Judicial Circuit in Pope, Johnson and Franklin counties. Of the state's 28 elected prosecutors, 25 oppose the bill and three are neutral, according to the Prosecuting Attorneys Association.

Rep. Jimmy Gazaway, R-Paragould, a former deputy prosecutor who praised the work of Children's Advocacy Centers as "important and vital," voted against HB1499, saying he was concerned that the nonprofit would consolidate local teams and move coordinators to the nonprofit's centers.

"I see this as a consolidation of money and power," Gazaway said.

Pulley denied that the nonprofit had any plans to consolidate teams or fire coordinators. She said the group hoped to expand, and with "very little" funding from the state planned to hire a statewide coordinator to manage administrative oversight of the multidisciplinary teams.

According to Taylor, the spokeswoman at UAMS, the commission operates on a $6.8 million budget and receives $1.4 million in state general revenue. Out of its state funding, the commission currently allots $696,081 for Children's Advocacy Centers.

Neither Pulley nor UAMS could say how much additional funding the nonprofit would receive under HB1499 in order to take over administrative duties from the commission. A spokesman for the Department of Finance and Administration said the agency has not determined the cost of the new system.

Max Snowden, a former executive director of the commission for 20 years, said Friday that while he had praise for both the bill sponsors and the Children's Advocacy Centers, he did not believe that the nonprofit should be put in a position for more authority -- and funding -- by lawmakers with close ties to the organization.

"Yes, I see that as a conflict," Snowden said regarding the ties between Susan Hutchinson, the bill's sponsors and the nonprofit. "Elizabeth [Pulley, the nonprofit's executive director] has sort of a built-in advantage by those folks being there and they wouldn't be there if they weren't interested in those issues. So they're going to support efforts that are positive for the [Children's] Advocacy Centers."

As for the commission and its eight employees, Taylor said the "staff have many roles addressing issues related to child abuse, rape and domestic violence across the state."

Those roles will be examined in the event HB1499 passes, Taylor said.