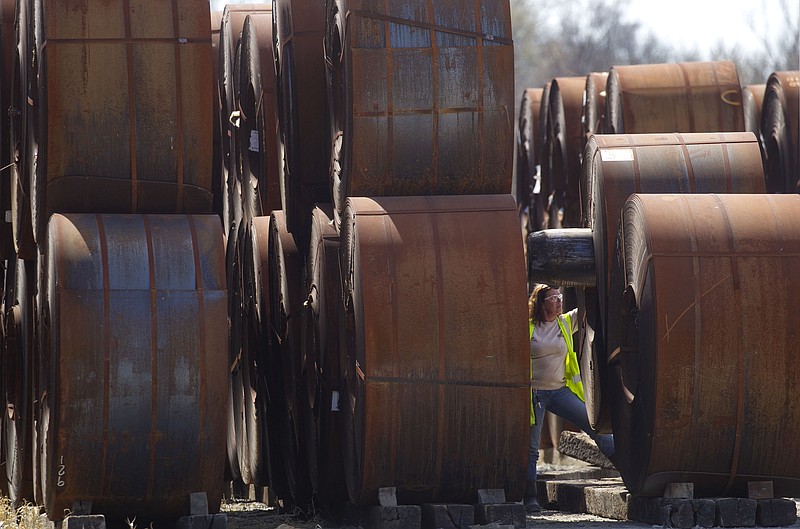 Arkansas Democrat-Gazette/BENJAMIN KRAIN --2/29/2016-- Welspun workers at a loading yard near the Port Authority of Little Rock stack large metal coils unloaded from barges and trains to be moved to the nearby Welspun pipe manufacturing facility nearby.

A byproduct of the cancellation of the Keystone XL pipeline has been the disruption of barge economics on the Arkansas River, which threatens to make the Port of Little Rock less competitive.

For years, shippers in Little Rock have counted on a steady supply of inbound barges loaded with steel for Welspun Tubular's pipe manufacturing facility at the port.

Almost as soon as the barges were unloaded, they were outbound with other products.

Welspun generated more revenue for the port than any other tenant in recent years. It won an order last year to produce more than 1 million feet, or 190 miles, of 36-inch pipe for the Keystone XL project. It was an order that allowed Welspun to avoid a major reduction in its 600-person workforce, according to company officials.

Keystone XL pipeline is a nearly 1,200-mile project intended to carry crude oil from Canada to Nebraska to connect with a pipe network to deliver the oil to refineries on the Gulf of Mexico. President Barack Obama halted the project in 2015 and President Donald Trump revived it four years later.

President Joe Biden pledged to kill the $8 billion project during his campaign for the White House, siding with opposing environmentalists, climate activists and indigenous groups.

When Biden canceled the pipeline project, it triggered at least a pause in the domestic oil and gas industry and inbound barges no longer arrive at the port with nearly the same frequency.

"This month I've had more outbound loads than inbound ones," said Fred Long, the general manager for LSI Services Inc., the contract stevedore for the port.

The Keystone cancellation has coincided with a downturn in port activity not only across the docks but in rail movement within the port, where the port earns money on every car that moves in or out. Last month's activity also was interrupted by record snowfall, which shut down operations for one week in an already short month.

For the first two months of 2021, the port has worked 42 barges, 19 of them in February. Bryan Day says Welspun was a factor.

"This is 29 barges below last year's activity level with the difference attributable to the downturn in the steel coil handling," he said in a report to the port's board of directors earlier this month.

That triggered a drop in revenue causing the port to operate at a slight deficit. Day has said some budget adjustments will be made at the end of the first quarter.

But the larger river economy also has been affected by the Keystone XL cancellation. With fewer inbound barges, there no longer is a ready supply of outbound barges, which can be costly to procure when they aren't already in the port and are needed by a shipper quickly.

Pam Cascio, president of C-River Logistics in Metairie, La., brokers barges for shippers up and down the Mississippi River as well as the Arkansas River.

"We did a lot of barging up the Arkansas River for Welspun," she said in an interview last week. "It's just not there right now. What makes it hurt even more is all of these people that need to get barges loaded back off the Arkansas River. That is where our problem is starting to develop."

"We've had a couple of loadings that were very urgent out of Little Rock and the barge carriers agreed to drag empties from Catoosa [Oklahoma] down for us to load," Cascio said. "Generally, the barge companies, where they unload is where they like to get the reloads from. To have to take empty equipment to move it to another spot to load, they lose money on that."

If barge operators are working under a contract with a set price to provide barges, they risk losing money and so they might wait until a load is available to go to Little Rock. If a shipper cannot afford to wait, the cost can go up.

The barge industry needs Welspun's fortunes to rebound, she said.

"We've been pushing back load dates for the past ... maybe a month," Cascio said. "It's been tight. Maybe even longer than that. It's out of whack right now. Welspun needs to get going so we can get some more barges up there.

The pause might be temporary, according to Day. He told the board that he expected a rebound this month with LSI Services projected to work 30 barges. He also said Welspun is starting production on its first project in almost a year.

"This project will be six hundred fifty (650) car loads of forty-eight (48) inch pipe," Day said in a memo to the board. "It will be manifest movements of fifty (50) to sixty (60) cars per week to the Alberta, Canada region. Shipments will begin late March or early April."

Cascio said she hopes the worst is behind.