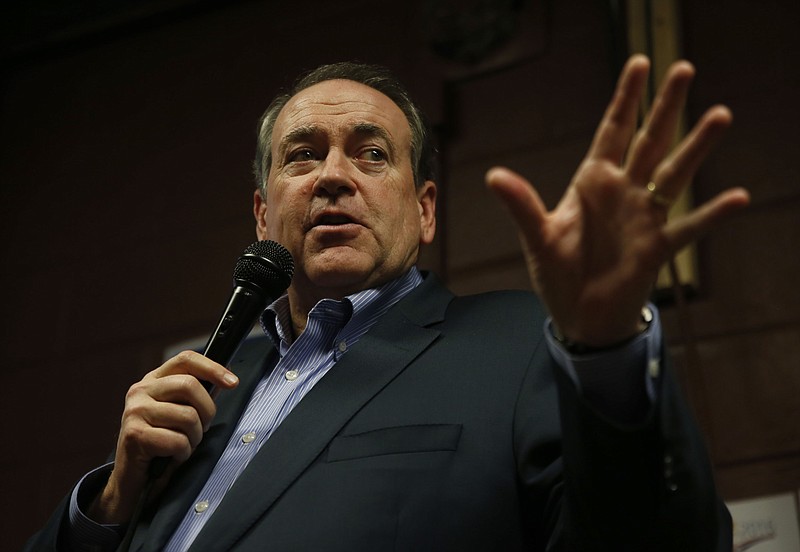 Including state and local contests, Huck PAC made total contributions of nearly $2.7 million to 456 candidates, its website states.

The organization raised nearly $12.9 million and spent nearly $11.2 million during the election cycle.

"We [gave] to every pro-life House and Senate candidate we could find who was willing to receive funds," Huckabee told the Arkansas Democrat-Gazette in an email.

U.S. Sen. Tommy Tuberville of Alabama, the only Republican to unseat a Democratic senator last year, was another beneficiary.

In many of those highly contested races, Huckabee's PAC gave the maximum $10,000 contribution, offering help in the primary as well as the general election.

"HuckPAC intentionally gives to challengers in tough races that the big committees won't give to," Huckabee said in an email.

When Huckabee ran for president in 2008, he was barely an asterisk in the early polling. He went on to win the Iowa caucus and carry seven other states.

"I remember how valuable it was to have help when I was a nobody and people gave me no chance to win," he said.

"We help incumbents as well, but we're most excited about being the first to give in some of the congressional races that weren't on the radar of many people, but they ended up beating an incumbent Dem," he said in the email.

While Huck PAC's giving was national in scope, it disproportionately benefited Arkansas candidates and causes.

Huckabee's organization "was very influential [for] many individual candidates in helping them get to the finish line and making sure they were financially equipped," said Republican Party of Arkansas spokesman Seth Mays. "He's a team player, and we're certainly thankful for that."

Huck PAC gave $45,000 to members of the Arkansas congressional delegation. All five recipients were reelected.

The figure also includes $5,000 for the Republican Party of Arkansas and $25,000 for Arkansans for Transparency, a group that successfully blocked ballot measures concerning redistricting and ranked-choice balloting.

Webb's husband, then-Republican Party of Arkansas Chairman Doyle Webb, received more than $12,500 for his work with Arkansans for Transparency, according to a statement of financial interest that she filed earlier this year.

Then, as now, politicians use leadership PACs to further their agendas, Mayersohn said.

Huckabee's managed to raise $12.9 million despite that disadvantage.

"Kevin McCarthy's leadership PAC gets tons of contributions from corporate PACs, people who want to curry favor with the Republican leadership so they donate," Mayersohn said.

McCarthy's list includes more than 170 major corporate PACs, ranging from Boeing, Microsoft and Walmart to Raytheon, General Motors and Delta Airlines, according to the center.

The governor's PAC gets more of its money from tens of thousands of small donors -- people giving $200 or less per cycle, Mayersohn said.

Of Huck PAC's nearly $12.9 million in donations during the 2020 cycle, nearly $9.6 million was not itemized, meaning it came from small donors who gave less than $200.

The donor base skews older.

Of the contributors listed on its year-end Federal Election Commission report, 92% were described as retired.

Most of the money that Huck PAC raises -- 63.8% -- is spent on fundraising, the center's analysis shows.

Its biggest vendor, Manassas, Va.-based Planet Direct Mail, received nearly $2.3 million for its work during the 2020 cycle, the center said.

Another direct-mail company, Forest, Va.-based RST Marketing, came next with $1.2 million, followed by HSP Direct, with $1.1 million. HSP is based in Ashburn, Va., and describes itself as an "award-winning, direct mail, fundraising agency."

In an email, Huckabee challenged claims that three-fifths of the PACs revenue is spent on fundraising.

"That might be true if we used mail and emails in a more traditional way, but we use those to actually make voter contacts and advocate for prolife candidates," he said.

"Traditional mail fundraising is effective, but there is a large cost for the return. We started using our mail program to communicate about candidates and issues, and found that it was more effective in raising funds for direct support for candidates. We also kept our donors apprised of where the money went and how our candidates did," he said.

While Huckabee moved to Florida after his 2008 run for president, his PAC never left Arkansas.

After living for a decade on the Gulf Coast, Huckabee announced in December that he would be selling his home and moving back to the Natural State, where his daughter, Sarah Huckabee Sanders, is a candidate for governor.

In an interview, Democratic Party of Arkansas Chairman Michael John Gray said he believes there's a connection between the uptick in Huck PAC giving and Sanders' gubernatorial bid.

After a decade as an out-of-state resident, "I think it's about buying the Republican Party back. Absolutely," he said.

The PAC's uptick and Sanders' 2022 political ambitions, Huckabee said, are not intertwined.

"Sarah's running had nothing to do with our ramping up the PAC since we started doing that almost 2 years before she decided to run," Huckabee said.

For now, Huck PAC is focused on another governor's contest -- the one in California.

With the current officeholder, Gavin Newsom, facing a possible recall vote, Huck PAC has begun pouring money into the campaign.

A March 1 Sacramento Bee article said many non-Californians are donating to the cause, but "the biggest out-of-state spender, by far, is former Arkansas Gov. Mike Huckabee."

By that point, Huck PAC had already contributed $100,000 for the effort, the paper stated.

In an email, Huckabee said his PAC is "heavily invested in the recall race in CA for Gavin Newsom and he even called me out by name on TV and called out HuckPAC."

It's an acknowledgment Huckabee relished.