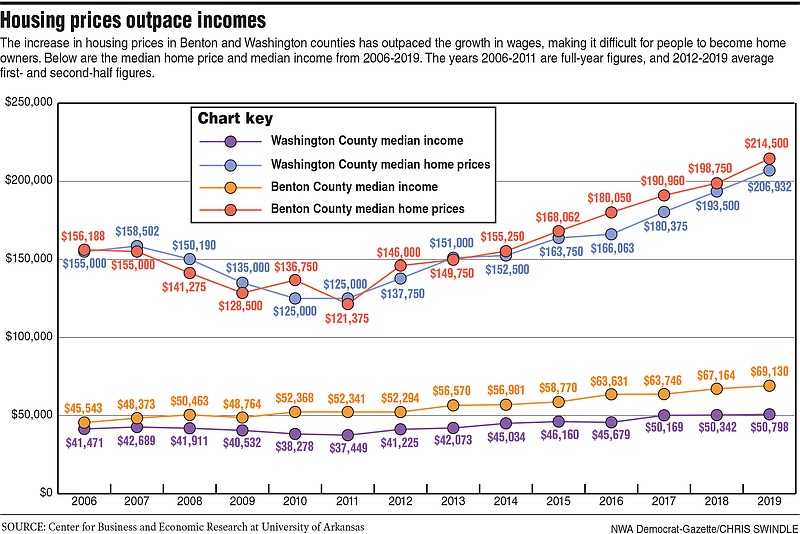 Editor’s note: This story is first in a four-part series exploring the challenges and possible solutions for providing affordable housing in the region’s larger cities.

People in Northwest Arkansas' larger cities pay more to live and get around -- as a percentage of their incomes -- than do residents in New York City or Chicago, a nonprofit's recent survey shows.

It's a problem that leaders in the region say needs to be addressed, but how is a big question.

Its maps show housing and transportation costs gradually increasing the farther out of cities people live in Northwest Arkansas.

The region is following a pattern that every booming American region experiences, say area economists, planners and developers.

Most jobs, shopping and entertainment venues are in downtowns. Housing close to those areas becomes expensive. Developers move farther out from city centers to build housing, and the people needed to work in downtown businesses move farther out to find housing they can afford, which adds to their transportation costs to get to work.

"No city in the U.S. has done this successfully," Mervin Jebaraj, director of the Center for Business and Economic Research at the University of Arkansas, Fayetteville, said about breaking the pattern.

"Look at any region that has rapid growth, and that's exactly what's happening in Northwest Arkansas."

There is still time to chart a different path for housing in the region, Jebaraj and others say, but changing direction won't be easy.

No single organization can tackle an issue as complex as affordable housing, said Karen Minkel, Walton Family Foundation Home Region program director. The foundation is collaborating with regional organizations, nonprofits, cities and property developers in a bid to find a solution.

Matthew Hoffman, an architect and former member of the Fayetteville Planning Commission, thinks the best solution is obvious: Build neighborhoods as they were built before people became dependent on automobiles; and have shopping, dining and workplaces within walking distance in neighborhoods.

"We know people will live in places like these," Hoffman said. "We know because places like these already have the highest housing prices. You have to have lived there for 40 years or be a millionaire to get into one."

He pointed to the Wilson Park neighborhood and the downtown Dickson Street area in Fayetteville as examples.

They worry about property values.

"Name me an area where a project like that went in and local property values went down," Burckart said. "You can't."

Loans, grants and other financial support for private investment and government incentives are available, Burckart says, but the will to change is lacking.

"If we don't do something, the people we need for our economy to grow will not be able to afford to live here," he said.

Hoffman said, "we tried a mixed-use city plan in Fayetteville, and every available lot wound up having a duplex built on it."

That's because every other new construction had to have a drainage plan. Duplexes didn't. So it was simpler to build a duplex.

Ward Davis -- president of High Street, a Springdale-based real estate and development company -- is the immediate past president of the National Town Builders Association, a group of builders and developers who support creative projects.

"I had a development planned for Fayetteville all the way through the planning and approval process, and one resident convinced one City Council member to question whether to grant a variance," Davis said.

That delayed the project for weeks. In the interval, lumber prices spiked, killing the project.

But, housing and transportation aren't the only costs involved with urban sprawl. Sustaining the infrastructure -- wastewater, roads, police and protection -- farther out also carries a hefty price tag.

"Even in the best years for the economy, it is unlikely that wages will rise fast enough to keep up with the home price growth we have seen here and in other high-growth markets," he said.

Over time, people with the highest incomes will push others out of the housing market, he said.

And the boom in apartments for university students in Fayetteville doesn't change the housing shortage problem for permanent residents, Jebaraj said. Those apartments fill the need for students, but are designed for them. Students often have roommates to share the costs.

"These are not working-class apartments."

McNaughton said he grew up on a farm between Hogeye and Strickler, which is south of Prairie Grove. His relatives worked in Fayetteville. They decided to calculate how much living out of town cost them, including "the wear and tear on our vehicle of going up and down a dirt road." They determined that they could save nearly $300 a month by moving into town. Their ownership of property out of town helped them build up equity that they used to be able to afford to live in town.

He advised people to buy property "even if it's small, and build equity."

"You have to buy right now," she said. The couple realized that they could not save money fast enough to outpace rising house prices in the area, so they went ahead and bought.

"It's definitely a little scary, but we're excited," she said.

But building also has gotten more expensive. Across the nation, the construction industry is seeing shortages of basic materials and resulting rising prices.

During the pandemic, plant closures disrupted the building materials supply chain, Davis said. "I had a supplier for hardwood floors where a typical order of ours could be filled in two weeks when we ordered a year ago," Davis said. "Now it's seven or eight weeks."

And, he doesn't expect a sudden drop-off in prices.

Meanwhile, Neil Adams of Legend Realty said "almost any house that goes on the market [in Northwest Arkansas] is going to get multiple offers. Some homebuyers are desperate after they made two or more offers on houses and were outbid, so they offer a price when they know the appraisal won't be that high. They're not going to get a loan for more than the house appraises for. They have to make up the difference."

Compounding all of this in Northwest Arkansas, developers say, is the loss of skilled labor. The region never recovered from the toll the burst housing bubble in 2008 and 2009 took on the skilled workforce.

"We had a workforce during the boom years and a construction capacity we just don't have today," Davis said.

That's curbing construction in the region.

Gilbert Harvey, who tracks employment statistics as chief operating officer for the Northwest Arkansas Council, said "we're getting about half as many new listings every day as we used to get" before 2009. "We're getting twice as many houses sold per day as we used to." The supply, therefore, dwindles every day.

And "it's getting worse," he said.

"We're looking at an inventory of weeks," Burckart said of the available housing supply in the region. "We're already in an affordability crisis for the majority."

And when interest rates, currently at historic lows, go back up, housing will become even more expensive, he said.