That fateful day the curtains closed on Broadway 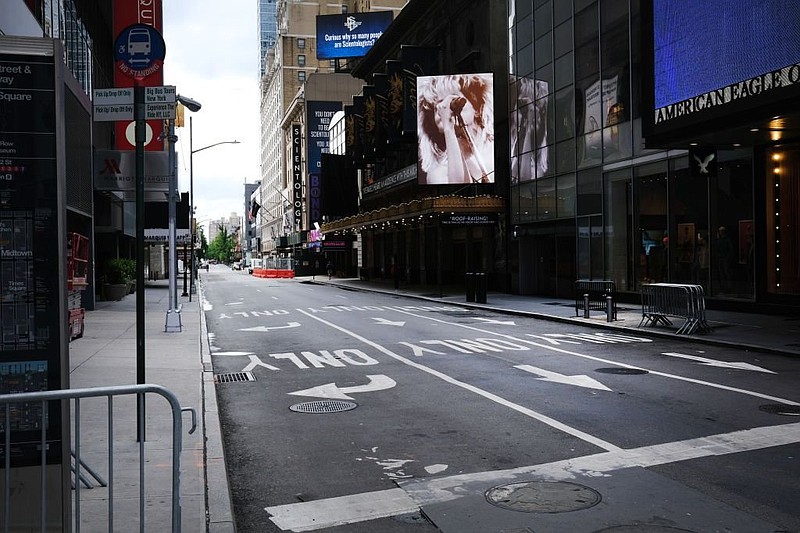 Broadway theaters stand closed along an empty street in the theater district on June 30 in New York. At the one-year anniversary of the fateful day, with the pandemic raging but in retreat, hopes for the industry’s return have crept up on the horizon. (Getty Images/TNS/Spencer Platt)

NEW YORK — Ben Crawford, the phantom in Broadway's "Phantom of the Opera," stepped off the stage midway through the first act on the afternoon of March 12, 2020, and headed toward the dressing room.

He had just made his first entrance, singing "Stranger Than You Dreamt It" to a crowd of more than 1,000 at the Majestic Theatre, when the show's stage manager delivered the news.

Broadway, the beating heart of Midtown, would close its 41 playhouses at 5 p.m. due to covid-19.

"Phantom" would be The Great White Way's last performance for at least a month.

Crawford and the rest of the cast soldiered on, while the rest of New York watched life screech to a stop.

Across town, Daniel J. Watts was sitting in his Harlem apartment, "halfway in a huff" in his words, after deciding that the mushrooming health crisis felt too risky and that he would not show up for his starring role as Ike in "Tina: The Tina Turner Musical" that night.

After the NBA suspended its season the previous night, Watts had stocked up at a Midtown grocery store and prepared to lock down. When the word came that the Theater District would close, he could exhale.

At a Department of Motor Vehicles office in New Jersey, Diana Diaz, the head usher for the Ambassador Theatre, received a call from another usher who delivered the news. Diaz was getting a license to make flights to visit her children in Florida easier.

But in the year since, she said, her only travel has been to her second job as an administrative assistant in Manhattan.

The day the lights flickered out on Broadway cast a long shadow on the theater industry.

Workers have been left to find new sources of income, at least four productions have been permanently sunk by the virus and the theater community has reeled. Broadway has lost an estimated $35 million in gross revenue each week.

At the one-year anniversary of the fateful day, with the pandemic raging but in retreat, hopes for the industry's return have crept up on the horizon, perhaps as soon as late summer or early fall. The storm seems, at long last, to be lifting.

But theater workers looking back to a year ago said they didn't have a clue how long the shutdown would last.

"None of us in our wildest dreams imagined that we'd still be here a year later," said Kathryn Gallagher, who stars as Bella in "Jagged Little Pill."

Though virtually every corner of the entertainment world froze in the terrible spring of 2020, Broadway's surrender struck a blow at the heart of the New York ethos.

Broadway's signature slogan — "the show must go on" — attests to its formidable resilience. Midtown's prestigious playhouses did not close for the 1918 flu pandemic, and they roared back just two days after the Sept. 11, 2001, attack on the World Trade Center.

Weekslong strikes brought Broadway to its knees in 1975 and 2007, but no pause in history compared to the monthlong freeze announced on March 12, 2020.

In the days before the closure, as the new virus cast its grisly spell on Europe, performers had made small adjustments.

On March 11, news broke that a positive coronavirus test had come back for an usher who had worked at two productions in previews: a revival of "Who's Afraid of Virginia Woolf?" at the Booth Theatre and the pop musical "Six" at the Brooks Atkinson Theatre. Theater companies were on edge.

Brenock O'Connor, a British actor preparing for his Broadway debut, stepped onto the historic theater's stage for the first time ever as the production began tech rehearsals.

Four blocks uptown, Charlotte St. Martin, the president of the Broadway League, was meeting with 63 people — producers, general managers and theater owners among them — representing every show on The Great White Way at the time. She was also consulting with the governor's office in Albany.

In midafternoon, the governor's office confirmed that it wanted Broadway to shutter. Sixteen shows were scheduled to open in the next two months as the Tony Awards approached.

"It was very sad, very scary, heartbreaking," St. Martin said. "You know the impact of how many people are going to be out of work. Not just that work directly for Broadway, but that service Broadway — the cleaners of the costumes, the costume designers themselves, and then the restaurant and hotel workers that are in the area."

It was a particularly heart-rending moment for "Six," which was set to open the night the curtain fell on Broadway. Government and theater leaders faced a dramatic decision with scant information about the mysterious ailment, said Kevin McCollum, one of the show's producers.

McCollum, a powerful force in theater for more than a quarter-century, produced the hit "Rent," which burst back onto the stage after 9/11. "The rest of the country had energy to get to New York," he said.

In 2020, the city stood alone. Streets emptied as cases multiplied, the virus derailing life in America's most densely populated metropolis.

Broadway, mostly squeezed into a 13-block radius, is a uniquely tight-knit community, and its performers share crowded quarters. The Theater District was always destined to close, and its dazzling shows are predicted to be among the last elements of city life to return after the coronavirus crisis.

Still, for O'Connor, watching New York shut down last March was a shock. He woke up the morning after the shutdown to an eerily quiet Midtown Manhattan.

"As an English kid, I thought New York stops for nothing," he said. "Seeing it like that really hit home that we were about to live through an apocalypse movie."

Broadway, scarred by the pandemic, has repeatedly extended its shutdown. But in the year Broadway went dark, theater never vanished completely. Working remotely, actors have cobbled together reams of virtual performances.

Andrew Lloyd Webber, the giant of musical theater who composed the music to "Phantom," held social-media singalongs from isolation.

And since the start of the shutdown, Broadway buffs Seth Rudetsky and James Wesley have hosted titans of the stage on their daily music-infused streaming talk show, "Stars in the House," raising more than $700,000 for the Actors Fund, a nonprofit that supports theater workers.

Also keeping the magic alive: the rollout of streaming performances, such as the summer release of "Hamilton," and a flood of holiday fare headlined by a special solo recording of "A Christmas Carol" that starred Jefferson Mays and was filmed at the United Palace in Washington Heights.

Meanwhile, the stars and staffs of Broadway's shows have taken a range of tacks to keep busy.

Dede Ayite, a Ghanaian-born costume designer who tailored shows such as "A Soldier's Play" and "Slave Play," became a plant mom, too.

She said she moved from Harlem to Flatbush and took a "step back," going for long walks, revisiting her past art, and imagining how she'll modify her work when theater returns.

"We need theater. We need the arts," Ayite said. "We're resilient people. So people have been making do, and they've been trying their best to survive and stay sane."

She said she hopes the long, deep breath Broadway has taken triggers changes in the industry, including improvements in accessibility and opportunity.

In the spring, after brutal police killings of Black Americans prompted a national reckoning over racism, the star-studded coalitions Black Theatre United and We See You, White American Theater emerged to fight racism in the theater. The groups are part of an effort to address continued failures of racial representation in the arts.

"Broadway has both had to face certain things, but also — because we haven't been up and running — certain things have yet to be actually faced," said Daniel J. Watts, a Tony-nominated actor in the musical "Tina."

THE SHOW WILL GO ON

As painful as the past year has proved, it has perhaps opened a door to a more inclusive Broadway. Certainly, it has showcased that even without in-person performance, the arts can march on.

"It's going to be so exciting," Gallagher said. "I just keep dreaming of that first curtain call, and that first step on stage."