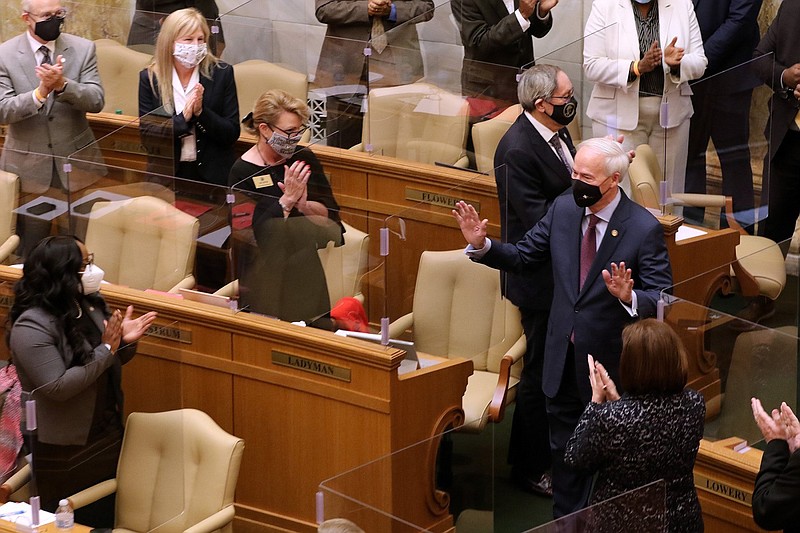 Gov. Asa Hutchinson enters the House chamber at the Capitol in Little Rock on Tuesday, Jan. 12, 2021, before giving his State of the State speech to a virtual joint session of the General Assembly. (Arkansas Democrat-Gazette/Thomas Metthe)

Gov. Asa Hutchinson signed bills last week that are part of his legislative agenda, one to make computer science a graduation requirement for public school students and another to allow Arkansas State Police troopers to retire at any age after 28 years of service, instead of 30 years.

The Republican governor said he also has signed legislation stemming from his Task Force to Advance the State of Law Enforcement, "so there are three parts of my legislative package that have been signed into law.

"It is a good point in the middle of the session to reflect on what has been accomplished in terms of my particular agenda, but also the work that still remains to be done," Hutchinson said last week at the outset of his weekly covid-19 news conference.

He said boosting the average public school teacher's salary is part of his legislative package and the House has approved that bill.

Hutchinson said his goals for this session included reaching agreement with lawmakers on changes to the state's Emergency Services Act, "and we are very satisfied with it."

Act 403 resulted from Senate Bill 379 by Sen. Kim Hammer, R-Benton. Under Act 403, the Legislative Council this morning will consider the governor's request for a 60-day extension of the public health emergency amid the covid-19 pandemic.

"What remains to be done would be issues of tax cuts, [adding] $100 million in the long-term reserve fund and the needs-based scholarship," the governor said.

Act 414 -- which was Senate Bill 107, by Sen. Jane English, R-North Little Rock -- will require a public high school student to earn one credit in a state Department of Education-approved high school computer course before graduation.

The requirement begins with the class entering ninth grade in the 2022-23 school year. One unit of computer science may be earned in grades eight through 12.

The law requires the Education Department, beginning in August 2022, to make available to all public schools high-quality digital content aligned with state board-approved computer science classes. The law will mandate each public school district to employ a computer science teacher at each high school starting with the 2023-24 school year.

"To graduate from high school in Arkansas, you either have to have a computer science course in the career technical field or in the core subject field," Hutchinson said. "It can be considered as a science or a math credit, as well. This bill allows Arkansas to stay in the forefront of national leadership on computer science education."

Act 415 -- House Bill 1343, by Rep. Les Warren, R-Hot Springs -- reduces by two years the service required by troopers in the Arkansas State Police Retirement System to retire at any age.

Act 415 will increase the multiplier, used in calculating retirement benefits, for tier 1 members from 1.55% to 1.66% and the multiplier for tier 2 members from 2.475% to 2.65%, with the aim of allowing retirees to receive the same credit after 28 years that they would have received if they had retired at 30 years, Warren said.

The law will require the Division of Arkansas State Police to increase its contributions to the retirement system to 26% of members' payroll, up from 22%, to cover about $700,000 of the $1.2 million projected increase in annual retirement costs. Hutchinson has committed an additional $530,000 to cover the difference, according to Warren.

Hutchinson said the change equalizes retirement provisions for state police officers with others in state government.

The law would require new and reactivated law enforcement agencies to have a full-time police chief.

The law also will require police agencies to report to the commission when officers leave because of excessive use of force, dishonesty or untruthfulness.

Hutchinson said his legislative package includes a bill that aims to raise Arkansas' average teacher salary by $2,000 over the next two years, from $49,822 to $51,822.

House Bill 1614, by Rep. Bruce Cozart, R-Hot Springs, which would create a new category of education funding, has cleared the House of Representatives and is in the Senate Education Committee.

The bills would raise the average salary in school districts that are below the median, Hutchinson said.

Hutchinson proposed that the General Assembly approve $50 million a year in income tax cuts for moderate- and low-income Arkansans, reduce the top rate from 5.9% to 4.9% for new residents for five years and cut the sales tax on used vehicles valued between $4,000 to $10,000 from 6.5% to 3.5%.

"I remain supportive of each of those items but the tax reduction for small businesses who received federal loan forgiveness funds left the state with an unexpected $179 million tax cut for this upcoming year," Hutchinson said Friday in a written statement. But state officials have said their revenue forecast didn't count on collecting that tax revenue.

"This will require both the Administration and the General Assembly to reexamine which additional tax cuts can be safely accomplished," the governor said.

All three bills were presented to the House Revenue and Taxation Committee last week.

"A sales tax reduction for used cars, if passed, meets the objective of a tax cut for low and middle income Arkansans," Hutchinson said. "A rate reduction from 5.9 to 5.8 is doable as well."

In November, the governor proposed devoting $100 million of the state's $240 million surplus, collected prior to fiscal 2021, to the long-term reserve fund, which he has called a savings account.

The fund has accumulated about $209.9 million, and the governor aims to boost it to $420 million by the end of his gubernatorial tenure in January 2023.

He said the Education Department is checking the bill against one introduced by Senate President Pro Tempore Jimmy Hickey, R-Texarkana.

Information for this article was contributed by the Rachel Herzog of the Arkansas Democrat-Gazette.