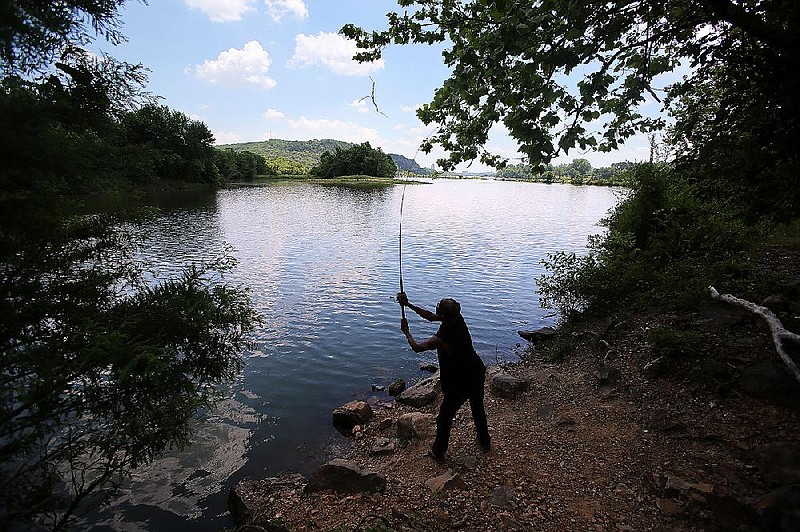 A bill in the Arkansas Senate's Agricultural Committee aims to generate about $250 million for the Arkansas Game and Fish Commission over the next 10 years by raising the prices of resident hunting and fishing licenses, permits and stamps.

Sen. Ben Gilmore, R-Crossett, said the bill would double the costs of hunting and fishing licenses for Arkansas residents.

Pat Fitts, Arkansas Game and Fish Commission director, acknowledged that the bill as filed doubles license prices, but said the increases would be less in the final version. The bill must receive enough votes to advance out of committee before the full Senate can act on it.

"That won't be the bill that moves forward, I'm pretty sure," Fitts said.

In fiscal 2019, the Game and Fish Commission sold 312,758 resident fishing licenses and 220,193 resident hunting licenses. License sales increased significantly in 2020, but itemized numbers were not available at press time.

The commission, which is constitutionally independent from the Legislature and executive branch, also receives 45% of proceeds from a statewide, one-eighth percent sales tax, as well as portions of federal excise taxes on hunting and fishing equipment, including firearms, ammunition, optics, rods, reels and fishing tackle. It also receives a portion of a federal tax on marine fuel sales.

Section 3(A) (i) of the bill would double the baseline maximum.

Subsection (ii) specifies the sum of the baseline maximum and its proportional fee adjustment based upon the total increase of the xonsumer price index for all urban consumers issued by the United States Bureau for Labor Statistics since the baseline was established or last adjusted. According to the U.S. Bureau for Labor Consumer Price Index calculator, the rate of inflation since 1984 is 153.14%. That means $1 in 1984 would be worth $2.53 in 2021.

Using the second formula in subsection (ii), the increase for resident hunting licenses would be slightly higher. A resident fishing license would increase to $26.

Gilmore said he believes his constituents would support a more modest increase, but the proposed increases are too high.

"I have talked with many of my constituents about this increase proposal," Gilmore said. "Many see the need for more dollars to improve infrastructure, especially after three decades of there not being a fee increase, but most feel that an increase of this kind is too egregious and too much to ask them to pay, especially coming out of the covid pandemic when many of my constituents have been hit hard financially. Asking them to pay double the price to hunt and fish in our state is going too far."

Fitts said aging Game and Fish Commission infrastructure must be repaired, overhauled or closed. For example, he said, the commission owns 48 dams -- more than any other landowner or agency. A recently completed renovation of Lake Poinsett took three years and cost $3.5 million. Renovations at Lake Elmdale near Springdale will soon be complete, and then a renovation of Lake Wilhelmina in Polk County will begin.

According to the commission's project chart, about $49 million is needed to renovate green tree reservoirs and wildlife management areas. About $13 million is needed to renovate fish hatcheries and commission lakes. The Spring River Fish Hatchery at Mammoth Spring supplies trout for Arkansas streams. Fitts said it is currently operating at about 40% capacity and needs to be brought back to full capacity to maintain the quality of Arkansas trout fishing.

"The $250 million is just for what we know," Fitts said. "That doesn't take into account the call you get next week that something is broke and needs immediate attention. I'm hoping to avoid the day when we have three or four critical failures at once and we have to make that decision to close them."

Gilmore said he believes the commission's infrastructure crisis is authentic, but he said the commission should be sensitive to the economic and financial concerns of residents who are struggling with increasing prices for fuel, food and other staples.

"I think we understand there are infrastructure needs that require the finances to fix and maintain them," Gilmore said, "but we also have to make sure that we are being fair to hunters when asking them to pay substantially higher fees for something that is so important to them."

Fitts said that is precisely why he believes Arkansans would support an across-the-board license fee increase.

"I think the public will be willing to pay a little bit more to make sure places are kept open, accesses are maintained and that these places around the state are still usable when somebody gets off work and goes to the lake," Fitts said.

He said that higher hunting and fishing license fees would be more competitive than the cost of other entertainment, like going to the movies, especially since a license is valid for one year.

"If I'm looking at an either-or, I'd take a few extra dollars on an annual license," Fitts said. "Break it down over the course of a year, and you might be looking at $1 or $1.50 over a month.

"The place you hunt and fish might be in great shape now, but there will come a day when it won't be."

Increasing license fees might have the unintended consequence of pricing people out of hunting and fishing, Gilmore said, adding that it might disable their ability to exercise their right to hunt and fish under Amendment 88 to the Arkansas Constitution.

"Our goal is to see more people engaged in conservation and hunting and fishing in our state," Gilmore said. "We don't want to create a situation where we are pricing them out of those activities when arguably they have a constitutional right to hunt and fish and utilize our state's natural resources."

Gilmore said the Game and Fish Commission appears to have allowed its infrastructure to languish while devoting resources to nonessential projects.

"I understand there are needs that require the finances to address those needs, but some of these stem back decades in the past," Gilmore said. "We can't expect hunters and fishermen to be willing to pay double to fix these needs. I still have many questions as to projects that are proposed and how long they have sat dormant not being fixed.

"I want to make sure funds will go to projects they have proposed and not to other needs within the agency."

Fitts said the additional money would not be used for salaries and vehicles, and that all of the anticipated revenue is already earmarked for specific projects. However, he said the cost of the projects will continue to increase as inflation increases, and emergencies occur every year that require significant money.

Fitts cited major flooding on the Arkansas River in 2019 that flowed backwards up Palarm Creek into Lake Conway and threatened to dislodge the Lake Conway dam.

"We want to focus those dollars on infrastructure," Fitts said. "We're an old agency. We have quite a bit of things. We need to make a substantial reinvestment in Arkansas.

"When you take a FEMA event that disrupts things that we have like what occurred with the Arkansas River, when the event is over, we spent close to $2 million getting things back usable after water went down. That's hard on your budget, and it's hard to move these projects when you're focusing on some of these events. We seem to have more water than we've ever had, and it's a recurring thing."