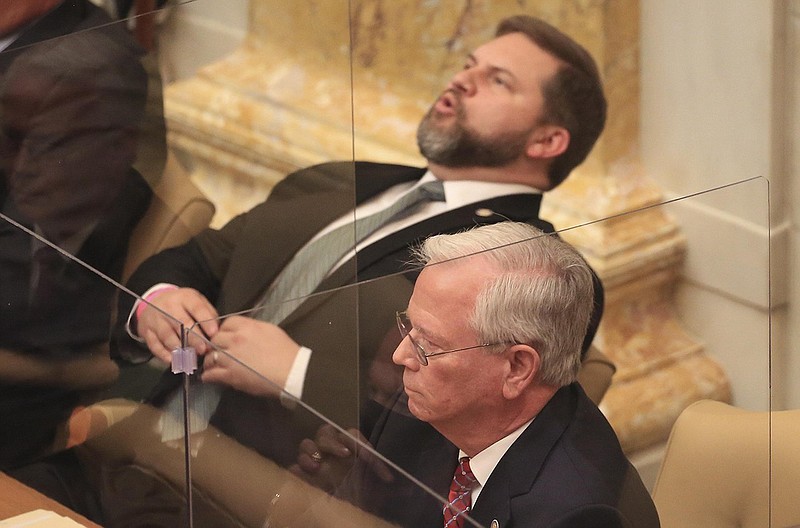 For the third consecutive legislative session, a Republican-sponsored bill to fund private school tuition with public dollars failed in a majority-GOP Arkansas Legislature.

It’s likely similar legislation will emerge in the future, though the efforts have divided the party.

“It had a polarizing effect, had friends not speaking to friends up here for a little while,” Rep. Mark McElroy, R-Tillar, said.

House Bill 1371 would have created a state income tax credit to fund up to $4 million in private-school vouchers, for about 570 students, as well as a grant program for public schools with high populations of low-income students of up to $6 million.

The measure failed on a 52-44 vote earlier this month.

Sponsor Rep. Ken Bragg, R-Sheridan, said he was sure it would come back in some form in a future session.

While supporters of the bill said it would increase access to individualized education programs for students in need, Republicans who voted against the bill said they did so because of fears about how the program might negatively affect public schools.

Some represent rural areas without many, if any, private schools.

“We have enough trouble trying to fund public education. We really need to put more funds in it,” McElroy said.

Public school superintendents have been among the most vocal opponents of voucher programs in Arkansas. The Arkansas Education Association also opposed HB1371.

Bragg said superintendents’ opposition was the chief reason why the bill failed.

“Most of the people that I talked to felt like it was a good bill and they saw a lot of merits in it. … The pressure superseded the merits of the bill,” Bragg said.

The Arkansas Legislature approved the Succeed Scholarship program during the 2015 session. Managed by the Reform Alliance, the voucher program provided 665 scholarships worth about $7,000 each for foster children and students with disabilities.

On Twitter the day after the vote, Reform Alliance board President Laurie Lee accused a dozen Republican representatives of saying they would be supportive of the bill, then reneging.

“I encourage you to share with them that they work for you, our families and our communities — not their superintendents or special interest groups,” she wrote. Lee wasn’t available for an interview Friday.

Several lawmakers on the list said it was untrue that they’d committed to supporting the bill.

“I made it clear that I was listening to the debate,” Rep. Jimmy Gazaway, R-Paragould, said Thursday. “I don’t recall having an experience like that on any other issue so I found it to be a little unusual and disturbing.” Rep. Bruce Cozart, R-Hot Springs, said he voted for the bill when it came before the House Education Committee because he thought it deserved to be debated by the entire House. Cozart is the committee chairman and cast the 11th and final vote, but didn’t vote when the bill was on the House floor.

Cozart said he had always been against the bill because it didn’t guarantee money for public schools, though he said he liked the concept.

DeAnn Thomas, communications director for the Reform Alliance, said some who had originally supported the proposal later backed down, including co-sponsor Rep. DeAnn Vaught, R-Horatio. Vaught wasn’t available for an interview.

“Legislation that gives families more freedom in making decisions about their children’s education has been passed in many states already, and more programs are currently being considered. … We sincerely hope Arkansas doesn’t get left behind in improving educational opportunities for our students,” Thomas said in an email Friday.

Rep. Keith Slape, R-Compton, said he’d told a lobbyist he would support the bill, but “had to change direction” because of public school parents, teachers and superintendents in his district who had asked him to oppose it.

He said the issue was “particularly polarizing because the party platform’s one way but in rural Arkansas with public schools and no charter, no private, it’s like you’re taking the money away from the public schools.” The state Republican Party platform states: “Arkansas’ children deserve a world-class education, developed by parents, educators and leaders accountable to our citizens, regardless of their ZIP code. This requires openness to every type of educational system available: homeschooling, distance learning, public school, private school, charter school, and vocational or technical school. Every tool should be given equal consideration and utilized in a manner that puts the student’s needs above all to secure the people the advantages and opportunities of education.” “We understand this is an issue where legislators have been split over the last few sessions, but we continue to believe that education requires an all-of-the-above approach, as outlined in our platform,” Seth Mays, a spokesman for the Republican Party of Arkansas, said in an email Friday.

Asked about divisions among Republicans over the issue, Mays said the party “trusts all of our elected officials to best represent their constituents, and do not see it as our job to police members or question the sincerity of their beliefs or votes.”