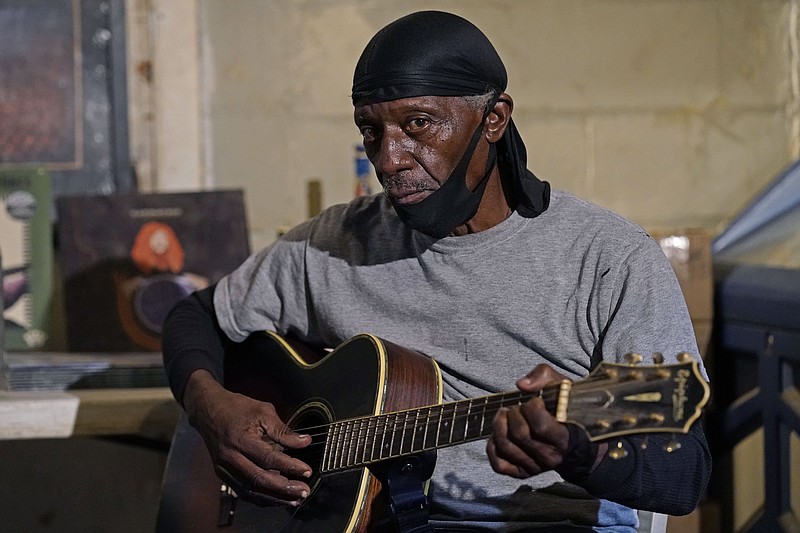 BENTONIA, Miss. — With callused hands, Jimmy "Duck" Holmes plucks an old acoustic guitar at the juke joint his parents started more than 70 years ago. He checks the cafe's inventory: jars of pickled eggs, beef jerky, pork hocks. He tends to the wood-burning stove, made from an oil-field pipe. And every morning, he eventually settles in on a stool behind the counter, waiting — hoping — that someone who wants to hear him play will drop in.

Holmes, 73, is the last Bentonia bluesman, the carrier of a dying musical and oral storytelling tradition born in this Mississippi town of less than 500 people. He's a Grammy-nominated artist, with a recent nod in the best traditional blues album category for "Cypress Grove," a record he hopes will help preserve the Bentonia blues long after he's gone. (The album was beaten by "Rawer Than Raw" by Bobby Rush.)

The world has changed around Holmes and his Blue Front Cafe, the country's oldest surviving juke joint. Across the South, the venues — historically owned and frequented by Black people — have shuttered as owners pass away. Blues experts believe Holmes is the only American running a juke joint owned by his parents.

It's quiet outside the Blue Front, a small building with cinder block walls off a dusty rural Mississippi road. Across the street are the railroad tracks that run through Bentonia; next-door sits an old cotton gin.

It's here, at the Blue Front, that Holmes watched the March 14 ceremony and learned that Bobby Rush's "Rawer Than Raw" had won the award. He couldn't go in-person because of the coronavirus pandemic, and that suited him just fine. He was surrounded by musicians from across Mississippi who wanted to play with him.

"I'll be here in this hole in the wall every day, for as long as I can, so that people don't forget," Holmes said. "We're trying to make sure it doesn't die."

[Video not showing up above? Click here to watch: arkansasonline.com/330holmes]

When the Blue Front opened in 1948, it was the first Black-owned retail business in Bentonia, a then majority-Black farming community. Holmes was just a baby. His parents, Carey and Mary, were sharecroppers.

Mary ran the Blue Front during the day while Holmes worked with his father in the fields. By age 9, Holmes was operating a tractor by himself.

The Holmeses' business was a community gathering place. People came to have their laundry pressed, get a haircut, or pick up salt, pepper and other nonperishables.

And they came for the blues. Musicians lined up outside to play the Blue Front, with guitars strapped to their backs and harmonicas in their pockets.

During cotton-picking season, the Blue Front was open 24 hours a day to accommodate farm workers, who came in for a hot plate of Mary's famous buffalo fish. On weekends, people stayed all night drinking moonshine, dancing and playing music.

The town was never home to more than 600 residents, but its location on the Illinois Central Railway drew visitors. Later, the only roadway from Memphis to Jackson (now U.S. 49) passed directly through Bentonia, furthering its popularity.

Historians traveling through Mississippi to document blues musicians discovered Bentonia's style. It's described as haunting and eerie; its minor tonality isn't found in the better-known blues styles of Delta and hill country.

Growing up, Holmes learned from his neighbor, "the father of the Bentonia blues." Henry Stuckey, an aging World War I veteran, played to entertain Holmes and his 13 siblings on their porch.

The style is passed from one musician to the next — it can't be learned using sheet music.

"The old-timers I learned from couldn't read, and they couldn't read sheet music," Holmes said — he doesn't read music, either. "They didn't know what a count was, didn't know about minors or sharps or open or closed tuning. They was just playing. They had no idea there was a musical language to what they were doing."

Dan Auerbach, producer of "Cypress Grove" and a member of the band the Black Keys, said the beauty of Holmes' music is the improvisation. Holmes never plays the same song twice. Each performance is a snapshot in time.

"Those songs, they're like a living organism, almost. They're changing daily," he said. "You can feel the realness and the immediacy of the music. It's very idiosyncratic, and that's what makes it so special.

"Now, in this day and age, it's like everything's homogenized and we're all on the same server. Jimmy 'Duck' Holmes lives in a world that time forgot — it hasn't changed."

Gallery: Born to the blues

Today, a four-lane highway diverts traffic away from Bentonia. Businesses of Holmes' youth have shuttered; buildings are torn down. More than a quarter of residents live under the poverty line.

The train passes through town daily but doesn't stop.

"People my age was tired of going to the cotton fields," Holmes said. "As soon as they got a chance, they got away from Bentonia, to Chicago, California, New York. There wasn't nothing here."

Holmes never imagined leaving. He lives on the same farm where he was raised, about a mile from the Blue Front.

His presence has become Bentonia's biggest draw. Visitors come from all over the world and the music industry to see him, to hear the music, and to learn the tradition.

Before the pandemic, Mississippi musicians performed at the Blue Front every other Friday, sometimes more, playing different blues styles. In 1972, Holmes started an annual blues festival, now the longest-running in Mississippi.

He holds Bentonia Blues workshops. And every day that he sits behind the counter at the Blue Front, he's willing to teach anyone who walks in.

Some fans are surprised he's so accessible, said Robert Connely Farr, a Mississippi native who's been visiting Holmes for years for guitar tips, all the way from Vancouver, British Columbia, Canada. But for those who know Holmes, it makes perfect sense.

"His whole goal in life is to give that sound away, is to perpetuate or further the Bentonia sound," Farr said. "I think it's important to Jimmy, that his place is open and that it constantly has music. He wants there to be life in that building."

Holmes has performed in Europe, South America and across the United States. He opened for the Black Keys in the nation's capital in 2019. But he always comes back home.

"I would hate if someone took time out of their day to come see me and I wasn't here," he said. "I appreciate it, that people want to travel from Asia and Europe because they want to know about the blues. I like to be here when they come."

Two large portraits at his juke joint pay homage to his mentors, Stuckey and Jack Owens. Owens continued to teach Holmes after Stuckey died in 1966.

"It was a blessed gift they gave to us," Holmes said. "And they were so generous with it. What they gave us changed the world."

Holmes laments that no young people in Bentonia want to learn. They say it's too complicated. People don't appreciate how the blues influenced popular music today, how every genre has roots dating back to it, Holmes said.

But he keeps spare guitars around the Blue Front, just in case someone wants to play.

"It will survive somehow," Holmes said one gray morning in his empty juke joint. "I learned enough that I was able to carry it on, and probably once I'm gone, somebody will be sitting around here playing, someone who picked up the things that I was doing. I have to hope. I have to hope."

Leah Willingham is a corps member for The Associated Press/Report for America Statehouse News Initiative. Report for America is a nonprofit national service program that places journalists in local newsrooms to report on undercovered issues.