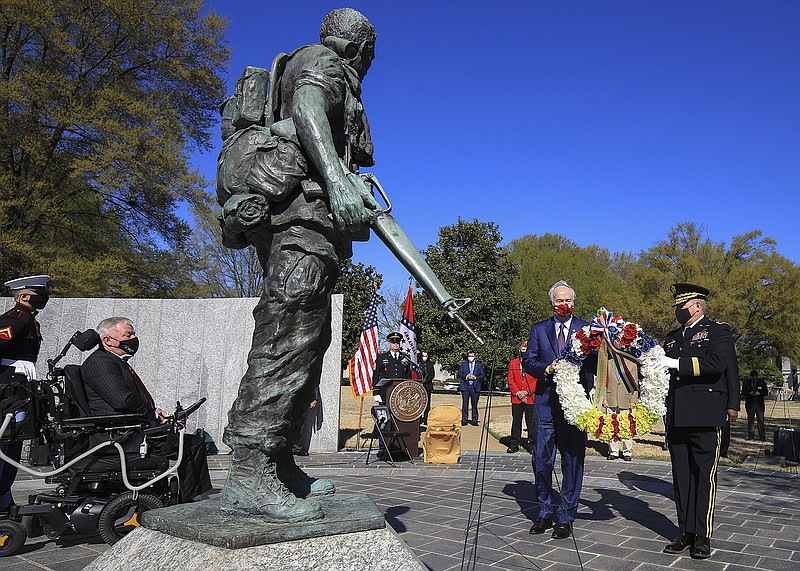 In 1967, J. Thomas "Tommy" May left his job working in the oil fields where the mosquitoes were as "big as sparrows," convinced that a life in the military would be "a lot easier."

After serving in the Marine Corps during the height of the Vietnam War, May admitted his decision to leave his oil job in El Dorado for the battlefields of Vietnam, thinking it would be easier, was a "miscalculation."

While life wasn't easy in the Marines, the military taught him the values of "working hard and doing right." Those values, tested in war, were something that May had a chance to affirm again Monday, as veterans and local officials gathered to commemorate National Vietnam War Veterans Day on the grounds of the state Capitol.

Forty-eight years after the U.S. ended involvement in the Vietnam War, many recalled the bitterness veterans felt after being shunned by a public cynical from an unpopular war.

For many, Monday's event was a chance to finally commemorate Vietnam War veterans in the way that many from previous wars have been commemorated -- as heroes.

"We all remember that Vietnam was a very unpopular war, but our veterans were not asked to vote on whether to participate, we simply responded to the call," May said. "We did it without a second thought. That is what we do."

Like other days commemorating veterans, Monday's event was a solemn affair. Gov. Asa Hutchinson and Maj. Gen. Kendall W. Penn, the adjutant general of the Arkansas National Guard, laid a wreath and a Marine played taps as service members saluted the fallen.

Command Sgt. Maj. Steven Veazey, who emceed the ceremony, was the last to leave, decorating the statue at the state's Vietnam Memorial with flags and poppies. Just before he left, Veazey draped the statue with the black POW-MIA flag, the symbol of those captured or lost in war.

Hutchinson presented May -- the former chairman and chief executive officer of Simmons First National Corporation -- with a flag, while Penn presented the Arkansas Business Hall of Fame inductee with the Coin of Excellence for his service.

"As Tommy said, it was not the most popular war, but they did their duty," Hutchinson said. "They acted courageously. They served our country. And yet when they returned, they did not have the honors that we have given to other members of the military that have served in previous wars."

Hutchinson also presented Vietnam War veteran Dwight Witcher with a flag in recognition of his service. For Witcher, who served in the Marines Corps for four years, Monday's recognition was a welcome contrast to the treatment he and other veterans received after retiring home from the war.

"Well, having come back to nothing but mostly disdain from everybody, except, you know, close friends and family, it feels good to be recognized by the public again," Witcher said. "So, there's no animosity, no held over bad feelings; it's just nice to get the recognition that so many of them out here deserve."

March 29 became the annual Vietnam War Veterans Day after former President Donald Trump signed the Vietnam War Veterans Recognition Act of 2017. The day was selected to be observed in perpetuity because March 29, 1973, was when the U.S. military dissolved Vietnam command and around the time when Hanoi released the last acknowledged prisoners of war, according to the U.S. Department of Defense.

After the ceremony, Jerrie Townsend posed for a photo in front of the wall of names of the dead at the Vietnam Veterans Memorial. She pointed to one name in particular, Don N. Mayhue, a distant relative from Stuttgart, who was killed in the war.

While Townsend didn't know Mayhue, she said the Vietnam War had a major effect on her life.

"My husband served over there, so yes, it's my generation of soldiers," Townsend said. "And everything that they said is true, it was not a good time for them coming home and we're trying, you know, trying to do some things to maybe make up for that."

But 48 years after the U.S. pulled out of Vietnam, many veterans are still living with the effects of the war. Some veterans still suffer health problems after exposure to Agent Orange, the herbicide the U.S. military extensively used during the Vietnam War.

While Vietnam veterans are now entitled to health care for any health problems determined to be caused by exposure to Agent Orange, many of those who have fought in Vietnam haven't sought out health care from the U.S. Department of Veterans Affairs.

Nate Todd, secretary of the Arkansas Department of Veterans Affairs, said many Vietnam veterans are "hesitant to embrace the VA health care system" because of a lack of trust with the federal government.

"So this is important that veterans get enrolled in VA health care and file claims not only for them but for their spouses," Todd said.