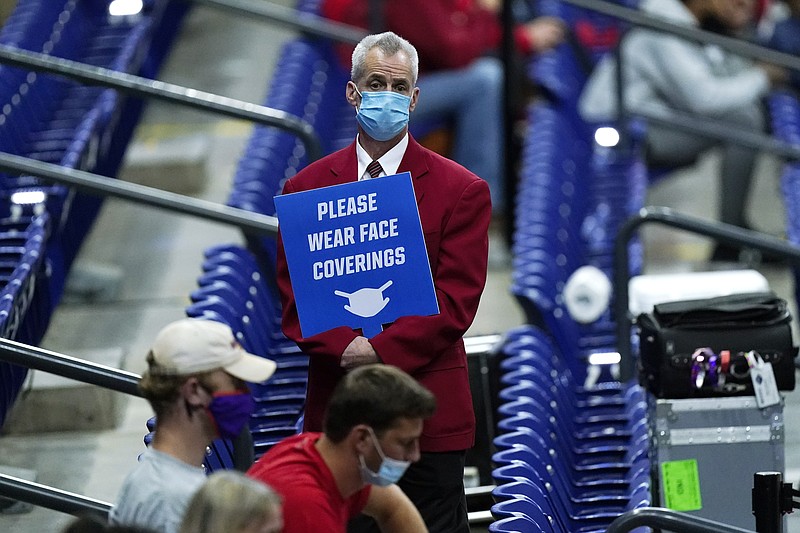 FILE - In this March 21, 2021, file photo, an usher holds a sign reminding fans to wear masks during a college basketball game between Houston and Rutgers in the second round of the NCAA tournament at Lucas Oil Stadium in Indianapolis. President Joe Biden's pleas for states to stick with mask mandates to slow the spread of the coronavirus were being largely ignored Tuesday, March 30, as several Republican governors stayed on track to drop the requirement in their states. (AP Photo/Mark Humphrey, File)

President Joe Biden's pleas for states to stick with mask mandates to slow the spread of the coronavirus were being ignored in some states Tuesday as several Republican governors stayed on track to drop the requirement in their states.

Biden and the director of the Centers for Disease Control and Prevention said a day earlier that this is no time to relax safety measures.

"It's important for people to hear that we're still in a war with this virus, and people still need to be vigilant in order to return to normal," Psaki told reporters Tuesday.

As more vaccines are deployed -- with the nation on track to deliver 200 million doses overall by today -- whether to enforce the wearing of masks has become the latest partisan focal point in the battle against the virus.

"We made our decision in Arkansas based upon the criteria we set," said the Republican, who last month set targets for test positivity and hospitalizations in order for the state's requirement to expire. "This is a goal we had. We achieved that, so we stuck with the principle that was outlined."

Alabama Gov. Kay Ivey intends for her state's mask mandate to end on April 9 as planned, though she urged people to wear masks as a matter of personal responsibility.

"We have made progress, and we are moving towards personal responsibility and common sense, not endless government mandates," said Gina Maiola, Ivey's spokeswoman.

The Republican-controlled Arizona Senate voted Monday to rescind its mandatory mask policy, and the House speaker made the same move on his own authority.

That action comes on the heels of Arizona Gov. Doug Ducey's move last week to lift remaining restrictions to curb the virus. The Republican's executive order allows businesses to enforce mask mandates and distancing requirements if they want, but cities, towns and counties must lift theirs.

"My hope is he hears the president's call," Beshear said.

Oregon has one of the country's strictest mask requirements. Even high school athletes must wear them while running races.

Competitors in a race in Eugene, famed as a running mecca, have had to wear masks because the state has mandated masks be worn during all practices and competitions for high school sports, the local Register Guard newspaper reported.

A handful of coaches from across the state petitioned Democratic Gov. Kate Brown and the Oregon Health Authority last month to make cross country exempt from the mask mandate. The appeal was denied.

"I've told my team to run at an effort that allows you to keep your mask on," Sheldon High School coach Ian Dobson said. "The rules are the rules. It's a horrible message to send if we say don't follow the rules.

Scott Gottlieb, a former Food and Drug Administration commissioner under former President Donald Trump, said a surge of cases hitting Europe does not mean that a similar spike in infections will also happen in the U.S.

"Everything that happened in Europe eventually happened here. Now I think the tables have turned. We're ahead of Europe," Gottlieb told CNBC, citing higher immunity in the United States as a result of vaccinations and previous infections. He is a board member of Pfizer, which makes a covid-19 vaccine.

Whitmer appealed on Tuesday to White House officials to shift away from a strict population-based formula for vaccine allocation and instead rush more doses to hard-hit parts of the country.

"I know that some national public health experts have suggested this as an effective mitigation tool," she said during the White House coronavirus response team's weekly call with governors, according to a recording of the conversation obtained by The Post. "And I know we'd certainly welcome this approach in our state."

The accelerating pace of inoculations has not been sufficient to fend off case increases as more transmissible variants circulate in the United States, especially among young people who have fallen sick in outbreaks tied to schools. As of Monday, Michigan's seven-day average of new daily cases stood at 5,157, a 58% increase from a week ago and the steepest increase nationwide. The state, where restrictions were recently relaxed, also reported the largest growth in coronavirus hospitalizations, which rose by more than 47%.

But Jeff Zients, the White House's coronavirus coordinator, told Whitmer the Biden administration is not inclined to change its formula for allocating vaccines. Currently, the federal government sends all three authorized vaccines to states and other jurisdictions based on the size of their populations, while setting aside separate portions for retail pharmacies, federally-run mass vaccination sites and community health centers.

"We have to make sure that everything is thought through and on the table," Zients said, advising Whitmer to work with experts from the CDC to ensure the increasing supply of shots is used most effectively to protect vulnerable populations.

Zients said a record weekly allocation to states of more than 21 million doses would provide governors with additional tools to curtail the virus. He also echoed Biden's call for state and local leaders to reinstate mask mandates and pause their reopening plans.

A spokesman for Whitmer did not immediately respond to a request for comment.

The formula for vaccine allocation was inherited from the Trump administration, though Biden's team has significantly expanded the number of retail pharmacies where shots are available and has also deployed federal personnel to set up about two dozen mass vaccination sites. Biden promised another 12 in remarks on Monday. These sites are chosen because they serve residents disproportionately burdened by the pandemic, officials say.

As manufacturing continues to ramp up, some experts have suggested further changes to how vaccine is distributed.

Citing outbreaks in particular states such as Michigan, Gottlieb said over the weekend the Biden administration should "surge vaccine into those parts of the country."

With "the incremental vaccine that's coming onto the market, I think the Biden administration can allocate to parts of the country that look hot right now," he said on CBS's "Face the Nation."

By diverting some of the expanded supply to hot spots, the government could avoid cutting any current allocations to states, he told The Post on Tuesday.

Arnold Monto, an epidemiologist at the University of Michigan and the chairman of the FDA's vaccine advisory committee, said the government may also need to adjust its formula to reflect waning demand for the shots in some parts of the country while others face continued scarcity.

"I'm not sure what the solution is, but clearly there are some problems with distribution," he said.

Information for this article was contributed by Andrew Selsky, Rachel La Corte, Andrew DeMillo, Jamie Stengle, Zeke Miller and Aritz Parra of The Associated Press; and by Isaac Stanley-Becker of The Washington Post 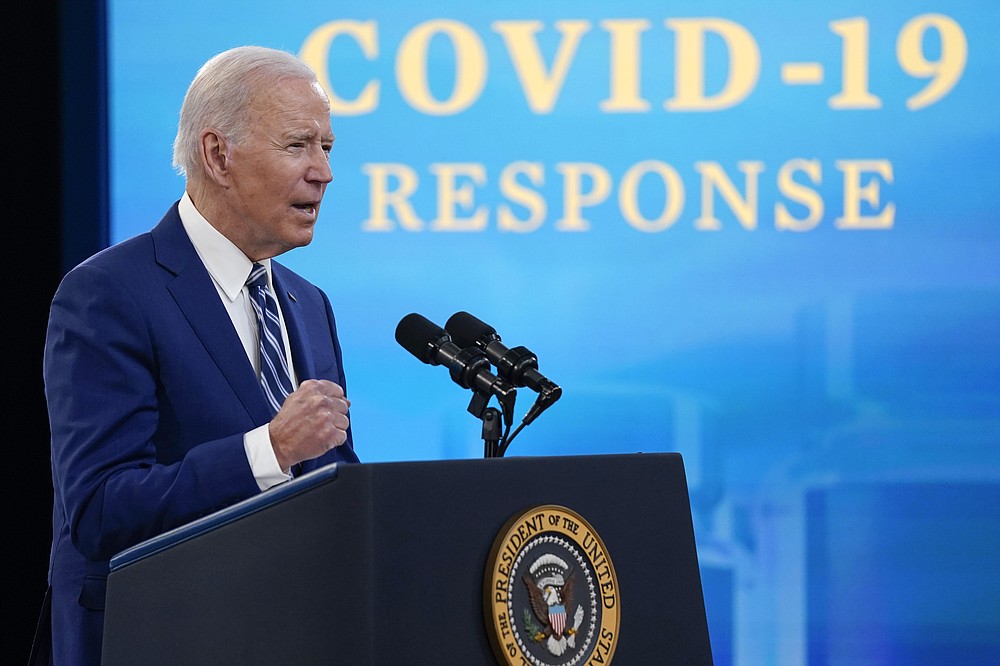 President Joe Biden speaks during an event on COVID-19 vaccinations and response, in the South Court Auditorium on the White House campus, Monday, March 29, 2021, in Washington. (AP Photo/Evan Vucci) 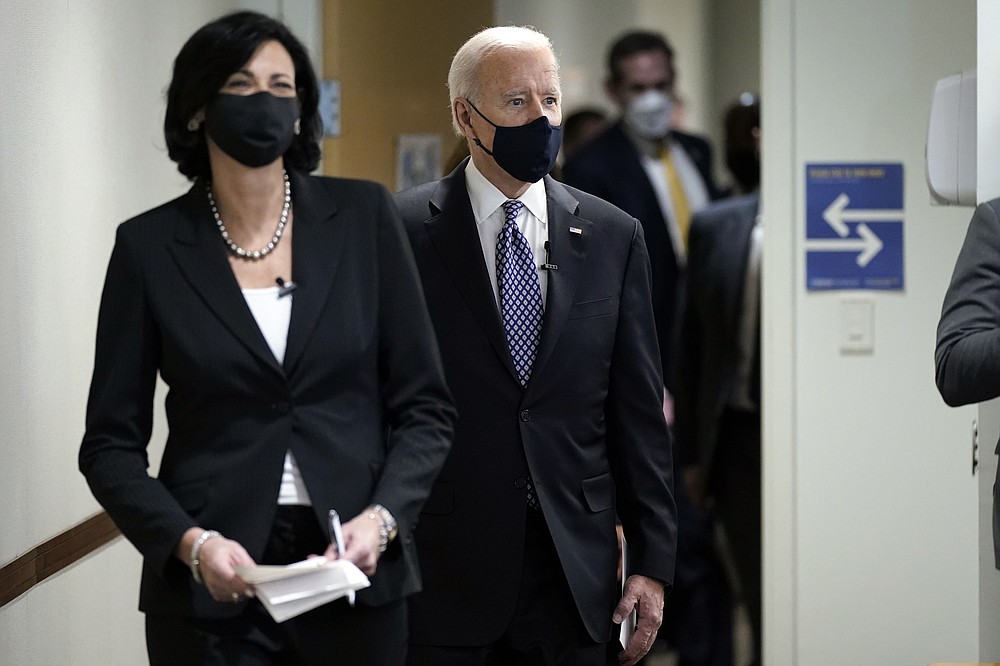 In this March 19, 2021, photo, Dr. Rochelle Walensky, director of the Centers for Disease Control and Prevention, leads President Joe Biden into the room for a COVID-19 briefing at the headquarters for the CDC Atlanta. Walensky is making an impassioned plea to Americans not to let their guard down in the fight against COVID-19. She warned on March 29 of a potential “fourth wave” of the virus. (AP Photo/Patrick Semansky) 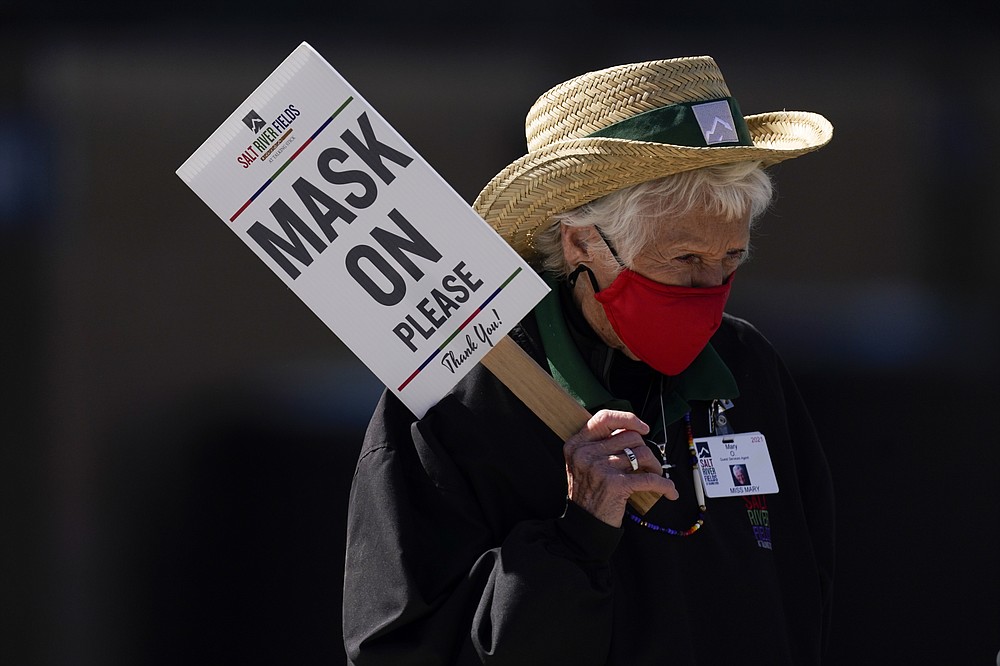 FILE - In this March 16, 2021, file photo, an usher holds a sign to remind fans to wear masks during a spring training baseball game between the Oakland Athletics and the Arizona Diamondbacks in Scottdale, Ariz. The Republican-controlled Arizona Senate voted Monday, March 29, to rescind its mandatory mask policy, and the House speaker made the same move on his own authority. (AP Photo/Ashley Landis, File) 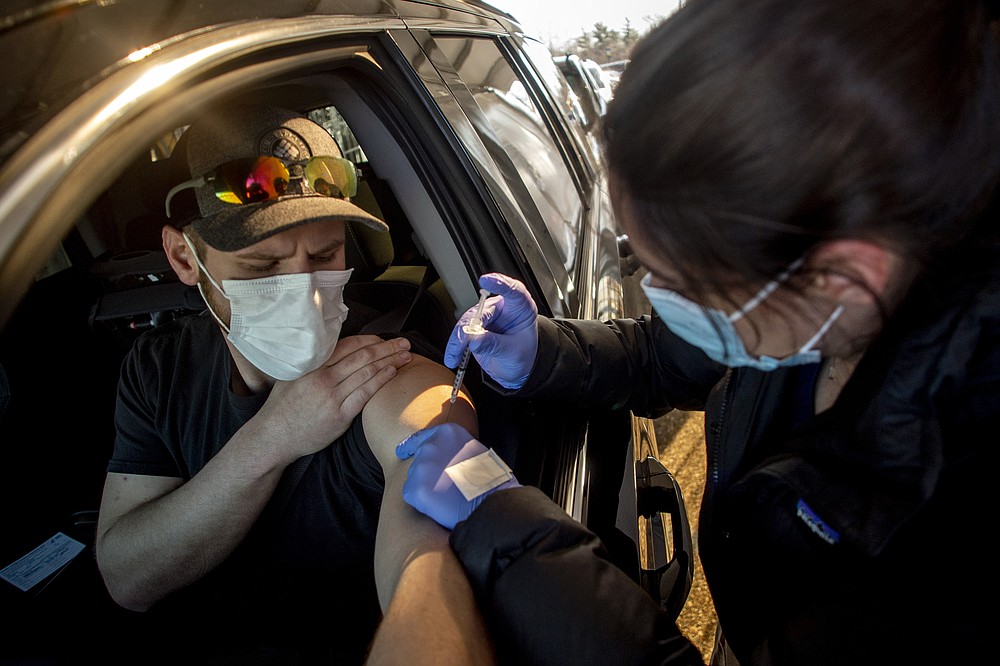 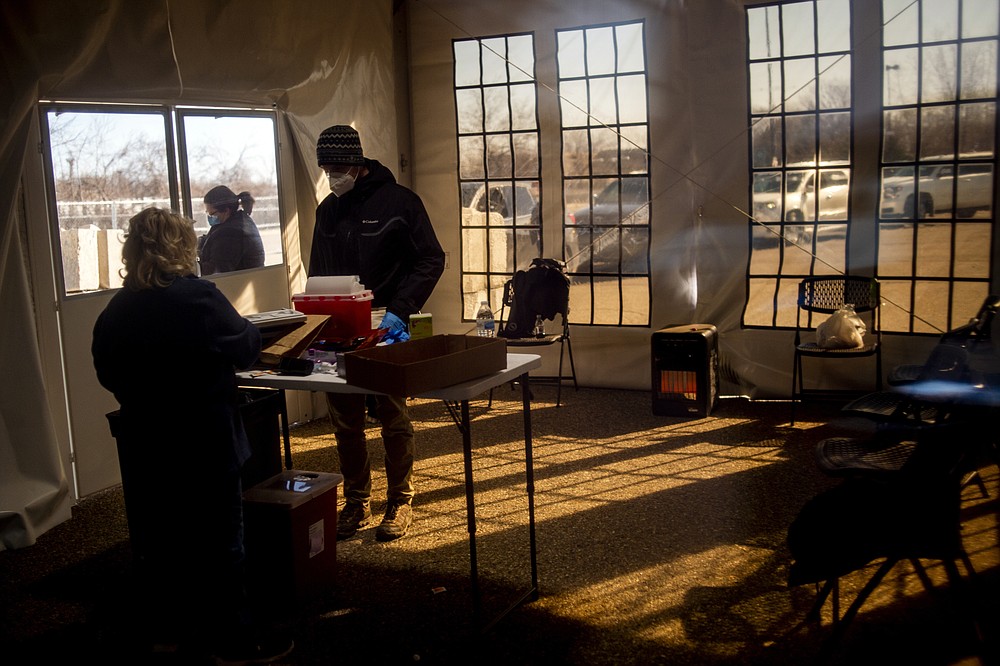 FILE - In this March 29, 2021, file photo, Joshua Severeide, a UM-Flint nursing student, prepares to give some of the hundreds of first doses of the Moderna COVID-19 vaccine to Genesee County residents at Bishop Airport in Flint, Mich. The Genesee County Health Department continues to facilitate the vaccination of local residents. (Jake May/The Flint Journal via AP, File) 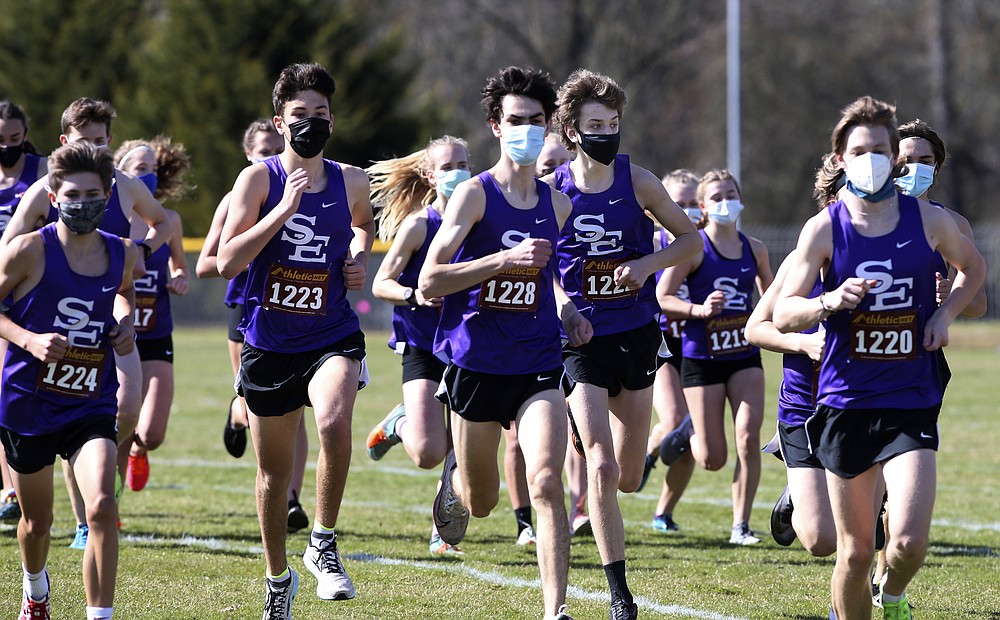 Runners from South Eugene join a cross-country meet at Marist High School in Eugene, Ore., on March 13, 2021. Oregon has one of the country’s strictest mask requirements. Even high school athletes must wear them while running races. (Chris Pietsch/The Register-Guard via AP)