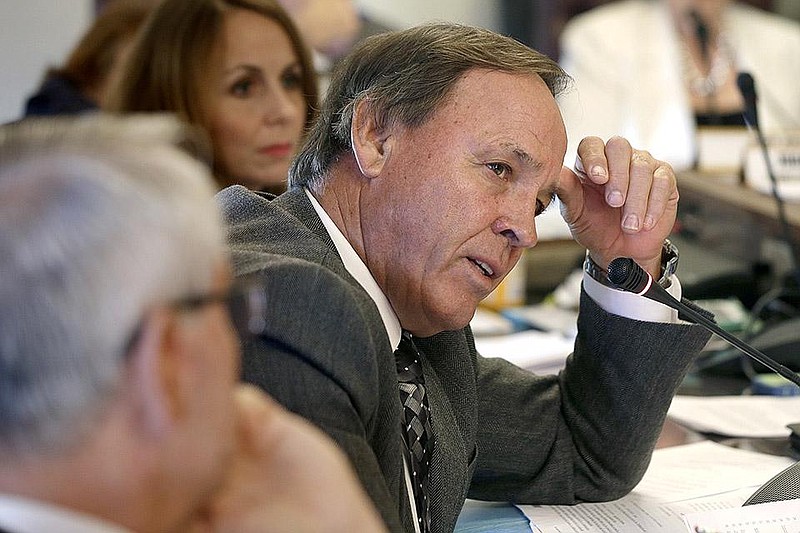 Sen. Gary Stubblefield, R-Branch, as a question during a meeting of the Senate Committee on Public Health, Welfare, and Labor at the Arkansas state Capitol in Little Rock, Ark., Wednesday, Jan. 28, 2015. (AP Photo/Danny Johnston)

The pair of bills -- Senate Bills 298 and 59 -- passed easily out of the Republican-dominated Senate Committee on City, County and Local Affairs, where several members expressed the belief that the federal government under President Joe Biden is planning to enact far-reaching gun control policies and confiscation.

Biden's administration has proposed some new restrictions on firearm ownership, such as requiring background checks for private gun sales, but he has not proposed large-scale confiscation of guns.

Asked about the bills on Tuesday, Gov. Asa Hutchinson said in a statement, "I will be reviewing the legislation in the coming days, but my first impression is that law enforcement will have significant constitutional concerns on those bills."

Later Tuesday, two additional companion bills to the Senate legislation -- House Bills 1386 and HB1435 -- were heard and rejected by the House Judiciary Committee.

The first of the bills advanced in the Senate, SB298, by Sen. Gary Stubblefield, R-Branch, is titled the "Arkansas Sovereignty Act of 2021." It would prohibit any law enforcement in the state from cooperating with federal authorities to enforce federal gun regulations or any other federal law that "infringes" on rights under the Arkansas Constitution. Police in the state would be subject to criminal penalties and fines for working with federal authorities in violation of the proposed state law.

The bill drew opposition from the Arkansas Sheriffs' Association, whose president said it would endanger law enforcement's relationship with the U.S. authorities.

"We depend on our federal partners to chase people down in other states," said Sheriffs' Association President Scott Bradley. "We do a lot of good work with them."

Federal laws that specifically would be declared null and void in Arkansas under SB298 include the National Firearms Act, which regulates machine guns and sawed-off shotguns, and the Gun Control Act of 1968, which regulates the interstate sales of firearms.

Stubblefield said the bill was needed because "for years the federal government has been deceiving people into believing there are limits on these rights."

The other bill, SB59, by Sen. Bob Ballinger, R-Ozark, would declare that certain firearms manufactured, sold and kept within the state of Arkansas would not be subject to federal regulation.

The measure would not apply to machine guns, black powder weapons or guns that need to be handled by at least two people.

Both bills passed the committee on a voice vote, and now head to the Senate floor.