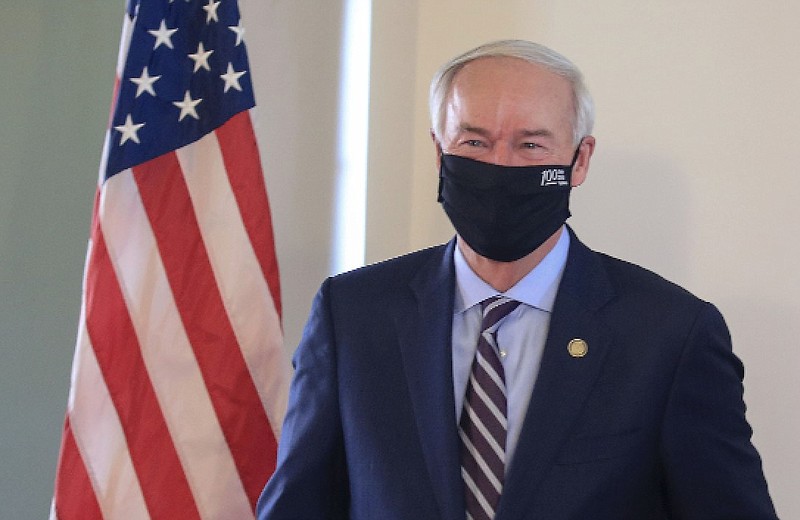 Gov. Asa Hutchinson wears a face mask to a press conference in Little Rock in this Nov. 12, 2020, file photo.

Gov. Asa Hutchinson on Tuesday lifted the statewide mask mandate and extended eligibility for coronavirus vaccines to all residents age 16 and older.

In an about-face from his comments a week earlier, Hutchinson also said cities can adopt ordinances requiring masks.

Businesses can also require masks on their premises, and the Republican governor encouraged Arkansans to follow those mandates.

"While we're lifting the statewide mask mandate, it does not mean that it ends in every venue, and people will make their own decisions in that regard, both business and individuals," Hutchinson said.

[Video not showing up above? Click here to watch » https://www.youtube.com/watch?v=w4NwWBZDl0U]

Schools can also set their own mask policies.

Hutchinson said he would continue to require state employees to wear masks at work when they can't maintain a safe distance from other people.

By the time his weekly news conference on the pandemic had wrapped up, however, the state Senate and House had both voted to lift mask requirements for lawmakers and legislative staffs.

Also on Tuesday, information released by the U.S. Centers for Disease Control and Prevention indicated that Arkansas' weekly allotment of the single-shot Johnson & Johnson vaccine is expected to more than double next week, to 43,500 doses.

The state will also get enough Moderna vaccine to provide initial doses to 30,200 people, up from 28,900 this week.

But its allocation of initial doses of the vaccine developed by Pfizer and BioNTech will fall from 49,140 this week to 39,780.

The developments came as the state's count of cases rose by 178.

That was larger increase than the one the day before but down by 61 from the number added the previous Tuesday, March 23.

After falling Monday, the number of people hospitalized in the state with covid-19 rose by six, to 170.

The state's death toll from the virus, as tracked by the state Department of Health, rose by 15, to 5,616.

Hutchinson said last month that he would lift the state's mask mandate today if, at that time, less than 10% of the state's coronavirus tests were positive over a rolling seven-day period and at least 7,500 tests were being conducted each day.

If fewer than 7,500 tests were being conducted a day, then the mandate would be lifted if fewer than 750 patients with covid-19 were in hospitals.

According to the Health Department, the percentage of the state's tests that have been positive over a rolling seven-day period has been below 10% since early February.

But because the average number of tests conducted each day has fallen below 7,500, it was the number of patients in the state's hospitals, which Hutchinson noted was "way below" the threshold he had set, that triggered the lifting of the mask mandate a day earlier than the governor had originally said it would expire.

Hutchinson last week said he would not allow cities to adopt their own requirements for people to wear masks in public places, then clarified that he was still considering the issue.

On Tuesday, he said he decided not to place a restriction on cities because he "would have to enter an executive order to do that."

Act 403, signed by Hutchinson earlier this month, requires such orders to be submitted to the Legislative Council for review.

Noting that last month he converted almost all Health Department directives aimed at slowing the spread of the virus to nonbinding guidance, Hutchinson said Tuesday that he wanted to move away from mandates and restrictions generally.

"Just like we lifted all the business restrictions, I'm lifting the restrictions in reference to local governments as well," Hutchinson said.

He added that he doesn't think many cities will want to adopt their own mandates.

"I think they like the direction we're going," he said.

The lifting of the mask mandate came just a day after President Joe Biden urged the leaders of state and local governments to keep such requirements in place.

Rochelle Walensky, director of the U.S. Centers for Disease Control and Prevention, also warned against lifting restrictions, noting that nationwide, new cases, hospitalizations and deaths from the virus have started to rise after falling for much of this year.

Hutchinson said Tuesday that he was acting against the warnings because "we made our decision in Arkansas based upon the criteria that we set."

"People in Arkansas know what needs to be done, and we expect them to do the right thing with their neighbors and with their businesses, and I think that's what Arkansas is about," Hutchinson said.

He noted that the Legislature on Monday approved his request to extend the state's public health emergency for another 60 days.

"That indicates that we know it's serious, and it sends a signal to everyone that while the mask mandate is lifted, let's still be careful and realize that the virus is still here," Hutchinson said.

He said Health Secretary Jose Romero set the criteria for lifting the mandate. It's possible it could be reimposed in response to a surge in cases, Hutchinson said.

"Anything is possible in the future, but I don't see that happening because we're getting the vaccine out, we're making progress on that every day, and the whole goal of the vaccination and the herd immunity is that we can lead a more normal life," Hutchinson said.

Romero said the nationwide uptick in new cases raises the importance of wearing a mask in public places, as well as of avoiding large gatherings.

"Just like we didn't see our first case for many weeks into the pandemic, these growing numbers of cases outside of the state will eventually get here if we are not careful," he said.

One concern that has been cited by public health officials is faster-spreading coronavirus variants.

Romero said seven cases of the variant that first emerged in the United Kingdom have been identified in Arkansas, "with the largest number" of those being discovered in the past week.

Officials have also found a total of 10 cases of two different kinds of variants from California. Those also have "increased transmissibility," but unlike the United Kingdom variant aren't more lethal than the more common type of the coronavirus.

Even without a statewide or local mask mandate, businesses can require customers to wear masks, John Wilkerson, general counsel for the Arkansas Municipal League, said.

If a customer refuses to put one on and won't leave, then the business can call the police. Ultimately, a noncompliant customer who refuses to leave can be arrested for trespassing, he said.

"Hopefully it would never get that far," Wilkerson said.

The Senate's temporary rules, approved on Jan. 11, the first day of the regular session, had required senators, staffers and members of the public in the Senate's facilities to wear masks or other cloth face coverings over their mouths and noses under most circumstances.

Afterward, Senate President Pro Tempore Jimmy Hickey, R-Texarkana, said he proposed lifting the mask requirement "to make it consistent with whenever the one for the public was up."

Asked whether he expects most senators to continue to wear masks, Hickey said: "I think a few will. I think some won't."

Asked whether he will wear a mask, he said, "Maybe a little of both."

He said he's been "fully vaccinated" against the virus.

The House took up a motion to do away with its mask rule shortly after the Senate's vote.

Rep. Carlton Wing, R-North Little Rock, told the House that the proposal to lift the rule was made in consultation with the Health Department and aligns with the governor's mandate going away.

At least 25 representatives were not wearing masks as they voted to end the rule. The motion carried in a split voice vote.

Wing said afterward that another motion would likely be made soon to do away with plexiglass barriers dividing the desks of each member, another safety precaution taken during this session.

House Minority Leader Tippi McCullough, D-Little Rock, said the rule going away was an expected move after the governor removed the state mandate, but she said vigilance was still needed.

"I think a lot of us will still wear the mask for a while just because of CDC, and once again, things that are going on, we just don't want to do things too early," McCullough said.

In contrast to the Legislature's votes, the state Board of Corrections decided in a meeting held via conference call Tuesday to continue requiring inmates, staffs and visitors at state prisons to wear masks, Department of Corrections spokeswoman Cindy Murphy said.

The Central Arkansas Veterans Healthcare System announced that it would continue requiring masks for anyone entering any of its facilities "per the Veterans Health Administration policy and CDC recommendations."

"If a Veteran, family member, or caregiver does not have a mask, one will be provided," the health system said in a news release.

According to a count by The New York Times, Arkansas joined at least 14 states, including Mississippi, Oklahoma, Texas and Louisiana, that have made the vaccines available to all adults.

Previously, eligibility in Arkansas had been restricted to people 65 and older, people with health conditions putting them at increased risk of severe covid-19, residents and workers at long-term care facilities, health care workers, people in certain essential jobs and other high-priority groups.

At The Pharmacy at Wellington in Little Rock, pharmacist Nick Dziurkowski said there was a "slight increase in phone calls" after Hutchinson's announcement, "but nothing overwhelming like in the previous" expansions of eligibility categories.

On its website, the pharmacy still had several appointment slots available as early as today for someone to receive an initial dose of the vaccine developed by Pfizer and BioNTech.

"I think most pharmacists think it's a good thing" that Hutchinson lifted the eligibility criteria, Dziurkowski said. "At this point, I think just about everyone who wants one should be able to get one."

The Northwest Arkansas Council, a business group, announced that it will hold weekly vaccination clinics in Washington and Benton counties starting this week.

Council spokesman Nate Green said 2,500 initial Pfizer doses will be available at each of the clinics, which will be held on Thursdays at the University of Arkansas' Donald W. Reynolds Razorback Stadium and Fridays at J.B. Hunt's headquarters in Lowell.

As of Tuesday afternoon, about 400 people had signed up for the first Washington County clinic, and 600 had registered for the one in Benton County.

He said the council plans to hold the clinics for at least the next 10 weeks.

According to the Health Department, providers participating in the vaccination effort coordinated by the state had received 1,736,160 doses as of Tuesday morning, up 81,710 from the total as of a day earlier.

The doses those providers reported having administered, including second shots of the Pfizer and Moderna vaccines' two-dose regimens, rose by 18,488, to 990,108.

In addition, Walmart, Walgreens, CVS and network pharmacies had been allotted 268,430 doses through federal programs, a number that hadn't changed since Friday.

According to the CDC, 772,457 Arkansans, or 25.6% of the state's population, had received at least one vaccine dose as of Tuesday.

Nationally, 28.9% of people had received at least one vaccine dose and 16.1% had been fully vaccinated.

Despite the increase in virus patients in the state's hospitals on Tuesday, the number of covid-19 patients who were on ventilators fell by three, to 25.

The cases that were added to the state's tallies on Tuesday included 103 that were confirmed through PCR tests.

The other 75 were "probable" cases, which include those identified through less-sensitive antigen tests.

The number of cases that were considered active fell by 56, to 1,717, as recoveries outpaced new cases.

Neither the Health Department nor Corrections Department reported any new cases in correctional institutions.

Among nursing home and assisted living facility residents, the state's count of virus deaths rose by three, to 2,063.

Information for this article was contributed by Michael R. Wickline, Rachel Herzog and John Moritz of the Arkansas Democrat-Gazette.