In some Arkansas cities, mask policies set to remain 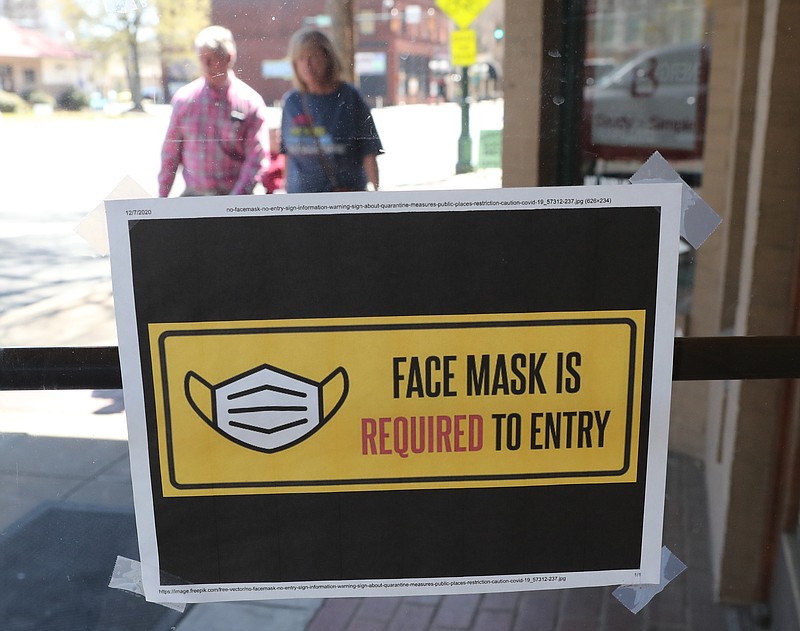 Pedestrians walk along the 600 block of Central Avenue near a sign on a business door requiring face masks for entry Monday. - Photo by Richard Rasmussen of The Sentinel-Record

Some of Arkansas' largest cities -- including Little Rock, North Little Rock, Fayetteville and Rogers -- aren't ready to be unmasked.

Gov. Asa Hutchinson announced Tuesday that he was lifting his statewide mask mandate, but some mayors say city ordinances and orders are still in effect to require facial coverings in certain places in an attempt to prevent the spread of covid-19.

Since July 20, masks have been required in public places in Arkansas when it wasn't possible to remain 6 feet from others, under Hutchinson's Executive Order 20-43. It listed some exceptions, such as young children and people with medical conditions.

On July 3, Hutchinson issued an executive order allowing cities to adopt their own mask ordinances, but some Arkansas cities had already done so.

"The cities have authority to make its own decision on whether to have a local mask requirement," Hutchinson said Tuesday. "There is no state prohibition on their action."

[LIST: These Arkansas cities and schools are keeping mask rules in place » arkansasonline.com/citymasks]

Scott addressed the issue of masks at the start of a Little Rock Board of Directors agenda meeting Tuesday afternoon after the governor's announcement.

In a follow-up statement issued on Twitter, Scott said the city would revisit the mask mandate every 30 days "to monitor data and recommendations from public health experts."

In June, Scott issued an executive order mandating face coverings in public places where social distancing was impossible. His action preceded the governor's issuance of the statewide mask order in July.

North Little Rock has its own mask ordinance. Mayor Terry Hartwick said he plans to keep the mask restrictions in place for a little while longer.

"I heard what the governor had to say, but right now we are on a roll and we want to keep it that way," he said. "I like where the numbers are right now, but I do think that we need to be a little cautious right now until we get the numbers back from spring break."

Hartwick said the city has been following the governor's lead for more than a year now, but he feels like caution is important.

"We just want to monitor the numbers for now," he said.

In Rogers, the city mask ordinance will stay in effect as long the the state is under a declared health emergency or until the ordinance is repealed by the City Council, according to a news release.

On Monday, the state Legislature granted Hutchinson a 60-day extension of his covid-19 public health emergency.

The emergency declaration allows local governments to keep emergency ordinances in place, according to the city of Rogers' news release.

"By the time Gov. Hutchinson's executive order expires, we believe those who will get vaccinated will have had the opportunity to do so," said Rogers Mayor Greg Hines. "Until then, we ask those in the city to continue to wear their masks."

Fayetteville sent out a news release Tuesday reminding residents that Ordinance 6323 is still in effect, "requiring face coverings in public places of accommodation."

Ordinance 6323 provides businesses with access to disposable masks at no cost.

Springdale doesn't have a mask ordinance, but Mayor Doug Sprouse said he wants the city to ease back into a bare-faced normal.

"It kind of puts us back where we were before the mandate went into effect," said Sprouse. "We were leaving it up to individual businesses and property owners whether they wanted to mandate masks or not. And we'll go back to that."

If customers don't comply, then they can be asked to leave, said Sprouse.

"They can call us as necessary, and we would treat it like a trespass if that's what the business wanted," said Sprouse. "I hope it doesn't go that far.

"As far as city buildings, we're going to gradually relax those requirements for folks. We're going to take a wait-and-see approach."

Sprouse said he'll get advice from his department heads. The staff at the Springdale Recreation Center will continue to wear masks for now, but people going there to exercise probably won't, Sprouse said.

"We're just going to ask people to be respectful of one another," he said. "We'll just lean on people to be good neighbors and use common sense."

Sprouse said people entering city buildings will still be required to wear masks and have their temperature checked for now. He said most city employees work in an environment where they can remain 6 feet from others.

That means people entering the Benton County Courthouse will no longer be required to wear masks.

"We're going to strongly encourage visitors to wear a mask, but we're not going to mandate that," said Moehring.

Circuit judges will set their own rules for their courtrooms, he said. County employees will be encouraged to wear masks it they can't remain 6 feet apart.

"There are still discussions going on about the procedures in the courtrooms," Day said in an email. "We are looking for guidance from the Health Department and [Administrative Office of the Courts] on this matter."

Bob Johnson, the mayor of Jacksonville, said the city will still ask people to wear masks inside buildings, but if the patrons say no, then the city will not enforce it.

"We will also quit taking temperatures after the mask mandate is lifted," he said. "We will record everyone who comes in for contact tracing purposes."

Johnson said he feels that lifting the mask mandate might be happening too soon.

"I think this can only lead to getting more people sick," he said. "I know people are tired of them, but let's get more people vaccinated. ... It's sooner than I like, but the numbers are going down and we are vaccinating more people, so I guess I don't see the harm."

County Judge David Hudson of Sebastian County said nothing will change there for now.

"I'm not doing anything at this point, changing anything, until we evaluate it further," he said.

Shari Cooper, a spokeswoman for Fort Smith, said the city will follow the governor's directives and guidance. She said Fort Smith didn't have its own mask ordinance but that people are encouraged to wear masks.

Cathy Hardin Harrison, the county judge in Miller County, said she plans to continue following the governor's guidance, too.

"Most of the restaurants and businesses are on the Texas side, and you don't have to wear a mask there already, so it's not really that big of a change for us," she said. "I'm actually glad he's doing away with it."

Texarkana, Ark., will lift restrictions at City Hall today for both staff members and the public in response to the governor's lifting of the mask mandate, said Kenneth Haskin, the city manager.

The city has been requiring everyone, staff and the public, in the building to wear masks. City Hall had previously been "closed to the public," according to the website. Haskin said the city had asked the public to call and make appointments to come in.

"Those were recommendations, and basically requirements, to protect not only the staff, but more importantly the public as well," he said.

In another border town on the other side of Arkansas, Kevin Smith, the mayor of Helena-West Helena, said he would like to see the city's mask ordinance remain in place.

"I think the worst thing we could do, honestly, is to lift these things prematurely and then see a second spike that sends us back to where we were a few months ago and dips our economy back down," said Smith.

Information for this article was contributed by Ashton Eley and Joseph Flaherty of the Arkansas Democrat-Gazette.