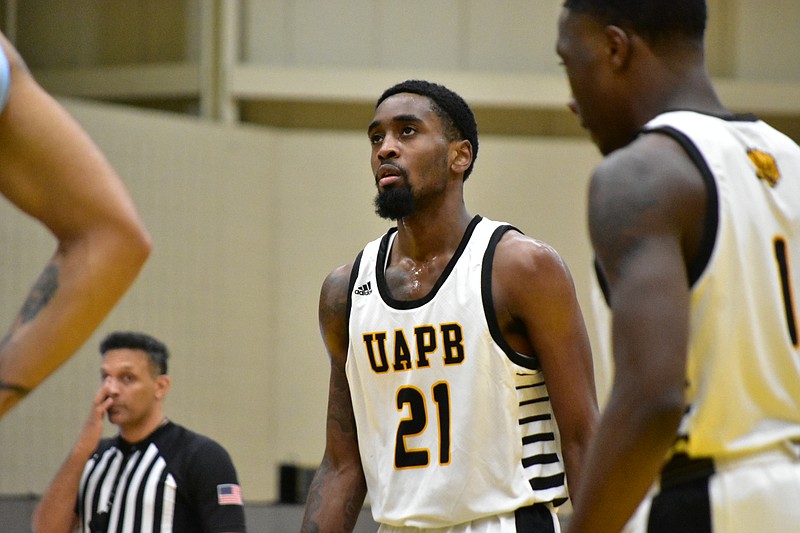 When the University of Arkansas at Pine Bluff men's basketball team begins the 2021-22 season, the Golden Lions will be without two valuable players from this season.

Leading scorer Shaun Doss Jr. and second-leading rebounder Markedric Bell have entered the NCAA transfer portal, which allows student-athletes to indicate their desire to transfer to another institution. UAPB Coach George Ivory said Tuesday that Doss and Bell will earn their bachelor's degrees, giving them the chance to transfer immediately to another school without having to sit out one season.

Their decision also comes ahead of expected NCAA Division I Council legislation that would allow all student-athletes to transfer one time without sitting out a year as a result of the coronavirus pandemic. The change reportedly will be considered at the council's meeting following this weekend's Final Four and, if passed, is expected to be in effect for only 2021-22.

Even if an athlete is a senior, as is the case with Bell, he or she can return for another season as another covid-19 courtesy.

Doss and Bell are joining a larger-than-usual pool of prospective transfers in the portal, Ivory said.

"That's the thing going on," he said. "You have 1,000 guys in the portal, and that's just Division I basketball. We've got some guys committed that will come in. We've got to keep moving. They made a choice. They're both graduating. We hate to lose them, but we congratulate them."

Ivory, the Lions' head coach since the 2008-09 season, said he's never seen that many Division I basketball players in the portal at one time.

Doss, a 6-foot-5 redshirt junior from Marion, won back-to-back Southwestern Athletic Conference Player of the Week awards in January and averaged team highs of 15.9 points and 6.5 rebounds for the Lions, who finished 4-21 overall and 3-13 in the SWAC.

He was given a medical redshirt following an injury in the third game of the 2019-20 season, which was his second at UAPB and third collegiately (he played as a freshman at Iowa Western Community College) after averaging 12.9 points and 4.2 rebounds as a sophomore.

Bell, a 6-foot-8 forward from Starkville, Miss., averaged 7.9 points, 1.6 blocks and 5.2 rebounds, starting all 25 games along with Doss this past season. He was the team leader in scoring last season at 10.8 points per game, having just transferred from East Mississippi Community College.

Ivory said he and his coaching staff recruited in a way to replace the seniors who may leave. Forward Terrance Banyard, as well as guards DeQuan Morris and Nicholas Jones, are also seniors but have not indicated whether they will return for a bonus season, Ivory said.

Morris is from Pine Bluff and transferred to UAPB from Coahoma Community College in Mississippi.

"At the end of the day, it's all about getting the degree, and that's something they accomplished," Ivory said of the transferring players.

The Lions stumbled through a second straight four-win season with a roster loaded with junior-college transfers. Despite a 2-0 SWAC start with victories over Alabama State and Mississippi Valley State, they lost their next 12 games, including seven by double digits, two in overtime and two by three or fewer points in regulation.

"Leadership wasn't the way it could have been. We lost a little confidence," Ivory said. "We lost a lot of games right there, eight or nine points. I thought experience kind of hurt us."

"I thought Texas Southern had the most talent in the league," he said. "It showed in the end because you have five or six transfers on that roster. This [transfer portal] will be a big thing right now."

Despite having eight junior college transfers, Ivory cited the lack of offseason workouts due to covid-19 as a reason for the Lions' struggles.

Ivory added he is not opposed to finding other mid-major opponents in future seasons as a way to bring more home games to UAPB if the budget allows. The program regularly loads its nonconference slate with visits to major-college teams such as Baylor, which defeated the University of Arkansas on Monday night to advance to the Final Four and beat UAPB 99-42 on Dec. 21. Such contests for UAPB are considered "money games" because the bigger-name opponents pay limited-resource programs like the Lions to visit them.

"We've been in communication about in-state schools about home games, and I think that would help with the interest of basketball," Ivory said. He added he would probably give Arkansas a call about a game.