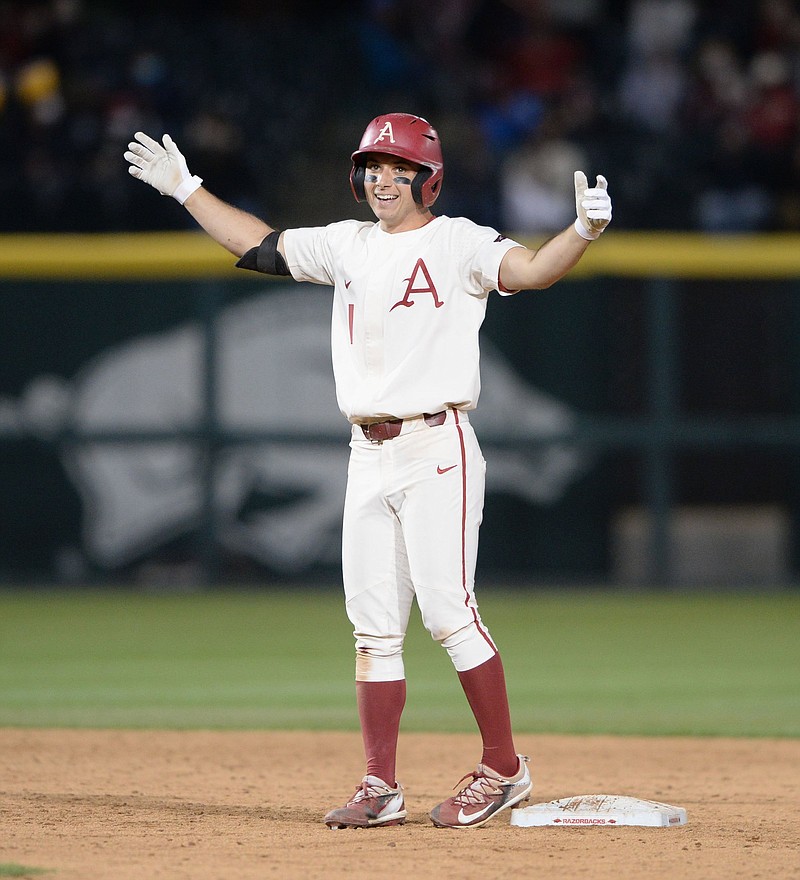 Moore hit for the cycle in the first six innings and drove in six runs to lead the No. 2 Razorbacks to a 21-8 win over the University of Central Arkansas in a slugfest before a crowd of 5,735 at Baum-Walker Stadium.

The hammering Hogs (20-3) hit five home runs to take the NCAA lead en route to their eighth consecutive win. It also was the first meeting between the teams since 1948.

Arkansas put together seven-run innings in the fourth and sixth while posting its highest run total since a 32-4 rout of Bucknell on Feb. 17, 2018.

UCA (9-12) had a big offensive night but ran into a shortage of arms while finishing up a 10-game road swing in the middle outing of nine games in nine days.

Arkansas shortstop Jalen Battles hit home runs in the third and fourth innings, while Moore, Charlie Welch and Dylan Leach contributed home runs to push the team total to 45, one more than LSU.

"Offensively, they just did a tremendous job," Arkansas Coach Dave Van Horn said. "We swung the bats really well and hit the ball hard and put together a couple of really big innings. It felt like we were in control of the game really from about the fourth inning on. Early, it got a little dicey."

Moore, whose recent struggles had dropped him down to eighth and ninth in the batting order, reached base in all six plate appearances on the day before his 19th birthday. The sophomore added a first-inning walk and a seventh-inning hit by pitch to his 4-for-4 night. He launched a go-ahead two-run triple in the second, a single in the fourth and a solo home run in the fifth inning. Moore came to the plate in the sixth needing a double for the cycle, and he cranked a shot deep to right field off Trent Gregson for an RBI double.

"I got a pitch I could hit with two strikes," Moore said. "I didn't pick up Coach [Nate Thompson] to go to third, as I probably should have, but I crept into second and it was probably one of the coolest experiences playing this game."

Moore became the first Razorback to hit for the cycle since Kyle Harris in 1994 against Tennessee. The home fans gave him an ovation after the double, and Moore waved to the crowd with a huge grin on his face.

"Not only did he hit for the cycle, but I like it that he drove in six runs," Van Horn said. "Those RBIs, that means you're scoring. There's been probably a lot of cycles that have been a lot less exciting than his because he was really helping the team win."

Matt Goodheart and Battles, who drove in four runs, had three hits each for the Razorbacks.

UCA designated hitter A.J. Mendolia went 4 for 4 and added a sacrifice fly for one of his three RBI. Benny Ayala and Kolby Johnson, who had a bases-clearing double in a four-run fifth, had two hits apiece for the Bears.

The win went to Arkansas starter Kole Ramage (1-1), who allowed 3 runs on 5 hits and a walk in 4 innings.

The Bears jumped on top in the early innings and kept things interesting in their traditional style with situational hitting, moving runners and delivering some clutch two-out hits.

The run-scoring action started early, as UCA right fielder Connor Emmet took Ramage's second pitch the opposite way and off the top of the left-field fence for a home run.

Arkansas got the run back in the first but burned an opportunity for a big inning after freshman Tate Busey walked the first three batters. Brady Slavens greeted Janak with a sacrifice fly to score Moore, but Janak induced a ground ball double play from Christian Franklin to escape the inning.

The Bears went back on top in the second inning with crafty small ball after Mendolia's leadoff single. Drew Sturgeon, a former Farmington standout, bunted hard back to Ramage, who slipped onto his rear. His looping throw to first short-hopped Goodheart and moved him toward the base path, and he could not field the ball cleanly.

Johnson's bunt moved the runners to second and third, and Connor Flagg's ground ball to second brought Mendolia home for a 2-1 lead.

Arkansas struck for a pair in the second inning on Zack Gregory's two-out single, Leach's double into the left-field corner and Moore's shot off the wall in left-center for a two-run triple.

UCA scratched back into a tie in the third after Emmet's leadoff walk. With two outs, Moore misplayed Ayala's high pop in short right field into a single. Mendolia made Ramage pay with a smash up the middle to bring home Emmet.

Welch, the designated hitter, untied it in the bottom of the inning with a solo shot, his second, deep to left field for a 4-3 Arkansas lead.

Franklin walked and Battles sent a shot over the left-field wall later in the inning to make it 6-3 before Arkansas began pulling away with its seven-run fourth inning.

NO. 2 ARKANSAS VS. AUBURN

UCA outfielder Connor Emert’s leadoff home run was the Bears’ ninth of the season. … Arkansas starter Kole Ramage has allowed a team-high four HRs, including one in each of his last three appearances. … Christian Franklin’s 5-4-3 double play in the first inning was just the second GIDP of the season for the Hogs. … Arkansas DH Charlie Welch, who made his third start, has six hits and two of them are home runs. … UCA CF Drew Sturgeon, a former Farmington standout, made a leaping catch at the wall just in front of the 400-feet sign to rob Zack Gregory in the seventh inning. … Arkansas C Dylan Leach, making his fifth start, hit his first career home run in the seven-run fourth.