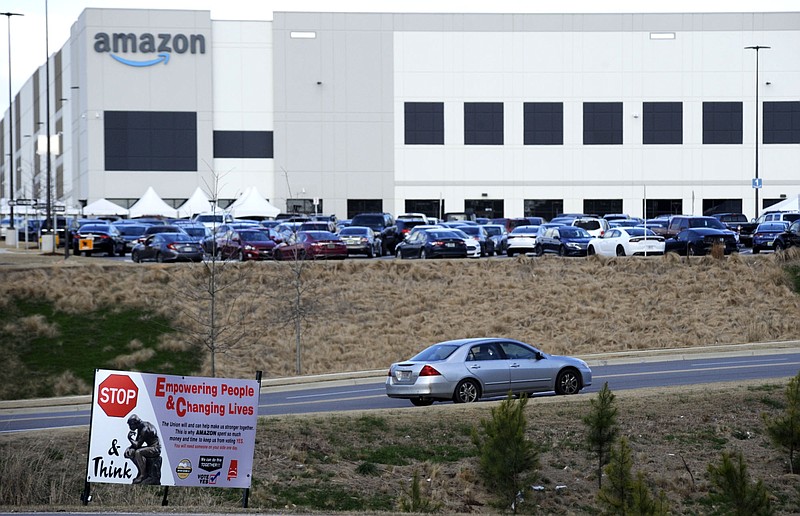 FILE- This Feb. 9, 2021 photo file photo, a car enters an Amazon facility where labor is trying to organize workers in Bessemer, Ala. Organizers are pushing for some 6,000 Amazon workers to join the Retail, Wholesale and Department Store Union on the promise it will lead to better working conditions, better pay and more respect. Amazon is pushing back, arguing that it already offers more than twice the minimum wage in Alabama and workers get such benefits as health care, vision and dental insurance without paying union dues. (AP Photo/Jay Reeves, File)

Vote counting began Tuesday in a ballot that will determine whether a union can form at an Amazon warehouse in Bessemer, Ala.

The results of the election may not be known until later this week or early next week because the vote can often involve a painstaking process that will be closely scrutinized by representatives from the union and Amazon.

The ballots, which were mailed out to workers in early February, must be signed and had to be received by the National Labor Relations Board at its Birmingham office by the end of Monday.

Whatever happens could have major implications not just for the country's second-largest employer but the labor movement at large.

Organizers are pushing for some 6,000 Amazon workers there to join the Retail, Wholesale and Department Store Union on the promise it will lead to better working conditions, better pay and more respect.

Amazon is pushing back, arguing that it already offers more than twice the minimum wage in Alabama and workers get such benefits as health care, vision and dental insurance without paying union dues.

The two sides are fully aware that it's not just the Bessemer warehouse on the line. Organizers hope what happens there will inspire thousands of workers nationwide -- and not just at Amazon -- to consider unionizing and revive a labor movement that has been waning for decades.

"This is lighting a fuse, which I believe is going to spark an explosion of union organizing across the country, regardless of the results," says union President Stuart Appelbaum.

The union push could spread to other parts of Amazon and threaten the company's profits, which soared 84% last year to $21 billion. At a time when many companies were cutting jobs, Amazon was one of the few still hiring, bringing on board 500,000 people last year to keep up with a surge of online orders as the pandemic kept people out of stores.

Either side can contest whether the vote was conducted fairly. The union, for instance, could argue that the company took steps to improperly sway the vote, by potentially making workers fearful of reprisal if they supported organizing.

If the union prevails, workers fear that the company may shut down the warehouse. Amazon has backed away from locations that brought it headaches before.

For Amazon, which employs more than 950,000 full- and part-time workers in the U.S. and nearly 1.3 million worldwide, a union could lead to higher wages that would eat into its profits. Higher wages would also mean higher costs to get packages to shoppers' doorsteps, which may prompt Amazon to raise prices, says Erik Gordon, a professor at the University of Michigan's Ross School of Business.

In a statement, Amazon says it encouraged all its employees to vote and that "their voices will be heard in the days ahead."

Any push to unionize is considered a long shot, since labor laws tend to favor employers. Alabama itself is a "right-to-work" state, which allows workers in unionized shops to opt out of paying union dues even as they retain the benefits and job protection negotiated by the union.

Kent Wong, the director of the UCLA Labor Center, says companies in the past have closed stores, warehouses or plants after workers have voted to unionize.

"There's a history of companies going to great lengths to avoid recognizing the union," he says.

The only other time Amazon came up against a union vote was in 2014, when the majority of the 30 workers at a Delaware warehouse turned it down.

This time around, Amazon has been hanging anti-union signs throughout the Bessemer warehouse, including inside bathroom stalls, and holding mandatory meetings to convince workers that the union is a bad idea, according to one worker who recently testified at a Senate hearing. It has also created a website for employees that tells them they'll have to pay $500 in union dues a month, taking away money that could go to dinners and school supplies.

Amazon's tactics extend beyond squashing union efforts. Last year, it fired a worker who organized a walkout at a New York warehouse to demand greater protection against coronavirus, saying the employee himself flouted distancing rules. When Seattle, the home of its headquarters, passed a new tax on big companies in 2018, Amazon protested by stopping construction of a new high-rise building in the city; the tax was repealed four weeks later. And in 2019, Amazon ditched plans to build a $2.5 billion headquarters for 25,000 workers in New York after pushback from progressive politicians and unions.

Beyond Amazon is an anti-union culture that dominates the South. And unions have lost ground nationally for decades since their peak in the decades following World War II. In 1970, almost a third of the U.S. workforce belonged to a union. In 2020, that figure was 10.8%, according to the U.S. Bureau of Labor Statistics. Private sector workers now account for less than half of the 14.3 million union members across the country.

Advocates say a victory would signal a shift in the narrative about unions, helping refute the typical arguments from companies, including Amazon, that workers can win adequate compensation and conditions by dealing with management directly.

Information for this article was contributed by Joseph Pisani and Bill Barrow of The Associated Press and by Karen Weise and Michael Corkery of The New York Times.