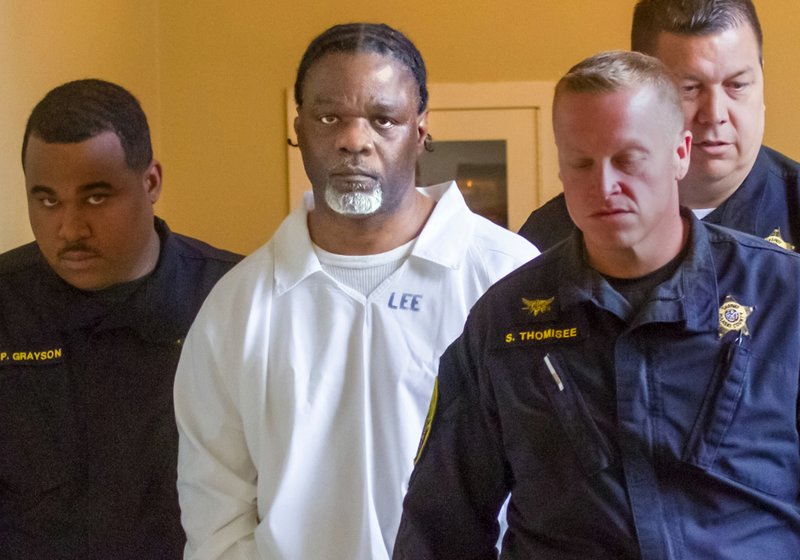 In this April 18, 2017, file photo, Ledell Lee appears in Pulaski County Circuit Court for a hearing in which lawyers argued to stop his execution.

Four years after the execution of an inmate convicted of killing his Jacksonville neighbor in 1993, new DNA evidence has emerged revealing genetic material and fingerprints from an unknown man, according to a report released Friday by the Innocence Project and the American Civil Liberties Union.

Ledell Lee maintained his innocence from the time of his arrest until he was executed on April 20, 2017, for killing Debra Reese. He was the first of four men to be executed by the state over an eight-day period in 2017. His was the first execution since 2005.

DNA testing of evidence from the crime scene, including the murder weapon and a bloody shirt, revealed the profile of an unknown man. Fingerprints found on crime scene evidence also could not be identified, according to the Innocence Project and the ACLU.

It is unclear whether the DNA profile and the fingerprints are connected.

The DNA and fingerprint profiles have been entered into national databases but so far no matches have been identified.

"While the results obtained 29 years after the evidence was collected proved to be incomplete and partial, it is notable that there are now new DNA profiles that were not available during the trial and post-conviction proceedings in Mr. Lee's case," Nina Morrison, Innocence Project senior litigation counsel, said in a statement.

"We are hopeful that one or more of these forensic law enforcement databases will generate additional information in the future," Morrison said.

The DNA profile will remain in the national database and will automatically be compared to all new profiles from convicted persons, arrestees or unsolved crimes entered in the future.

At the time of the investigation, there was no national DNA database, according to the Innocence Project.

The Arkansas Civil Liberties Union, the Innocence Project and other criminal-justice advocacy groups filed a lawsuit in January 2020 on behalf of Patricia Young, the sister of Lee. The suit sought to obtain unused evidence that has remained in the possession of the Jacksonville Police Department, the agency that investigated the 1993 slaying.

Lee family attorneys and Jacksonville received two DNA testing reports this week from the evidence submitted for additional screening, according to a news release from the Innocence Project, a New York nonprofit that works to exonerate wrongfully convicted people.

"This is a difficult time of year as we mourn the death of our brother, who we loved deeply," Young, Lee's sister, said in a statement. "We are glad there is new evidence in the national DNA database and remain hopeful that there will be further information uncovered in time."

Lee's first trial in Reese's slaying ended with a hung jury. He was later convicted and sentenced to death in his second trial. Lee had been convicted of rape in two unrelated cases.

During the trial, prosecutors relied on eyewitness testimony from Reese's neighbors, who said they saw Lee walking around the neighborhood the morning she was killed. Lee was never linked to the crime through DNA analysis.

The January 2020 court documents filed on behalf of Lee's sister said "no physical evidence directly tied" Lee to the death of Reese, who was killed in her home during a robbery, according to trial testimony.

"Instead, the state convicted Mr. Lee by vastly overstating the nature and significance of the limited forensic testing conducted at that time, including tests that its own experts admitted were ultimately 'inconclusive,'" the court documents said.

"Ledell Lee was convicted by an Arkansas jury," Gov. Asa Hutchinson said in a statement in response to the release of the new DNA evidence. "Prior to his execution, he exhausted his right of appeal up to the Arkansas Supreme Court and the United States Supreme Court."

"The DNA findings released today do not present any conclusive evidence to undermine the findings of those high courts," the governor said.

Among the new findings was "DNA from an unknown male" on the handle of the murder weapon, "a bloody wooden billy club recovered from the victim's bedroom," the Innocence Project said.

Genetic material from an "unknown male" also was found "in a DNA mixture on a bloody white shirt wrapped around the murder weapon," the report said.

"The male DNA on both the club and the bloody fabric appears to be the same on both items," the Innocence Project reported.

Five fingerprints from the crime scene, which investigators determined did not come from Lee, also were searched in the national fingerprint database, resulting in no positive identification.

In an emailed statement, Attorney General Leslie Rutledge said: "The courts consistently rejected Ledell Lee's frivolous claims because the evidence demonstrated beyond any shadow of a doubt that he murdered Debra Reese by beating her to death inside her home with a tire thumper."

"After 20 years, I am prayerful that Debra's family has had closure following his lawful execution in 2017," the attorney general said.

The Arkansas Department of Corrections currently has 30 inmates on death row.