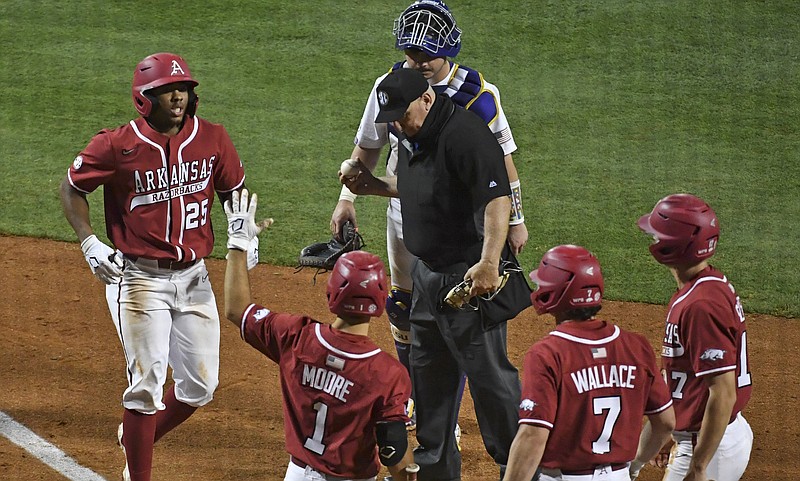 Arkansas center fielder Christian Franklin (left) is congratulated by teammates after hitting a three-run home run in the eighth inning that extended the Razorbacks’ lead to 7-0 against LSU on Friday night in Baton Rouge. Franklin finished 2 for 4 with 5 RBI. (The Advocate/Hillary Scheinuk)

For six innings the No. 1 Arkansas Razorbacks and LSU were locked in a scoreless pitching duel.

Then the Razorbacks -- center fielder Christian Franklin in particular -- broke out on offense and the University of Arkansas beat the Tigers 7-0 at Alex Box Stadium in Baton Rouge.

Franklin drove in five runs, including a three-run home run in the eighth inning when the Razorbacks (33-7, 14-5 SEC) scored five times. He also had a two-run single in the seventh inning that gave Arkansas a 2-0 lead.

The single came on Franklin's third at-bat against LSU starter Landon Marceaux (4-4), who had a no-hitter through six innings.

"He was doing a good job of keeping our lineup down," Franklin said. "Mixing well. Had the off-speed working.

"My first at-bat he had thrown a couple off-speed and one fastball. Next at-bat, more fastballs. So in that situation with runners in scoring position, I knew he was probably going to throw more off-speed, not just throw me a straight fastball. Maybe give me something outside of my zone, so I was really just looking for something up.

"Then with two strikes he was in the zone a majority of the game to me. I knew he was going to be in the zone. He hung a curveball, and I was able to hit it for a single."

Franklin's home run came against LSU reliever Michael Fowler, and he hit a 3-1 fastball over the left-field fence.

"A good job working the count to 3-1," Arkansas Coach Dave Van Horn said. "He got a him a fastball and he hammered it. He hit the bottom half of it. He hit it really high.

"On a normal day, that ball goes way out of here, but the wind got ahold of it a little bit and kept it from going probably another 30, 40 feet."

Arkansas starter Patrick Wicklander (3-1) went 6 2/3 innings and held the Tigers to three hits, then Kevin Kopps retired all seven batters he faced to earn his sixth save.

"Patrick Wicklander was outstanding, very efficient," Van Horn said. "Just attacked them. They like to swing, and they swung. A lot of fly balls, ground balls, and [five] strikeouts mixed in and some quick innings.

"It was just a great job getting us to Kevin Kopps. Then Kevin obviously shut the door."

Arkansas shut out LSU for the third time -- all under Van Horn -- in 119 meetings going back to 1960 and for the first time since the Razorbacks won 2-0 at Fayetteville in 2011 in the opener of a three-game series they swept. The other shutout victory for Arkansas over the Tigers was a 5-0 victory at Fayetteville in 2007.

"Obviously bottom line we just want to win the game whatever the score is," Van Horn said. "But it's nice to get a shutout every now and then."

It was the fourth shutout for Arkansas this season along with beating Texas 4-0, Murray State 6-0 and Texas A&M 13-0.

"[Wicklander] challenged us with the fastball, and that's something we didn't handle very well," LSU left fielder Gavin Dugas said. "He did a good job of throwing the breaking ball. Hats off to him. He threw a great game."

Wicklander threw his fastball 80% of the time, Van Horn said, and he had 53 strikes on 67 pitches without a walk.

"We just couldn't solve Wicklander," Tigers Coach Paul Mainieri said. "He's a good left-hander, we didn't have a lot of great swings against him. We hit a couple of balls hard, but not a lot. I thought we'd do a bit better, but we just couldn't get to him."

The Razorbacks finally got to Marceaux in the seventh inning.

"I started getting behind in counts, something I didn't do for the first six innings," Marceaux said. "It wasn't even competitive through the first six. They were up, and they were down.

"He's a great pitcher and a great person," Marceaux said. "He matched me pitch for pitch and then they turned it over to one of the best pitchers in the country."

In Kopps' last three games -- including two at South Carolina last weekend -- he has retired all 22 batters he faced with 17 strikeouts.

"He's just on a roll," Van Horn said. "He's pitching great. I've seen teams take pitches on him. I've seen them swing early trying to get him before he gets ahead and it hasn't worked yet."

In the eighth inning, Slavens, who was 2 for 4, had a two-run single before Franklin's home run broke the game open.

"I don't think the score was any way indicative of the kind of game that it was," Mainieri said. "It was a great ballgame. We were on the short end of it."

LSU threatened in the seventh inning when Dugas singled with one out and Cade Doughty followed with a single, but Franklin threw out Dugas trying to go to third base.

"We're sitting on a two-run lead, we're thinking [Franklin] should probably just throw the ball to second base," Van Horn said. "But he charged it hard, made a perfect throw. Obviously it changed the whole inning."

Kopps came in and struck out Giovanni DiGiacomo, then didn't allow a base runner the rest of the game.

"It's been nice to know when he's coming in that he's going to get the job done in any situation," Franklin said of Kopps' dominance as a closer. "I was saying it all fall he was the one person I hated to face.

"He's made such good strides and I'm so happy for him and all the success that's coming his way."

The Razorbacks and Tigers will play a doubleheader today -- at 2 p.m. and 6:30 p.m. -- because of rain and thunderstorms forecast for Sunday.

It will be the fourth consecutive weekend Arkansas has played a doubleheader. The Razorbacks split at Ole Miss, swept Texas A&M at home and split at South Carolina.

Right-hander Peyton Pallette (1-2, 3.98 ERA) will go for Arkansas in today's opener against LSU right-hander AJ Labas (3-0, 3.15). Neither team has announced a starter for the nightcap.

"Whenever you experience something, you know kind of what to expect," Van Horn said. "When you play a doubleheader, you can't think about the whole day. You just have to try to handle what's in front of you and when the game's over, you move on to the next one."

SHORT HOPS LSU is allowed to have full capacity at Alex Box Stadium starting with Friday night’s game, but the announced crowd was 6,331. The stadium’s capacity is 10,326 … Arkansas improved to 10-3 on the road this season, including 8-2 in SEC games … LSU is 19-11 at home and 2-8 in SEC play … If the Razorbacks win at least one game today, they’ll win only their second series at LSU since joining the SEC in 1992. Arkansas’ only series win on the road against the Tigers was in 2004 when the Razorbacks swept three games … Christian Franklin’s home run Friday night was his 10th this season to tie Robert Moore and Brady Slavens for second among the Razorbacks behind Matt Goodheart’s 11 … Slavens’ 2 RBI Friday night raised his total to 49 … Arkansas has hit a national-leading 75 home runs.