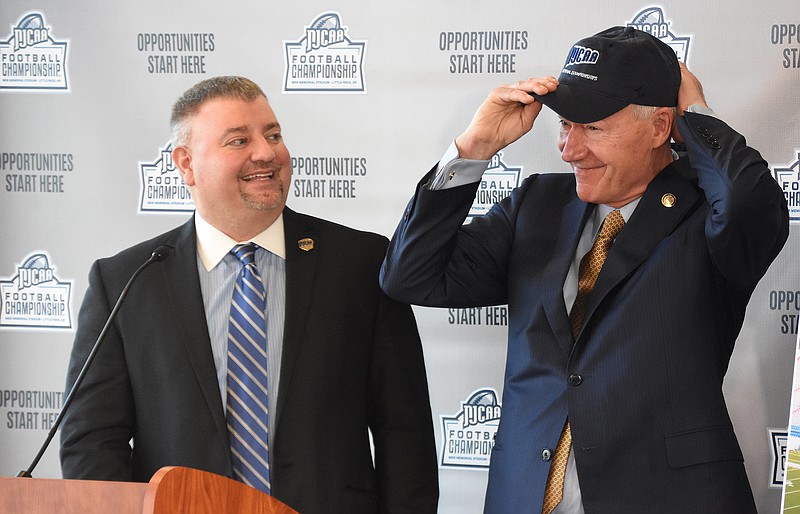 Not one, but two national championships are coming to Little Rock in 2021.

War Memorial Stadium also will host the 2021 championship in December when the the NJCAA returns to its traditional fall schedule, and again in 2022 and 2023. The June 5 game will be televised on CBS Sports Network.

"This historic site is a perfect fit for the junior college national football championships," Hutchinson said.

Little Rock was chosen from as many as 12 prospective host cities. Parker cited the city's central location nationally, amenities offered by its downtown and the appeal of War Memorial Stadium that set Little Rock apart in becoming the next home of the the junior college championship game.

The NJCAA last held the event in Pittsburg, Kan., in 2019, which was traditionally the site of the higher-seeded finalist. In Little Rock, the NJCAA now has a neutral home for its national title game through 2023.

"We want to make Little Rock the destination teams have their eyes on in August when they get on the field and the one they want to be at in December," Parker said.

The Little Rock Convention & Visitors Bureau and Arkansas Department of Parks, Heritage and Tourism partnered in the bid to host the championship, a process that began 10 months ago. When Little Rock was included as a finalist, NJCAA officials traveled to tour the city and the stadium and came away encouraged by the experience the capital city could offer visiting teams and fans.

The city could not provide projected economic impact figures for hosting the event and anticipates lower attendance for the June title game relative to future winter championship games, due to covid-19. Little Rock Convention and Visitors Bureau President Gretchen Hall and Department Parks, Heritage and Tourism Director Stacy Hurst both expect the arrival of a national championship to Little Rock will provide a boost to local businesses impacted during the pandemic.

"It will help with our hotels, our restaurants, our attractions as these teams come in for multiple days and hold multiple events within the community," Hall said. "There will be a financial impact and it will also increase some awareness for the city from the national television opportunity."

The title game is played between the top-two programs from the NCJAA's national rankings. Currently, No. 1 Hutchinson (Kans.) Community College and No. 2 Kilgore (Texas) College are at the top of the rankings.