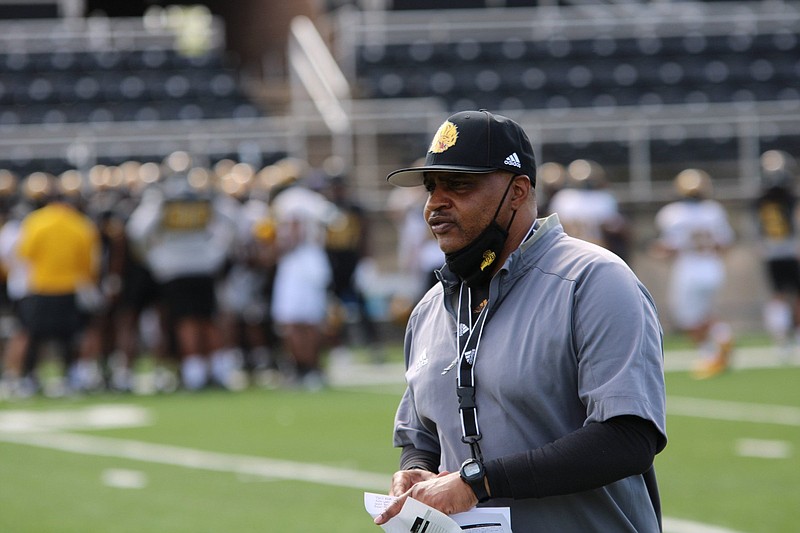 Doc Gamble will close out his first season — albeit one delayed and shortened by the coronavirus pandemic — as Arkansas-Pine Bluff’s coach in the Southwestern Athletic Conference Championship Game against Alabama A&M today in Jackson, Miss. (Pine Bluff Commercial/I.C. Murrell)

JACKSON, Miss. — University of Arkansas at Pine Bluff Coach Doc Gamble isn’t big on his team playing the role of a one-hit wonder. So when the Ohio native says his Golden Lions plan on being back in the Southwestern Athletic Conference Championship Game later in the fall, he means it.

For the time being, he’d like for the Golden Lions to take care of business in today’s title trip first.

“The day I was named interim head coach, I told them we would play for championships and we would win championships,” said Gamble, whose Golden Lions will play Alabama A&M today for the SWAC title in Jackson, Miss. “It feels great to represent our community, our university and our organization. It’s building a sense of pride and a certain standard of where we need to be … and be there all the time and not just sometimes.”

“We’re going to sustain this and always give our university and our community something to be proud of.” Happy times have been few and far between for UAPB (4-0) since it captured it’s last SWAC title nine years ago. The Golden Lions have a .247 (19-58) winning percentage and one winning season in the seven prior to this year. Gamble’s words about playing for titles might have even generated a snicker or a side-eyed look from fans during those lean years from 2013-19. But 2021 has been different.

The Golden Lions turned some heads within the SWAC when they beat league heavy-hitters Southern and Grambling State in consecutive weeks before winning against Mississippi Valley State and Prairie View A&M — teams UAPB had lost to in 10 of its previous 14 meetings combined.

The run the Golden Lions have put together was so impressive that they’re ranked 25th in the FCS coaches poll for the first time ever.

“Coach Gamble has done a super job with those guys,” Alabama A&M Coach Connell Maynor said. “He’s got those guys playing hard in all three phases. They’ve got good game plans, they’re well-coached, and they play hard. They’re going to be prepared, and so we’ve got to get prepared.

“It should be a great football game, and we’re looking forward to the challenge.” Today’s battle between the Golden Lions and the 22nd-ranked Bulldogs is one that appeared to be in the cards as the season went along.

Both teams won three games away from their home stadiums this year, and each is trying to win a second outright conference championship. In addition, Gamble and Maynor are both finalists for the Eddie Robinson Award, which is given to the FCS Coach of the Year, and each has been at their respective schools for three years.

Alabama A&M and UAPB also have split their past two meetings, with each winning on the road. The Bulldogs also won the 2006 SWAC title game by beating the Golden Lions 22-13.

There may not be a shortage of points scored. The Bulldogs and Golden Lions both average 35.3 points per game.

“We always say respect all, fear none,” said May-nor, who signed a four-year extension with the school Thursday. “We know we can score, we know [UAPB] can score, and it may be a shootout. It may be 54-52, and the last team with the ball may have a great chance to win the football game.” Quarterback Aqeel Glass, the conference’s player of the year, guides a Bulldog offense that piles up a league-leading 486.7 yards per game. The senior, who’s also a finalist for the Walter Payton Award that’s handed out to the most outstanding player in the FCS, has completed 67 of 113 passes for 1,084 yards with 13 touchdowns and 3 interceptions. He threw for a season-high 440 yards and six touchdowns while adding another score on the ground in a 52-43 victory over Jackson State on April 10.

The 6-5, 215-pounder also has a wealth of targets to throw to, three of whom rank in the top five in the SWAC in receiving. Senior Zabrian Moore and sophomores Odieu Hilare and Abdul-Fatai Ibrahim have combined to catch 39 passes for 744 yards and 10 touchdowns.

“I hope it’s not a long day for us,” Gamble said about his team being able to stop Alabama A&M’s offense. “I think we play good defense, but Mr. Glass is a good football player. And to be honest, you’ll probably be watching two future pro football players, two guys that’ll be able to play at the next level somewhere.

Alabama A&M and UAPB are fourth and fifth in the SWAC in total defense, but both units could have their work cut out for them. Gamble, though, is confident in his defense.

“Being a former quarterback, it might sound crazy, but I put the game on our defense,” he said. “I told those guys that it might be an old-school way of thinking that you win championships with defense, but I still believe that. But it’s a big-time challenge this week.

TICKETS Starting at $25 and can be purchased at uapblionsroar.com/swacgame

LAST WEEK Both teams had their games canceled because of covid-19.