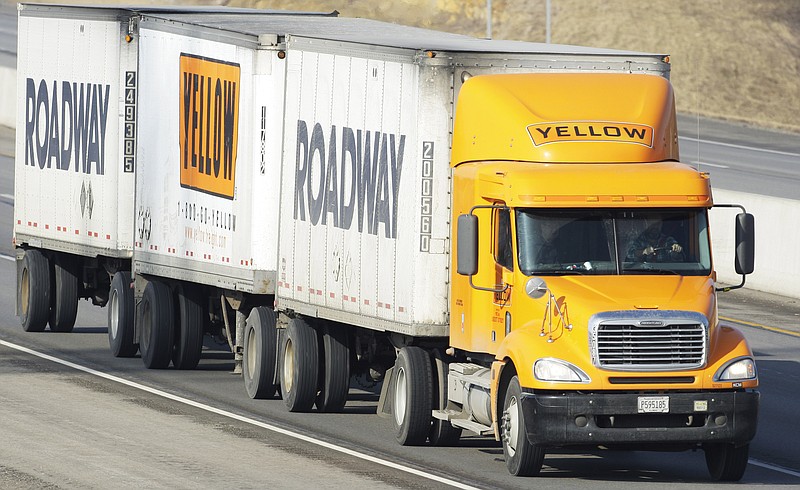 WASHINGTON -- A Kansas trucking company received a $700 million federal loan after what appear to be "missteps" by the Treasury Department and the Department of Defense, the Congressional Oversight Commission said in a report released Friday.

Commissioners want to know who determined that the money-losing company, known at the time as YRC Worldwide, was "critical to national security" and thus qualified for the national security loan program, which was authorized last year near the start of the covid-19 pandemic.

The company got the loan after spending $570,000 on lobbying last year, the report notes. The previous year, it had spent nothing, the report stated.

"The Commission makes note of the correlation between lobbying the government and Yellow's ability to secure a $700 million loan," the report stated.

U.S. Rep. French Hill, R-Ark., one of three people now on the commission, said Friday that the company didn't appear to qualify for the narrowly tailored program.

"The $700 million taxpayer backed loan Treasury made to Yellow, formerly YRC, was a mistake," Hill said in a written statement. "Based on the oversight work conducted by the Commission, there is no evidence to support Yellow being critical to national security which means these loans should never have been executed."

A spokeswoman for Yellow, Heather Nauert, portrayed the loan as a wise investment that benefited American workers.

"Our agreement with the U.S. Department of the Treasury was mutually beneficial. The department invested in the future of the Company and our 30 thousand employees with the belief that it would pay off. Today, taxpayers are beneficiaries of this investment," she said in a written statement. The federal government ended up with about a 30% stake in the company.

The Treasury Department has said it approved the loan "based on a certification by the Secretary of Defense that YRC is critical to maintaining national security."

Commissioners said they want to know "who made the determination in the chain of command at DOD [the Department of Defense] that they were, in fact, critically important."

In its report, the commission said it "has been unable to substantiate" that assertion.

If the Pentagon's decision-making process was flawed, pinning the blame on the correct party is likely to take some digging. The chain of command for the national security designation appears to have had seven layers, the commission said.

Next comes the U.S. Transportation Command, followed by Defense Freight Transportation Services and its primary contractor, Crowley Logistics. Yellow, in this instance, occupies the seventh and final rung.

In written answers to commissioners' questions, Transportation Command said on March 3 that it had not asked Crowley "whether it believed YRC should be designated as critical to national security."

Yellow, in Crowley's view, is not irreplaceable.

"Per analysis from Crowley, the anticipated impact of YRC terminating of [less-than-truckload] services would be minimal and the volume readily consumed by the market. This conclusion is due to the robustness of trucking capacity available to [the Department of Defense] , the resiliency of the motor freight industry to deftly respond to variations of supply and demand, and the overall limited depth and level [of] utilization YRC," Transportation Command officials wrote.

Nauert, the shipping company spokeswoman, said Yellow "has maintained a longstanding relationship with the Department of Defense" and has military contracts beyond those involving Crowley.

"Transporting goods for the federal government is highly complex. Not all carriers can or want to do it. We provide a highly specialized service that enables our equipment to access Department of Defense facilities. This requires drivers to have specific credentials and training. In addition, our more than 300 terminals across the United States enable Yellow to quickly and efficiently access Department of Defense distribution hubs and bases. We are proud to continue to be critical to the national security of this great nation," she said.

The Coronavirus Aid, Relief, and Economic Security (CARES) Act created the oversight commission to monitor the act's lending administered by the Treasury Department.

After making inquiries for more than nine months, the commissioners said they still have questions about the Yellow loan.

"The Commission and its staff have had difficulty navigating the DOD [Department of Defense] and its many facets. The staff had difficulty locating the right personnel within the agency to discuss the Yellow loan and, even after determining the proper track, DOD was often slow to respond to the Commission," the report stated.

The Arkansas Democrat-Gazette was unable to obtain a reply Friday from military officials. The Pentagon directed questions about the report to the U.S. Transportation Command, which subsequently referred questions back to the secretary of defense's office.

While the Treasury and Defense departments have both exhibited "poor transparency" concerning the loan, the Defense Department "has been particularly nonresponsive, which is disturbing," Hill said.

The CARES Act included $500 billion that the Treasury secretary could lend or invest in order "to provide liquidity to eligible businesses, States, and municipalities related to losses incurred as a result of coronavirus."

Of that, up to $17 billion was reserved for "businesses critical to maintaining national security." Ultimately only 11 loans, totaling $736 million, were approved.

Pentagon officials have not revealed precisely how the determination was made. Then-Undersecretary of Defense Ellen Lord declined to appear before the commission in December and publicly answer questions, though she later spoke privately with the commission.

At that hearing, then-Treasury Secretary Steven Mnuchin said he was "quite proud" of the loan and predicted taxpayers would ultimately "make money" on the deal.

"I can tell you I've received calls from the company, from truckers, from other people who really appreciate this," he told commissioners.

YRC had 30,000 employees when the loan was being contemplated.

Without it, "I do think it would've been bankrupt, and the company would have fired lots of people" he added.

Shares of YRC Worldwide jumped from $1.85 on June 30 to $3.23 on July 1, the day the Treasury Department announced plans to provide the money.

Commissioners raised questions about the loan in a report later that month. They've been seeking answers ever since.

Since the loan became public, the stock's price has continued rising, closing Friday at $9.17 a share. The company continues to employ roughly 30,000 people, a company spokeswoman said.

At the December hearing, Mnuchin said the Yellow loan had bipartisan backing on Capitol Hill.

"There are plenty of people who are very senior people in Congress, on both sides, Republicans and Democrats, that encouraged me" to make the loan, Mnuchin said.

The company did receive help from lawmakers, the report notes.

In a year when covid-19 closed Capitol Hill to most visitors, the company's lobbying expenditures soared.

"Yellow spent $570,000 on lobbying efforts in 2020 compared to zero in 2019, $80,000 in 2018 and $75,000 in 2017," the report stated. "The Commission makes note of the correlation between lobbying the government and Yellow's ability to secure a $700 million loan. The Treasury confirmed that several Senators and members of Congress sent letters to Treasury urging them to underwrite Yellow's loans. Yellow has previously engaged in these types of activities."

This isn't the first time the company's lobbying expenditures have spiked, the report noted.

"In 2009 during the financial crisis, Yellow also was on the verge of bankruptcy, and Yellow had planned on applying for a $1 billion federal government bailout before entering into a debt swap arrangement with a group of banks. Yellow's lobbying efforts, in conjunction with intensive political contacts by organized labor, totaled $800,000 for that year. The following year in 2010, Yellow spent approximately $150,000 less on lobbying and the spending decline trended until 2020."

"We worked hard to ensure that our approximately 30 thousand employees, mostly union members, could keep their jobs while our more than 200,000 customers would continue to receive their shipments during a crucial time. We are proud to have received the support of many Democrats and Republicans in Congress. In 2020, we reached a mutually beneficial loan agreement with the U.S. Department of Treasury that protects American jobs while benefitting taxpayers. The terms of this loan protect the American taxpayer," she said.

In his written statement, Hill portrayed Yellow as unworthy of additional federal assistance.

"It's clear to me, for over a decade now since the start of the financial crisis and now in the midst of pandemic, Yellow has survived only through government intrusion and bailouts. American taxpayers should not have to keep underwriting debt to pay for Yellow's poor financial decisions," he added.