Medical help from abroad arriving in stricken nation by Compiled Democrat-Gazette Staff From Wire Reports | May 1, 2021 at 4:20 a.m. 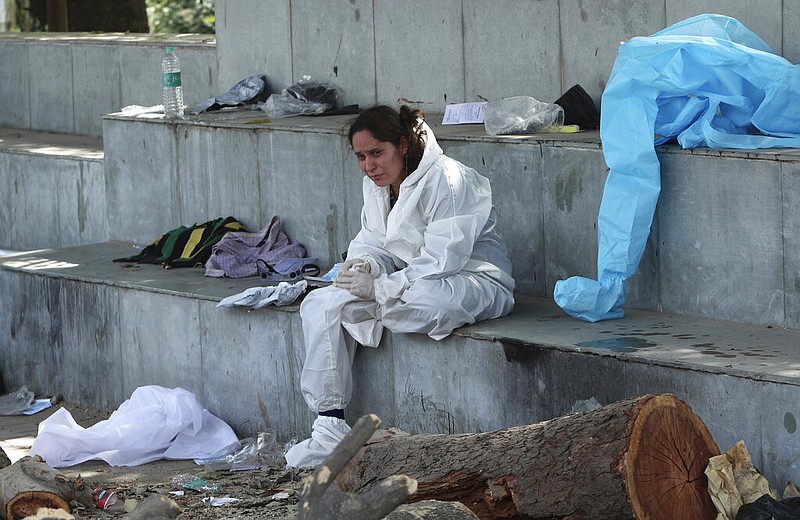 A relative of a person who died of covid-19 mourns Friday, April 30, 2021, at a crematorium in Jammu, India. The United States sent medical supplies to India on Friday as the country logged more than 386,000 new cases of the disease. (AP/Channi Anand)

The White House on Friday announced plans to restrict travel from India during a coronavirus outbreak there that has prompted a flood of emergency aid from around the world, including two U.S. Air Force transport planes full of supplies.

The Biden administration said it was acting on the advice of the federal Centers for Disease Control and Prevention, joining other nations that have already stopped flights from India. The policy, which takes effect Tuesday, will not apply to citizens or permanent residents of the United States.

The U.S. already requires negative tests and quarantines for all international travelers. Further restrictions are in place on travel from China, Iran, the European Union, the United Kingdom, the Republic of Ireland, Brazil and South Africa.

Meanwhile, desperately needed medical aid from the United States and other nations began to arrive in India. The U.S. planes carrying oxygen cylinders, N95 masks and rapid diagnostic tests landed at Indira Gandhi International Airport in New Delhi on Friday, carrying the first of several shipments that the White House has pledged. Additionally, a CDC team of experts was expected to soon be on the ground to help the nation's health officials.

"Just as India came to our aid early in the pandemic, the U.S. is committed to working urgently to provide assistance to India in its time of need," Secretary of State Antony Blinken said Thursday on Twitter.

India's Health Ministry on Friday reported another record number of new cases, logging 386,452 infections over the previous 24 hours. It has registered more than 300,000 new cases each of the past nine days, taking its total infections above 18.7 million -- second only to the United States.

There were 3,498 new fatalities reported Friday, pushing India's official death toll past 208,000, although medical experts say that number is probably a substantial undercount.

On Friday, just six intensive-care beds were available in the capital, New Delhi, a city of more than 17 million people, according to a government database. Crematoriums and burial grounds were also running out of space, according to media reports, and in some places, funeral workers resorted to burning bodies in parking lots.

[Video not showing up above? Click here to watch » https://www.youtube.com/watch?v=urwrSvKXTv0]

Fights have broken out among grieving families, and stocks of wood used for funeral pyres are running low.

"Ward rounds are now scenes from Dante's 'Inferno,'" Zarir Udwaria, a physician in Mumbai, wrote in the Financial Times. "Row upon row of patients waging a desperate struggle to breathe, their cries for help often falling on deaf ears as overworked medical staff struggle just to keep going."

Meanwhile, several Indian states said Friday that they would either halt or delay mass immunization campaigns because of a severe shortage of vaccine.

India, which began vaccinating vulnerable populations in January, was scheduled to begin a nationwide drive today aimed at immunizing everyone older than 18. However, at least 15 states have said they don't have enough supplies, according to the Wire news website.

In Delhi, the chief minister said at a briefing Friday that the national capital territory had not yet received the doses it requested from the Serum Institute of India and Bharat Biotech.

"Don't queue up for vaccines tomorrow. As soon as vaccines arrive, we will let you know. Then you can come for shots," Arvind Kejriwal told India's NDTV.

India is one of the world's largest vaccine producers, but it has struggled to ramp up production as global demand for specialized materials has soared. The shortage of doses is having a ripple effect in other South Asian countries, including Bangladesh, Nepal and Sri Lanka, that have been relying on shipments from India.

The Serum Institute is manufacturing a domestic version of the vaccine from British-Swedish firm AstraZeneca and Oxford University, while Bharat Biotech is producing Covaxin, a locally made shot.

But states and private hospitals in India have been largely left to fend for themselves, ordering doses directly from manufacturers. Critics say the system has contributed to the chaos.

The central government "seems to be shedding its own responsibility," Gourav Vallabh, national spokesman for the Indian National Congress, wrote in a column for the Wire.

"Who to procure vaccines from? What quantity to procure? At what price? How much to export?" he wrote. "Each state will now have to build its own strategy, arrange its own funds, use its own influence to get the vaccine stocks."

India's Supreme Court criticized the policy Friday, saying states were being forced to overpay. The court suggested that the government reconsider but did not issue any binding judgment.

The vaccine shortfall comes as India is battling multiple variants, including one discovered in the country in December. Known as B.1.617, it contains mutations associated with increased transmissibility and has now been found in more than a dozen nations, including China.

Because genome sequencing in India is limited, experts say it is not clear whether the variant is responsible for the current surge. A more-contagious variant identified in Britain has helped spur several outbreaks.

On Friday, French Health Minister Olivier Veran told France Info radio that it was still not certain whether available vaccines were effective against B.1.617, after France detected its first three cases of the variant this week, Reuters reported.

Veran said the danger of the variant must not be underestimated.

Meanwhile, Indian scientists Friday appealed to Prime Minister Narendra Modi to publicly release virus data that would allow them to save lives as the army opened its hospitals in a desperate bid to control the crisis.

The online appeal -- signed by more than 350 scientists -- asks the government to release data about the sequencing of variants, testing, recovered patients and how people were responding to vaccines.

The appeal says "granular" data on testing was inaccessible to nongovernment experts and some government experts, too. Modeling work to predict surges was being done by government-appointed experts with insufficient information, it says. Similarly, scientists had failed to get information that would let them predict the amount of beds, oxygen or intensive-care facilities that would be needed, it says.

The appeal urged the government to widen the number of organizations sequencing the virus to study its evolution, and to increase the number of samples being studied. It added that restrictions on importing scientific raw materials -- to make India 'self reliant' is a key goal for Modi and his government -- was an obstacle. "Such restrictions, at this time, only serve to impede our ability to deal with COVID-19," it says.

Army chief M.M. Naravane met with Modi on Thursday to discuss the crisis.

Naravane said the sick can approach their nearest army hospitals for help. Troops were also assisting with imported oxygen tankers and vehicles where specialized skills are required, the government said.

Information for this article was contributed by Erin Cunningham and Antonia Noori Farzan of The Washington Post; and by Zeke Miller, Darlene Superville, Ashok Sharma and Aniruddha Ghosal of The Associated Press. 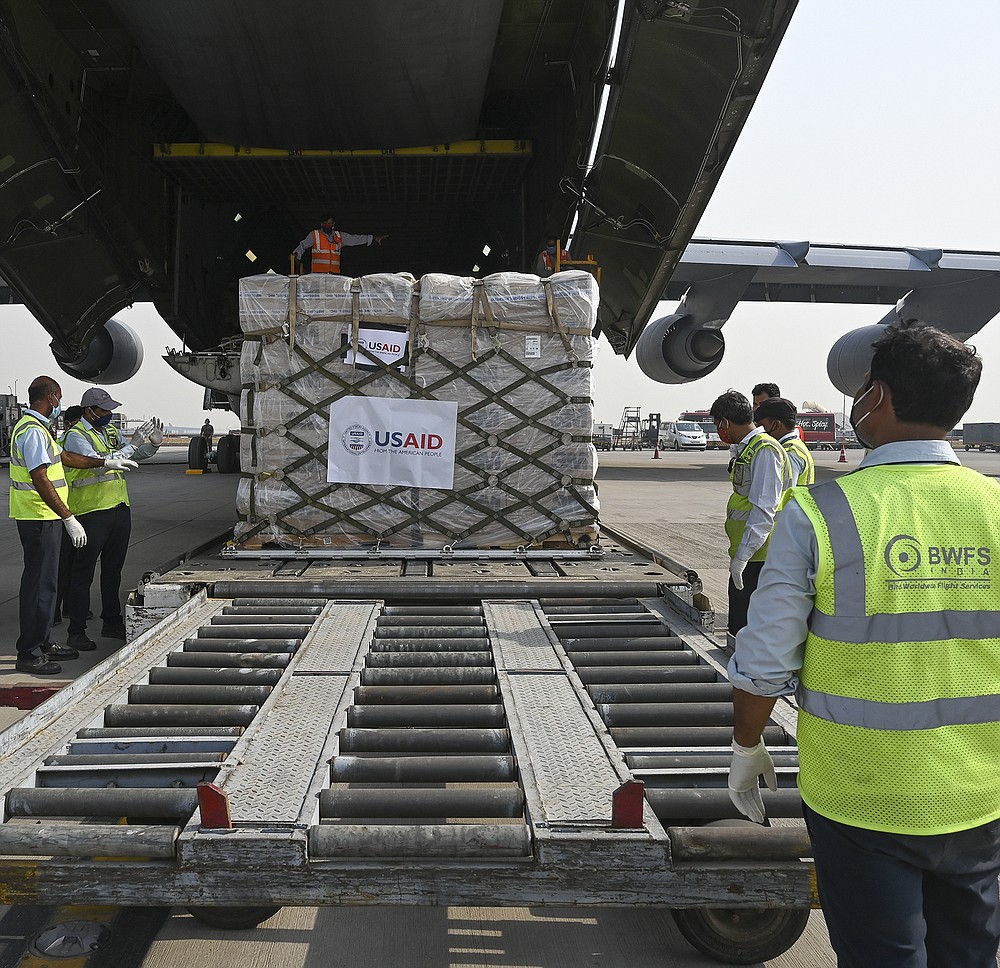