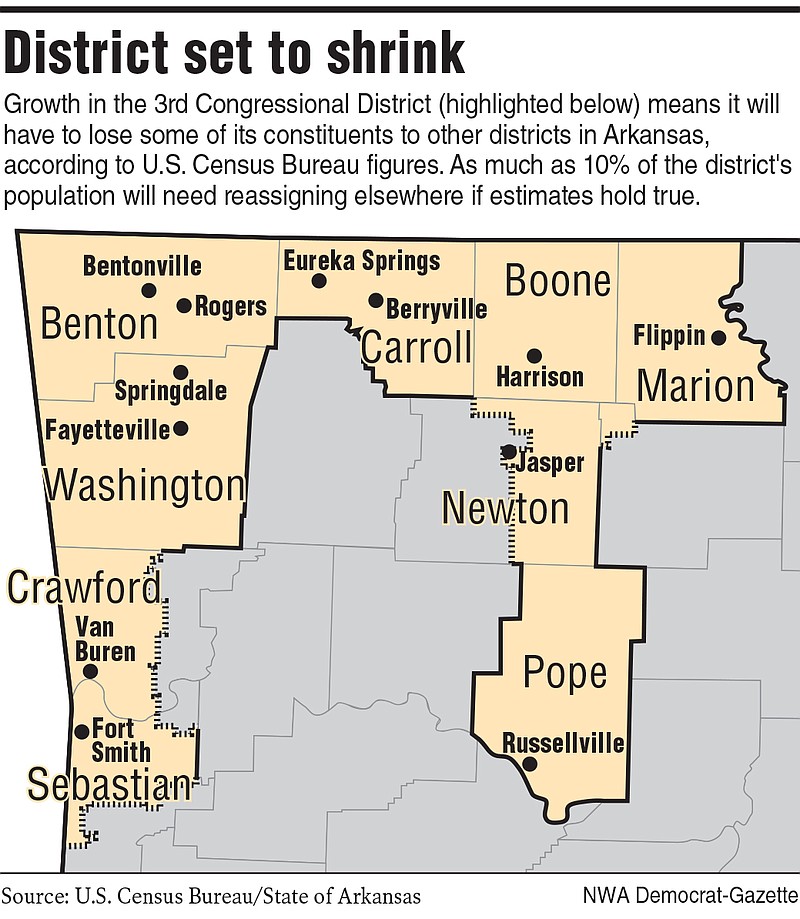 Northwest Arkansas' 3rd Congressional District stands to lose about 76,000 constituents when the Legislature redraws the borders later this year, the most recent available estimates indicate.

The need to reduce the 3rd District surprises no one, U.S. Rep. Steve Womack, a Republican from Rogers, said Thursday. Northwest Arkansas' growth during the past 10 years is an obvious fact and will continue, he said.

"Everybody saw it coming," Womack said of the need to shrink the district's boundaries. "I've had constituents in Marion, Pope and even Boone counties tell me they'd really like to stay, but they can see what's happening."

Harrison is the Boone County seat. Yellville is county seat for Marion County and Russellville for Pope County.

Those three counties are on the eastern side of the district. It is possible the district could lose territory on the southern side instead, where Fort Smith is, but any sizable reduction has to come from one of those two directions, Womack said.

That is where the people live who aren't in the Washington-Benton county core, he said.

"Benton and Washington counties are going to be their own congressional district someday," he said.

One figure became certain after Monday's announcement. Arkansas' official population count for April 1, 2020, stands at 3,013,756. This entitles the state to four seats in the House, the same number it has, the Census Bureau announced.

Each of Arkansas' four congressional districts needs to be as close to 753,439 people as possible to ensure equal representation as required by federal law. Alison Wright, head of the Arkansas Data Center, confirmed the numbers Wednesday. The center is the Census Bureau's chief research partner for the state.

The Legislature sets congressional district boundaries, work that cannot begin until the Census Bureau provides detailed maps showing where people live. Monday's announcement did not include a breakdown of population by existing congressional districts. The best available figures for those are only estimates, Wright said.

"It's the best guess the Census Bureau can make, but it's only an estimate," she said of district-by-district figures.

By these estimates, the 3rd District exceeds the new, optimum district population size by 75,710 people. The 2nd District could lose about 14,000 constituents. Meanwhile, the 1st District needs to gain about 34,000 residents. The 4th District needs about 51,000 more.

If the 3rd District estimates are even close to correct, that 75,000 figure means the district is "overweight" by 10%.

During the previous redistricting attempt, officials considered taking Fayetteville in Washington County out of the district and putting it in the 4th District, but Womack said he considers any similar attempt this time as unlikely. In every census, the 3rd District will probably get closer to its Benton-Washington county core, he said.

The attempt to remove Fayetteville from the 3rd District happened when Democrats had a majority in the Legislature. Democratic legislators tried to shore up the Democratic margin in the 4th Congressional District that they held by giving it Fayetteville, a more liberal, university town.

No such split would help the Democrats today with the 4th District heavily Republican, Womack said.

Benton County has an estimated 280,000 people. Washington County has about 240,000, for a combined total of 520,000. Those two counties lie deepest within the 3rd District, tucked into the northwestern corner of the state.

"This normally would have been done by now," said Jon Moran, senior vice president for governmental affairs for the Rogers-Lowell Area Chamber of Commerce. Moran served on then-Gov. Mike Beebe's staff during the 2011 redrawing of congressional district boundaries after the 2010 census. New boundaries were settled and maps drawn by this time in 2011, he said.

Detailed 2020 census results were stalled for months by the ongoing covid-19 pandemic and legal disputes.

Legislative district boundaries are set by a state board consisting of the governor, the secretary of state and the attorney general. They are drawn after the congressional districts are determined.

"This time, we're going to be doing congressional districts and then legislative districts with very little time between the two," Moran said. "It will practically be all at the same time."

The 3rd District faced a similar reduction after the 2010 census. The Democrats' plan to carve heavily Democratic Fayetteville out of the 3rd District died in the state Senate. South Arkansas senators balked at Fayetteville becoming the largest city in their district overnight.

Legislators hammered out a compromise that stripped Madison County from the 3rd District, even though it shares a judicial district with Washington County. Parts of Sebastian County moved into the 4th District, but Forth Smith remained in the 3rd District.

Fort Smith is the county seat, by far the largest town in its region and one of the largest in the state. Also, Crawford County saw half of its territory go into the 4th District, splitting the town of Alma between the two districts.

Russellville and all of Pope County stayed in the 3rd District, but putting the county within a contiguous district boundary led to cutting Newton County in half.

Whatever happens this time, "I can wholeheartedly say Fort Smith wants to stay in the 3rd District," said Michael Barr, chairman of the Fort Smith Regional Council. The council is a group of the region's business and community leaders that works on regional problems.

"Fort Smith and our neighboring communities share many similarities with communities in Northwest Arkansas," Barr said. "Not only are our educational needs and efforts very comparable, but the workforce challenges are parallel."

"East of Northwest Arkansas and south of Fort Smith, the state is much more rural," Barr said. "We don't have the same interests."

Steve Clark, president of the Fayetteville Chamber of Commerce, is a former state attorney general. He agreed with Barr on the shared interests of Fort Smith and Northwest Arkansas.

"We all have airports," Clark said of Fort Smith and Northwest Arkansas' largest cities. "We all have higher-education institutions. We all have medical schools. We are much more alike to each other than we are to much of the surrounding area of the state."

Although the overall size of the 3rd District needs to reduce, Barr said he hopes the state reunites the "bedroom" communities of Fort Smith from the 4th District back into the 3rd District.

"Our workforce lives in those communities," he said.

Womack also said he hopes some of the splits in the 2011 redistricting are mended.

"Alma is split right down the middle, along U.S. 71," he said. "That never should have happened."