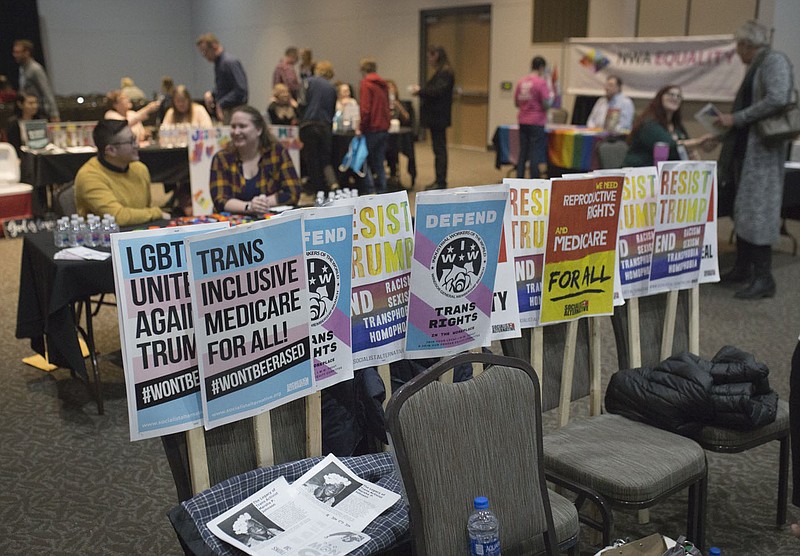 Signs are displayed during Transgender Day of Visibility on March 31, 2019, at the Fayetteville Town Center. The Fayetteville City Council will consider a resolution Tuesday affirming the city's stance to protect the rights of transgender residents and visitors. (File photo/NWA Democrat-Gazette/Charlie Kaijo)

FAYETTEVILLE -- Laws passed by the state Legislature dealing with transgender youths are discriminatory and run counter to the values of the city, Fayetteville Mayor Lioneld Jordan said.

Jordan sponsored a resolution that the City Council will take up Tuesday affirming the city's commitment to diversity, inclusion and protection of transgender residents and visitors.

Legislators who sponsored the various state measures said their bills don't discriminate against transgender people. The city's resolution is largely unnecessary, they say.

Jordan referred to several bills set to become state law this summer as inspiring him to sponsor the resolution.

A House bill sponsored by state Rep. Robin Lundstrum, R-Elm Springs, prohibits surgeries and hormone treatment for transgender minors. Gov. Asa Hutchinson vetoed the measure, but a majority of the Legislature voted to override his veto.

A bill sponsored by state Sen. Missy Irvin, R-Mountain View, enables private legal cause of action against schools allowing transgender female student athletes to play on teams with cisgender female athletes. Cisgender refers to someone whose gender identity corresponds with their birth sex. An accompanying measure, also sponsored by Irvin, gives the state attorney general cause of action against schools that knowingly allow cisgender male or transgender female students to play on female sports teams. Hutchinson signed both bills into law.

Another bill sponsored by state Sen. Kim Hammer, R-Benton, allows medical providers to opt out of procedures they disagree with based on religious or moral beliefs. Hutchinson signed the bill.

The bills will become law in about 90 days, barring court challenges.

A House bill sponsored by state Rep. Mary Bentley, R-Perryville, that would have prohibited requiring teachers from addressing students by a name or gender inconsistent with the student's biological sex failed in the Senate Education Committee.

Jordan acknowledged that the resolution will have little legal power, but he wanted to send a message. The wrong message is coming from a majority of state leaders, he said.

"The city of Fayetteville wants to stand for equality, diversity and inclusion," Jordan said. "I want people to feel welcomed. I want people who come here from all over the world to feel like this is a place where they can come and everyone will feel welcomed."

Jordan said "everyone" includes those who disagree with him on the issues raised by the resolution. They can speak their piece at the ballot box, he said.

As part of a preamble paired with the resolution, City Attorney Kit Williams referred to the 2015 vote to approve the city's civil rights ordinance as evidence that a majority of residents oppose discrimination against LGBTQ people. The measure passed with 7,698 votes in favor, or 53%, to 6,884 votes, or 47%, against.

The state Supreme Court struck down the city's ordinance, but the city's commitment to oppose discrimination stands, Williams said.

The City Council also approved a welcoming plan in 2018 that sought to remove barriers impeding any person from feeling welcome and appreciated in the city, Williams said. Last year, the council enacted a hate crime component in prosecutions of misdemeanor offenses.

"The Arkansas Legislature has been dead set on stripping away both the rights of people who are transgender and the rights of local communities to stand up for residents and visitors," he said. "We encourage the people of Fayetteville to contact their City Council members to support Mayor Jordan's resolution reaffirming the intent of our voters to value every resident regardless of their gender identity or sexual orientation."

Lundstrum said the bill she sponsored doesn't deny health care for transgender youths as Williams asserted in a letter to the City Council that was attached to the resolution. The bill protects minors from experimental use of drugs, she said.

"I'm sure the Fayetteville City Council and Fayetteville residents would all agree that we should protect minors," Lundstrum said.

Lundstrum said drugs used for gender treatment have long-term implications and health consequences, and the bill ensures that the person deciding to take them is at least 18 years old.

"It doesn't deny health care. They have every opportunity for health care and counseling," she said. "It's very important to get that correct."

Lundstrum said she had no issue with the city's resolution to protect all people, saying her bill was intended to protect children.

Hammer said Jordan misinterpreted the bill Hammer sponsored on medical providers' conscience. The bill affords protection to those in the medical field who want to exercise their conscientious right not to offer a particular procedure, Hammer said.

"It doesn't mean that those procedures are not allowed," he said. "They would just need to find a medical provider that would provide that particular service that somebody of the transgender persuasion is wanting."

As far as the resolution, Hammer said it's unfortunate Jordan feels he needs to make such a statement.

"I think that would have been what is afforded to all people from all walks of life," Hammer said. "It's unfortunate he feels that he needs to reassure the citizens of Fayetteville that what should be a given fact is having to be stated."

Irvin didn't respond to messages seeking comment. Bentley declined to comment, saying residents of Fayetteville should hear from their representatives.

Jordan commended Fayetteville's state legislators Reps. David Whitaker, Nicole Clowney and Denise Garner and Sen. Greg Leding for voting against the measures coming from the state. However, a majority of the Legislature supported measures harmful to classes of people who should be protected, he said. Economic hardship also likely will come as a result, he added.

"I'm not saying all the legislators voted for all these. But a majority of them did. And I disagree with the laws. I think we need to be an open and welcoming community," Jordan said. "You've heard me say this 100 times: no matter what the color of your skin, or your religious belief, or what country you come from, or who you love -- if you're truly going to be a welcoming community, that's what you stand for. I believe this resolution stands for that."

“A resolution to affirm the city of Fayetteville’s commitment to diversity, inclusion and protection of our transgender citizens, residents and visitors.

Section 2: The City Council of the city of Fayetteville, Arkansas, hereby affirms our commitment to do everything in our power to honor and protect all persons regardless of their gender identity so that everyone will feel welcome and safe in Fayetteville.”