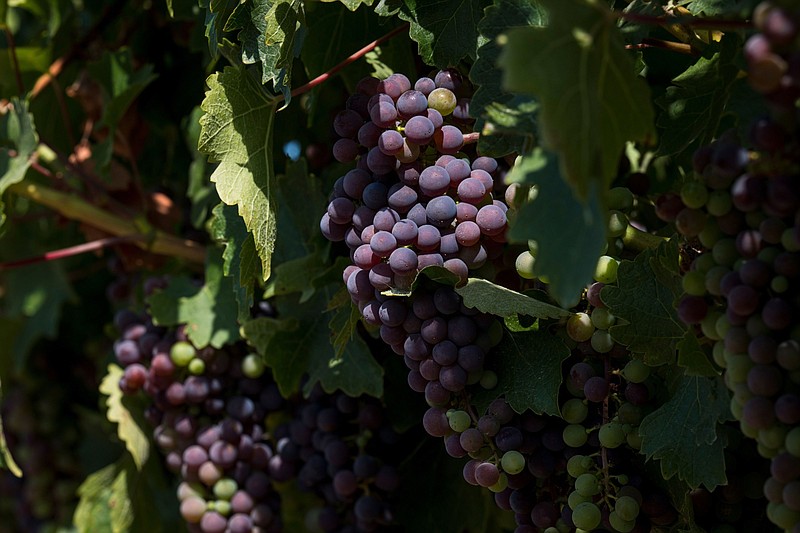 Grapes hang on vines in a vineyard in Napa, Calif., on July 29, 2020. MUST CREDIT: Bloomberg photo by David Paul Morris.

On a weekend afternoon, Etienne Bizot, the head of Bollinger Champagne, was sipping wine on the terrace at Oregon's Ponzi Vineyards. He was on vacation, playing tourist in the Willamette Valley, the heart of the state's pinot noir territory. As he compared three different Ponzi pinots alongside a plate of cheese, he gazed out at the vines. They looked splendid.

That was two years ago. Last month he bought Ponzi, the first acquisition outside France for his family holding company, Societe Jacques Bollinger. Bizot is chairman and CEO.

And the Ponzi family, one of Oregon's wine founding pioneers 50 years ago, became the latest Americans to sell off a historic wine estate.

This high-profile deal is part of a new wave of European vintners seeking toeholds in the U.S. just as some of America's oldest wineries are ready to cash in.

"It's about as warm a market as I remember," says Rob McMillan, executive vice president and founder of Silicon Valley Bank's Wine Division. "I've been watching nine to 12 European wine companies look for assets." He expects more sales than usual over the next year.

A recent Silicon Valley Bank survey found that almost 50% of Napa and Sonoma wineries consider selling a possibility in 2021. For some regions, including the Sierra Foothills, a zinfandel haven east of Sacramento that was once the epicenter of the gold rush, it's 80%.

The latest European influx brings even more international flavor to American wine regions, and it's likely to influence the style of the wines. After Francois Pinault, owner of first-growth Chateau Latour, purchased Napa's Araujo Estate in 2013, the wines have become more precise and elegant.

But not everything will change. Bizot, for example, has no plans to create an American bubbly that might be worthy of James Bond (Bollinger is 007's favorite quaff). At least not yet. He's looking to boost the reputation of Ponzi's pinots and chardonnays, and to leverage awareness and sales of Bollinger in the U.S.

"In general, French producers have been the leading investors in the U.S. wine industry, followed by other countries," explains Mario Zepponi of mergers-and-acquisitions firm Zepponi & Co., who says foreign vintners are motivated by access to U.S. consumers and the world's largest wine market.

Also, prices for vineyard land in Oregon and California are way below those in Champagne, Burgundy and Bordeaux.

What motivates sellers, Silicon Valley Bank's McMillan says, are "all-time-high market valuations." Like Anna Maria and Luisa Ponzi, other wine families are rethinking strategies for the future, factoring in the increasing challenges, costs and risks of running an independent winery today.

The growing number of wineries makes market competition keener, and it's now harder for small family estates to sell through wholesale channels. The number of these is shrinking because of consolidation, and the pandemic and devastating fires haven't helped. Also, younger generations don't always want to follow their parents' dreams.

In 2020 the family owners of Napa estate Flora Springs, founded in the 1970s, sold their 280-acre vineyard and winery (but not the brand name) to Bordeaux's Chateau Smith Haut Lafitte, which picked up its first American property. They're calling it Cathiard Family Estate.

A couple of months later came news that Napa cabernet trailblazer Diamond Creek Vineyards, founded by the late Al and Boots Brounstein in 1968, had been acquired by Frederic Rouzaud, president of Maison Louis Roederer. Also the owner of Bordeaux Chateau Pichon-Lalande, he'd snapped up Sonoma star winery Merry Edwards in 2019.

And in January 2021 the Dyson family, behind Sonoma cult pinot noir winery Williams Selyem, sold a stake to the French Faiveley family, a producer of stellar Burgundies.

All these American families were in the same frame of mind as the Ponzi sisters, who'd run their family company for 30 years. "We're tired, and an opportunity came to us," says Anna Maria. Her sister, Luisa, who's staying on as winemaker and to oversee the vineyards for Bollinger, points out that they retained 100 acres of vines and land. They'll sell grapes to Ponzi, but the plan holds open a possibility for their children to start a wine venture under another name.

Oregon has several Burgundian-owned estates, from Domaine Drouhin to Louis Jadot's Resonance, among others. Although Bollinger is known for its Champagne, the family company also owns land in Burgundy. So Oregon's cool climate and main grapes -- pinot noir and chardonnay -- are comfort factors for Bizot.

Bordeaux chateaux, on the other hand, are drawn to California's Napa because both regions' wines rely on cabernet sauvignon, merlot and cabernet franc. Seven Napa wineries now have Bordelais owners.

"Still, the pandemic has hampered international M&A activity in the wine industry," says Zepponi, who handled the Bollinger and Roederer deals. Doing due diligence is tough when you can't travel.

The pandemic brought complications. The Cathiards had bought Flora Springs in January 2020 but couldn't get to their new property for 14 months.

"I could easily write a book about all the disasters we overcame, including the fires which had the good spirit of stopping at 12 km from our forest!" co-owner Florence Cathiard wrote in an email. "After three months of filing official papers and fighting with the U.S. Embassy, we managed to get National Interest Exception visas so we could oversee the work in progress."

French buyers clearly have patience. Faiveley spent a decade hunting a pinot noir property. Bollinger looked for four years. "We're a family and take our time," says Bizot. They also know what they're looking for. Not driven purely by financial metrics, observes Zepponi, Europeans are "much more aggressive in their bidding practices."

The Cathiards were seduced by Flora Springs' similarities to Smith Haut Lafitte. The Napa property is in one big piece, mostly in the top appellation of Rutherford. It also has a strong history, water resources and plenty of biodiversity.

For U.S. buyers, says McMillan, there's a lot of interest to find new acquisitions, too. "Part of the spur to buy is Fed-induced," he says. "Lower interest rates encourage wealthy individuals and companies flush with cash to invest. You can't get a return on cash."

Right now, competition for the best properties is keen. Duckhorn Portfolio and Vintage Wine Estates, both of which recently announced that they were going public, are on the prowl to buy, as are private equity funds. Nashville-based billionaire Gaylon Lawrence, who bought historic Heitz Cellar in Napa in 2018, grabbed Burgess Cellars in September 2020 and scooped up iconic Napa chardonnay maker Stony Hill Vineyard at the end of December.

Many historic estates, such as Ponzi, see prestige in selling to an important French producer, and they want to sell to another family with a long-term, generational view. "With Bollinger we saw an alignment of values, of respect for vineyards and quality," says Luisa Ponzi. "The sale is a validation of our parents' goal to put Oregon on the world wine map."

Expect more sales by the end of this year. Among Bordeaux chateaux that have said they'd love a Napa estate are Cos d'Estournel, Montrose, and Lafite Rothschild. 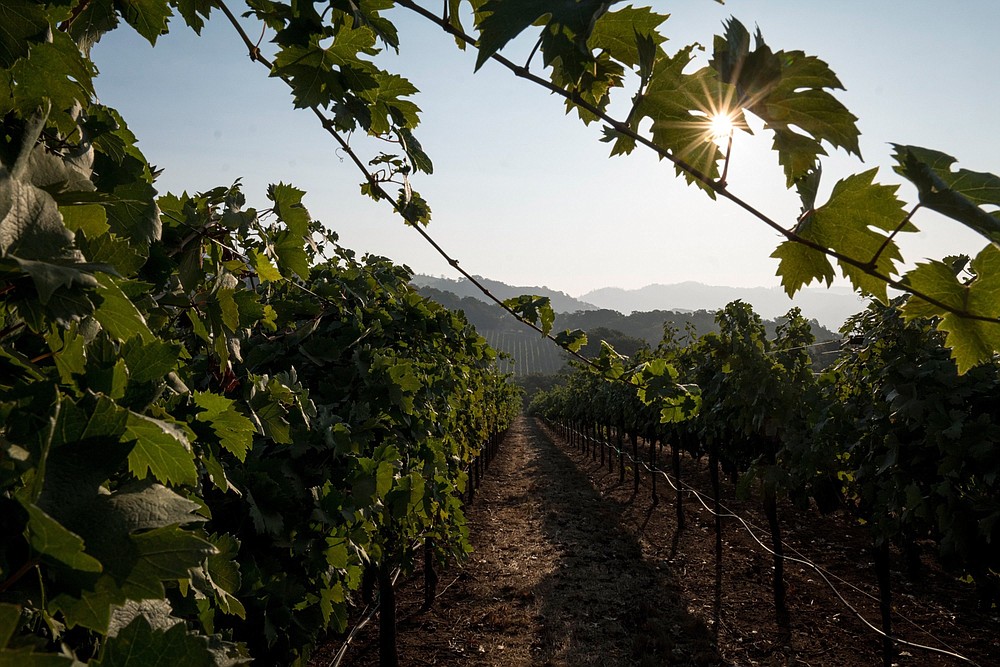 The sun rises over hill at a vineyard in Kenwood, Calif., on Sept. 21, 2020. SMUST CREDIT: Bloomberg photo by David Paul Morris.
ADVERTISEMENT