Labor protests renewed on May Day 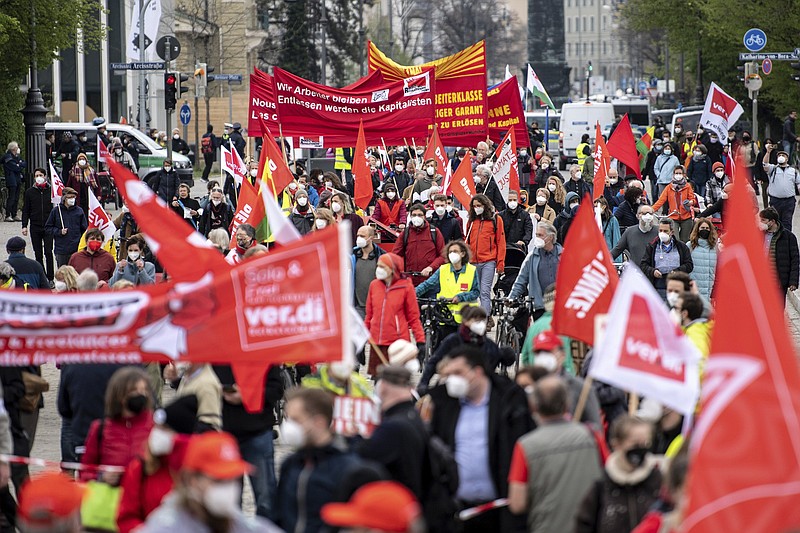 May Day marchers join a Munich rally Saturday of the German Federation of Trade Unions under the banner “Solidarity is the Future.” (AP/DPA/Matthias Balk)

PARIS -- Workers and union leaders who dusted off bullhorns and flags that had stayed furled during coronavirus lockdowns held slimmed-down but still boisterous -- and at times violent -- May Day marches Saturday, demanding more labor protections amid a pandemic that has turned economies and workplaces upside down.

In countries that mark May 1 as International Labor Day, the annual celebration of workers' rights produced a rare sight during the pandemic: large and closely packed crowds with marchers striding shoulder-to-shoulder with clenched fists behind banners.

In Turkey and the Philippines, police prevented May Day protests, enforcing virus lockdowns and making hundreds of arrests. In France, some marchers battled with riot police.

[Video not showing up above? Click here to watch » https://www.youtube.com/watch?v=a8N-Xbgq1hA]

For labor leaders, the day was a test of their ability to mobilize workers in the face of the profound economic disruptions.

In France, thousands took to the streets with union banners and flags, hemmed in by and sometimes scuffling with riot police. The masks worn by many marchers were a reminder of how much life has changed since the last traditional May Day celebrations in 2019, before the spreading virus wrecked lives and livelihoods and eroded civil liberties, often including the right to demonstrate.

Riot police clashed with some demonstrators in Paris and the southern city of Lyon, while burning roadblocks threw clouds of smoke into the air. Police charged crowds to catch suspected troublemakers and fired small amounts of tear gas. They said they made 34 arrests. Authorities also reported five arrests and 27 police officers injured in Lyon. But most of the dozens of marches across France occurred without incident.

Some demonstrations, constricted by virus restrictions, were markedly less well-attended. Russia saw just a fraction of its usual May Day activities amid a virus ban on gatherings. For a second-straight year in Italy, May Day passed without the usual large marches and rock concerts.

But in France, Germany and other places where rallies were allowed, workers vented their concerns over jobs and protections.

In Indonesia, Southeast Asia's largest economy, thousands voiced anger at a new jobs law that critics fear will reduce severance pay, lessen restrictions for foreign workers and increase outsourcing as the nation seeks to attract more investment. Protesters in the capital of Jakarta laid mock graves on the street to symbolize hopelessness, and marches were being held in some 200 cities.

In the Philippine capital of Manila, where a monthlong lockdown has been extended by two weeks amid a surge in infections, police prevented hundreds of workers from demonstrating at a public plaza, protest leader Renato Reyes said. But protesters did gather briefly at a busy Manila boulevard, demanding pandemic cash aid, wage subsidies and vaccines amid rising unemployment and hunger.

In Turkey, a few labor leaders were allowed to lay wreaths in Istanbul's Taksim Square, but riot police stopped many others from reaching the plaza. The Istanbul governor's office said 212 people were taken into custody for breaching virus restrictions.

In Germany, where previous May Day demonstrations have often turned violent, police deployed thousands of officers and warned that rallies would be halted if marchers failed to follow virus restrictions. Protests in Berlin called for lower rents and higher wages and voiced other concerns. Also marching were far-right coronavirus deniers and opponents of anti-virus measures, police said.

In Italy, police faced off against a few hundred demonstrators in the northern city of Turin. In Rome, Italy's head of state paid tribute to workers and health care workers.

Gallery: May Day around world

"Particularly heavy has been the impact from the crisis on female labor and on the access of young people to jobs," Italian President Sergio Mattarella said. 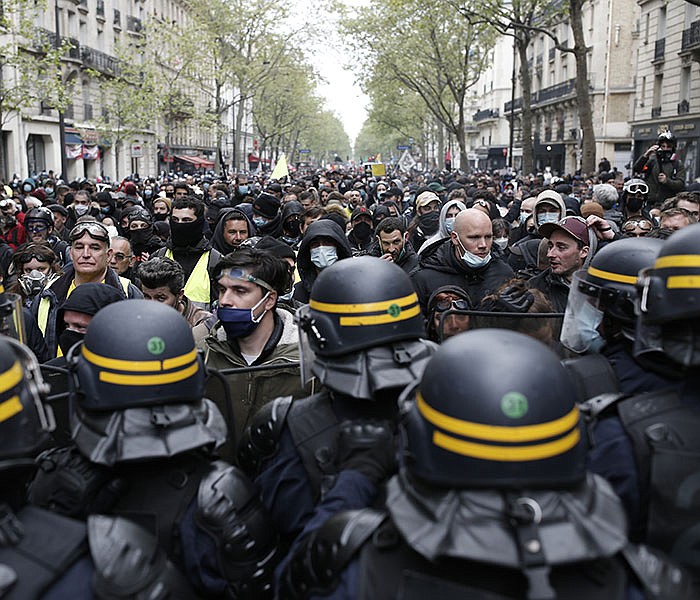 Riot police officers face off with demonstrators Saturday at a May Day march in Paris. Despite the pandemic, crowds around the world turned out, or were turned away, during the annual celebration of workers’ rights. More photos at arkansasonline.com/52mayday21/. (AP/Lewis Joly) 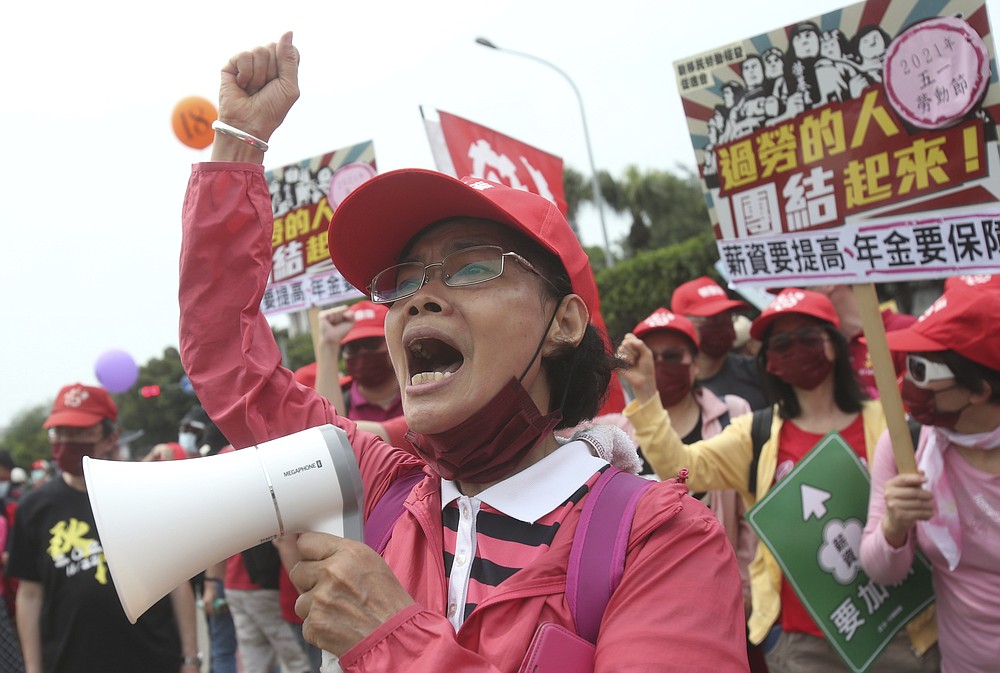 Taiwanese workers shout and hold slogans during a May Day rally in Taipei, Taiwan, Saturday, May 1, 2021. Thousands of protesters from different labor groups protest on the street to ask for increasing salary and securing annuity. (AP Photo/Chiang Ying-ying) 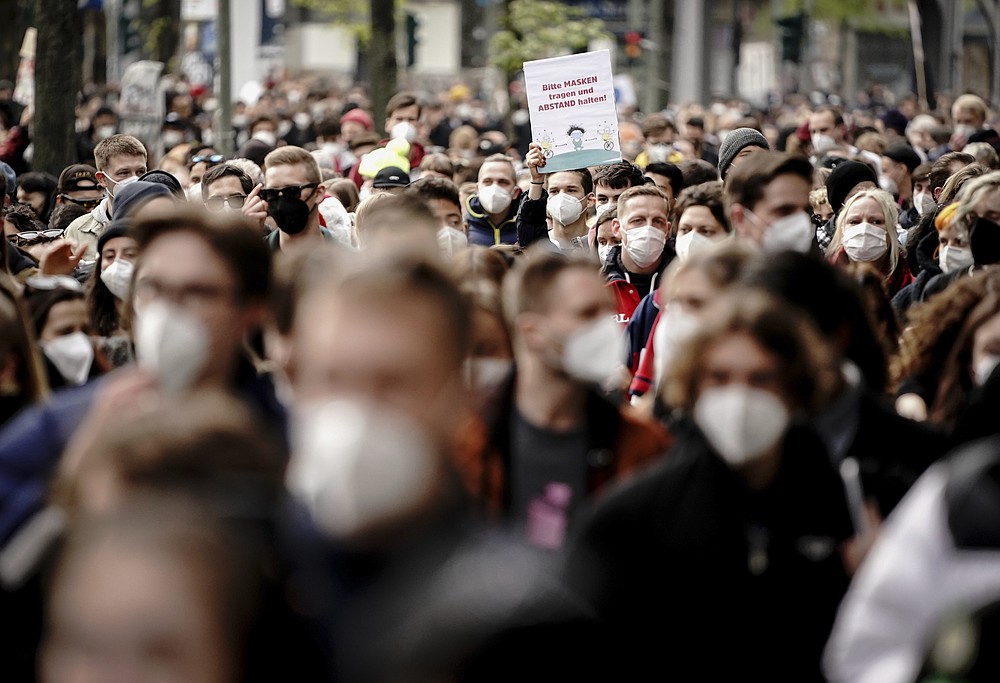 Participants demonstrate on May 1 "For the revival of the cultural and club scene, through the creative use of public space." in Berlin, Germany, Saturday, May 1, 2021. (Kay Nietfeld/dpa via AP) 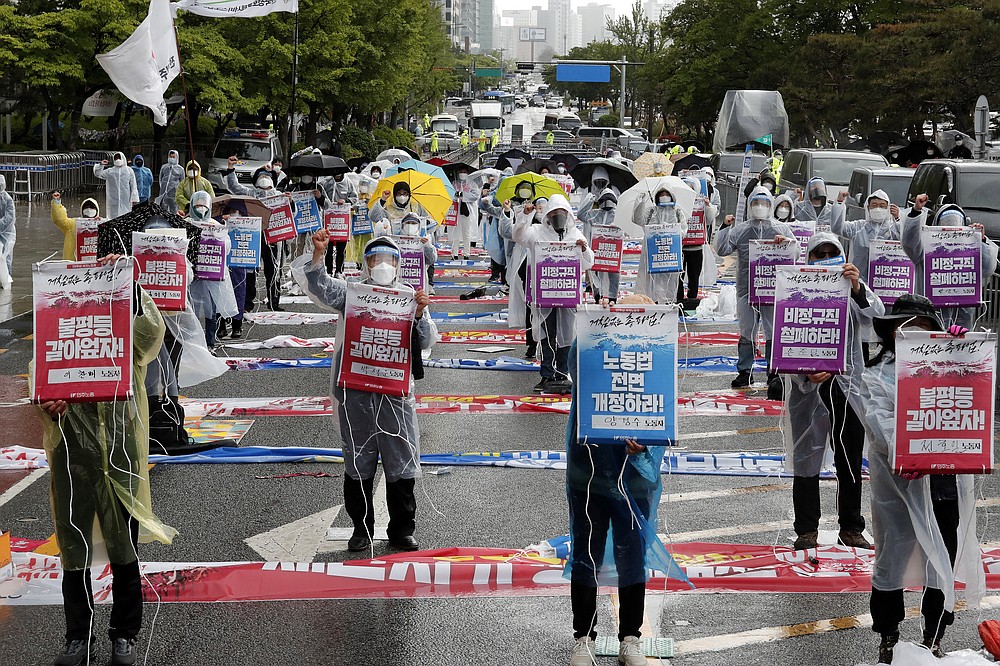 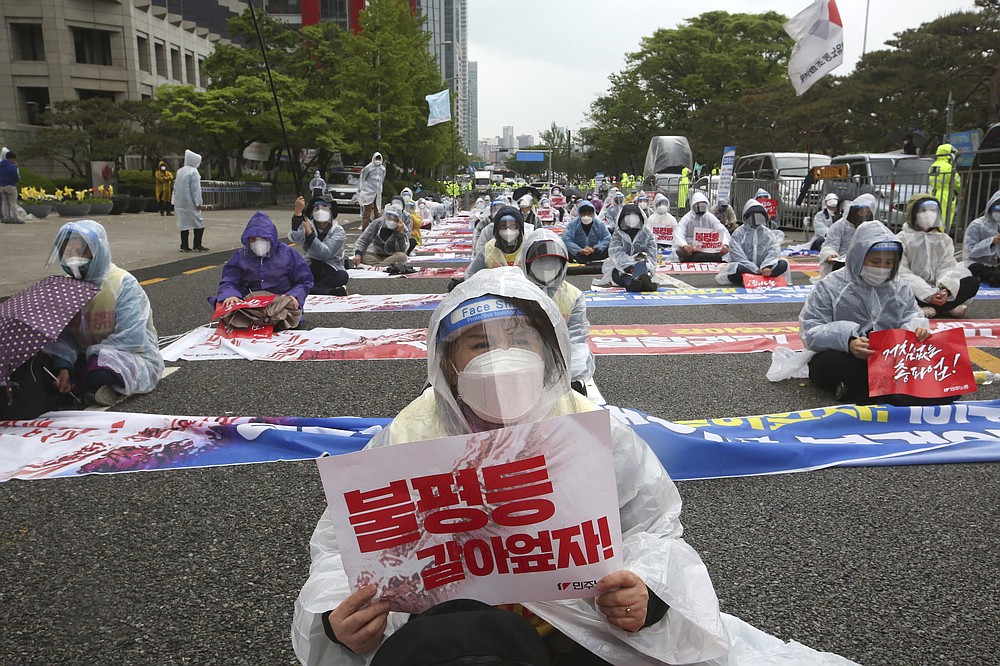 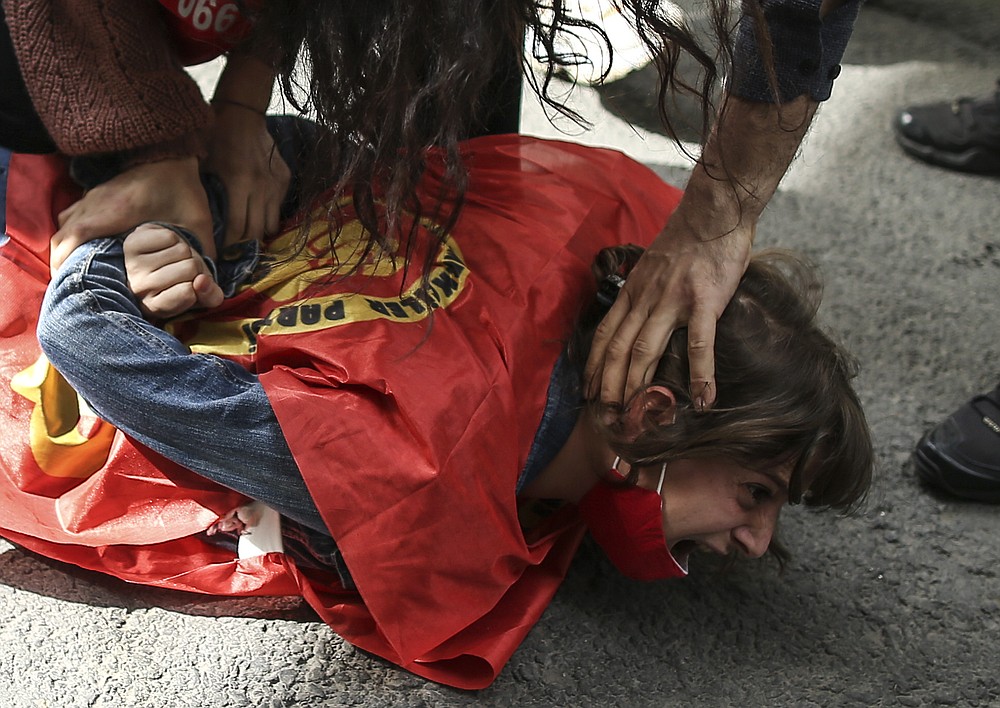 A protester reacts as police officers detain her after she and others tried to push through a police barricade towards Taksim Square in central Istanbul during May Day protests, Saturday, May 1, 2021. Police in Istanbul detained several demonstrators who tried to march toward Istanbul's symbolic Taksim Square in defiance of the protests ban and the strict lockdown imposed by the government due to the coronavirus outbreak. (AP Photo/Emrah Gurel) 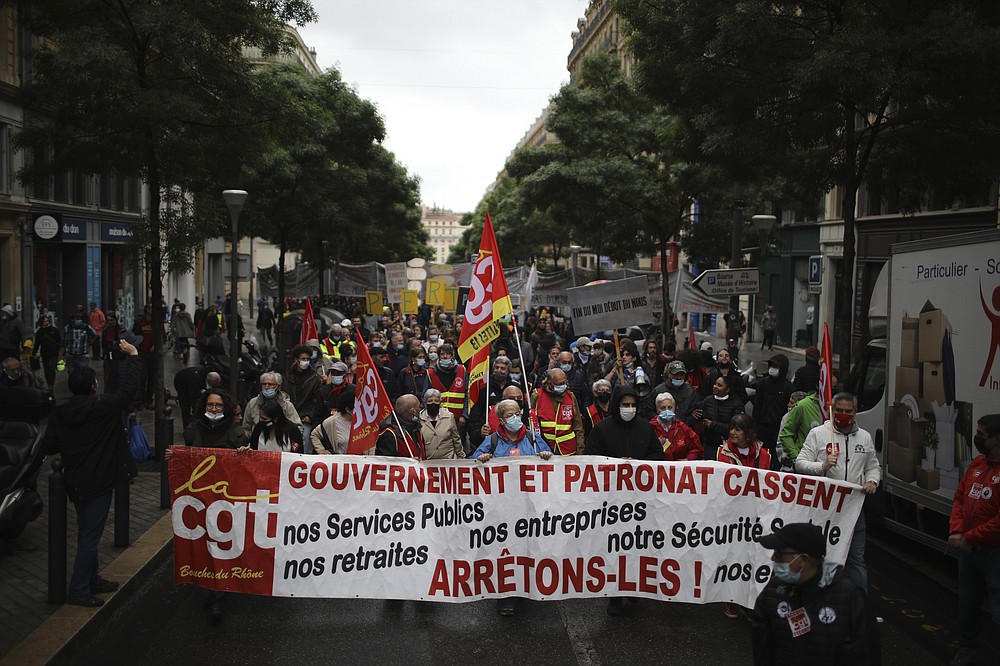 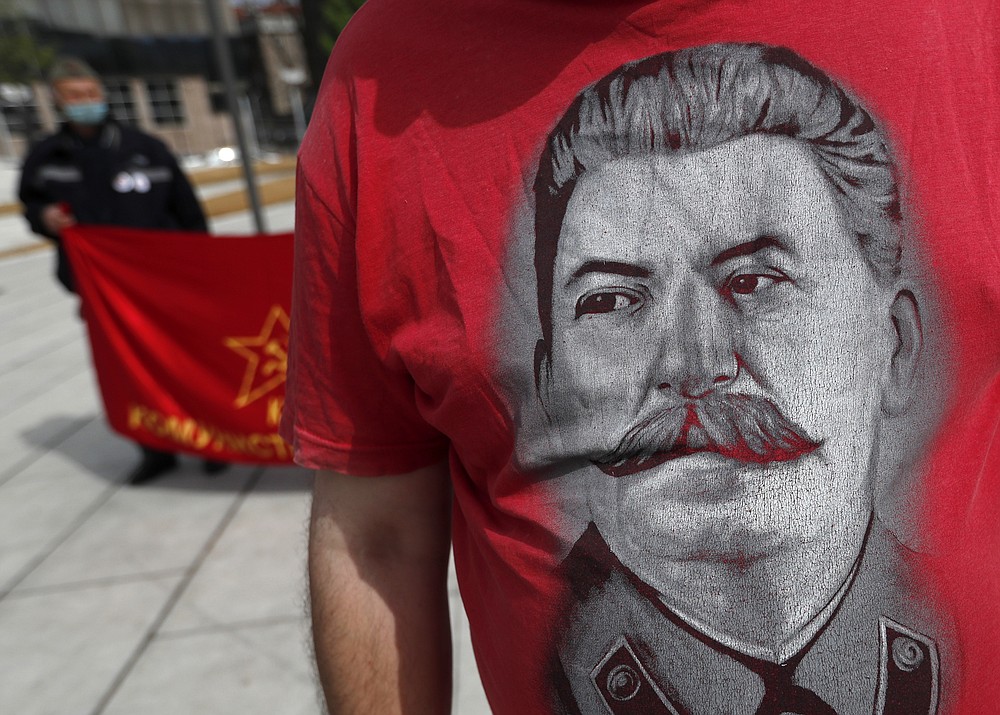 A man wearing a shirt with the image of former Soviet dictator Joseph Stalin attends a May Day rally on International Workers Day in Belgrade, Serbia, Saturday, May 1, 2021. Activists marked May Day with defiant rally. (AP Photo/Darko Vojinovic) 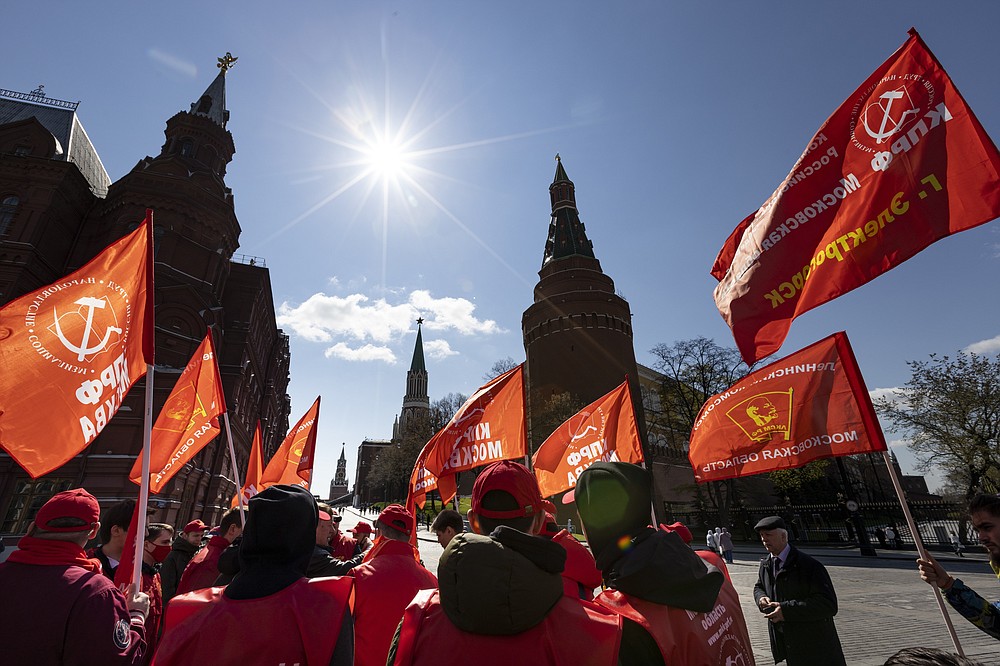