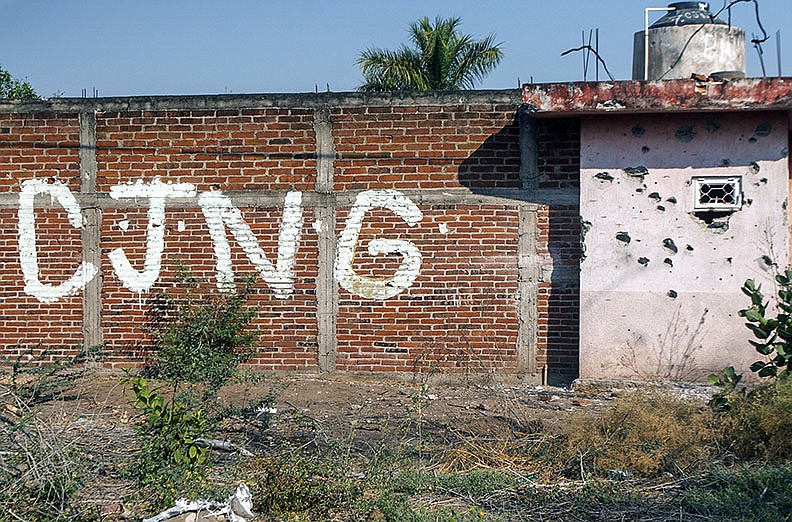 APATZINGAN, Mexico -- The town of Aguililla, deep in one of Mexico's most lawless regions, made news in early April when eight headless bodies were dumped there.

Weeks later, it is at war. Hardly anybody enters or leaves -- at least not without the permission of rival gangs that have blocked the roads.

In telephone interviews and in social media postings, trapped residents described a community living in terror of armed thugs who stroll the streets and shoot at one another. Some shops remain open, residents said, but the food supply is dwindling, and there is no access to hospitals.

"If the groups want to keep fighting among themselves, that's their problem," said Father Gilberto Vergara, the parish priest. "But this situation is suffocating us."

The priest has publicly called on the gangs to let townsfolk travel to the nearest city -- Apatzingan, a 2-hour drive northeast -- for food, medical care and gasoline, and to be able to sell their produce and cattle.

At the root of the mayhem is a struggle for control of a large segment of the narcotics trade in strife-ridden Michoacan state, and a government that has been powerless to prevent cartels from taking over large swaths of the nation.

In recent years, Aguililla, population 15,000, branched out from tomato farming, cattle ranching and marijuana cultivation to become a strategic hub for the manufacture of methamphetamine bound for the booming U.S. market.

Authorities say that dozens of illicit production facilities scattered in the nearby countryside process precursor chemical smuggled from Asia into the Pacific port of Lazaro Cardenas, 175 miles to the southwest.

Hundreds, if not thousands, of residents have fled the violence, some to the United States but many more to other parts of Mexico.

"I worked in Aguililla all my life. I have plots of tomatoes, corn, chile. ... But we had to leave it all behind out of fear," said Victor Arnoldo Aguaje, 68, who left in June with 14 relatives for Uruapan, the second-largest city in Michoacan.

"In Aguililla, one lives with a constant fear that you may be killed or kidnapped at any moment," he said.

The conflict demonstrates how gangs have infiltrated regional governance in much of Mexico. Authorities blame two cartels for the turmoil.

One, known as United Cartels, is a confederation of various mobs, including the Michoacan Family, the Knights Templars and Los Viagras, that U.S. prosecutors say is led by Adalberto Fructoso Comparan Rodriguez, 57, a former mayor of Aguililla.

He was arrested in Guatemala in March at U.S. behest for his alleged part in a scheme to smuggle more than 1,100 pounds of Mexican methamphetamine into Florida hidden inside concrete tiles and dissolved in five-gallon buckets of house paint.

The competing group is the Jalisco New Generation Cartel, one of Mexico's largest syndicates, known for its expansionist bent and lurid social media displays of armored vehicles and military-grade weaponry.

Its leader, Nemesio Oseguera Cervantes -- who is called El Mencho and once peddled heroin in bars in San Francisco -- is wanted in Mexico and the United States. He is reportedly a native of Aguililla.

"El Mencho wants to control the area where he grew up," said Mike Vigil, former head of international operations for the U.S. Drug Enforcement Administration. "It's part of his big plan to move into strategic areas where he can control various criminal activities."

Many in Aguililla are calling on the Mexican government to intervene.

"Of course we want the military to come and fight the criminals," Maribel Lopez, 53, a nurse, said by telephone. "Is it too much to ask that they at least open up the roads to Apatzingan?"

Her diabetic aunt died a few weeks ago because the roadblocks prevented relatives from getting her to the hospital, Lopez said.

There is a widespread belief in Aguililla that security services and the military collaborate with the cartels. Footage on social media showed townsfolk jeering Mexican national guard units as they retreated from the town.

A Mexican military base of 200 soldiers is situated in Aguililla, its troops resupplied by helicopter, but forces have avoided direct conflict with the warring gangsters.

A Pentagon official recently estimated that cartels control about one-third of Mexican territory. President Andres Manuel Lopez Obrador disputed that figure at a recent news conference but declined to provide his own.

For more than a decade, Mexico waged a "war on drugs" that led to tens of thousands of deaths but did little to weaken organized crime -- an approach that Lopez Obrador abandoned in favor of avoiding direct conflict while providing economic opportunities for poor youth to keep them out of gangs

But the strife in Aguililla is severely testing his strategy in the run-up the national midterm elections in June.

"The approach of the current administration to insecurity, to the whole armed conflict, has been silence," said Falko Ernst, a senior analyst in Mexico with the International Crisis Group, a nonprofit that researches conflict. "Their political calculation is that it's better not to talk about it."

Lopez Obrador has defended his decision to hold back from a military assault on Aguililla.

"If we take towns and use force, invade with police, with soldiers, well that will lead to nothing good," Lopez Obrador told reporters recently. "We have to call to everyone for serenity, for tranquility, to look for peace. No to violence."

In 2019, 14 state police officers were killed in an apparent cartel ambush in Aguililla. A state police unit dispatched to Aguililla in late April was attacked by at least one cartel drone armed with explosives. Authorities said two officers suffered minor injuries.

The president backed dialogue in hope of resolving the situation.

But Silvano Aureoles, the governor of Michoacan, said that a solution was elusive without the deployment of federal forces.

"One can dialogue with communities in conflict, with social groups, but to dialogue with criminals is another matter," Aureoles told Mexico's Milenio news outlet.

Not that his own efforts have fared any better.

The governor flew into Aguililla in a military helicopter in mid-April in a much-hyped display to show that security had improved.

Accompanied by heavily armed bodyguards, he was met by several protesters in the town's central square who hoisted handwritten signs demanding that authorities restore peace and open the roads. "I want to live free in my pueblo," read one placard.

"The people don't believe in the government -- we have no security or tranquility," said Fernando Padilla, 43, a teacher in Aguililla, who took his 10-year-old son to the protest.

"The government comes here to make a 'show,' says the situation is tranquil, but it's not true. ... We are at the mercy of the criminals, we are trapped here. This is not a life."

Video footage from the scene showed the governor approaching the protesters and shoving Padilla as security guards grabbed two of the protesters' signs.

After the shove went viral on social media, the governor asserted on Facebook that he had been confronted by hostile cartel "lookouts."

Padilla, who has been a teacher for 20 years in Aguililla, denied any links to drug traffickers.

The governor's characterization of the protesters as mob lookouts, he said, had put their lives in further danger. He said his salary was suspended after the incident -- a move he viewed as retaliation for his protest -- but was later restored when he complained to local press.

Ominously, Padilla said, armed men have been passing by his house.

"One doesn't know anymore if this is normal or whether these delinquents are coming for me," he said. "The people of Aguililla are stuck in a living hell, trapped and governed by criminality." 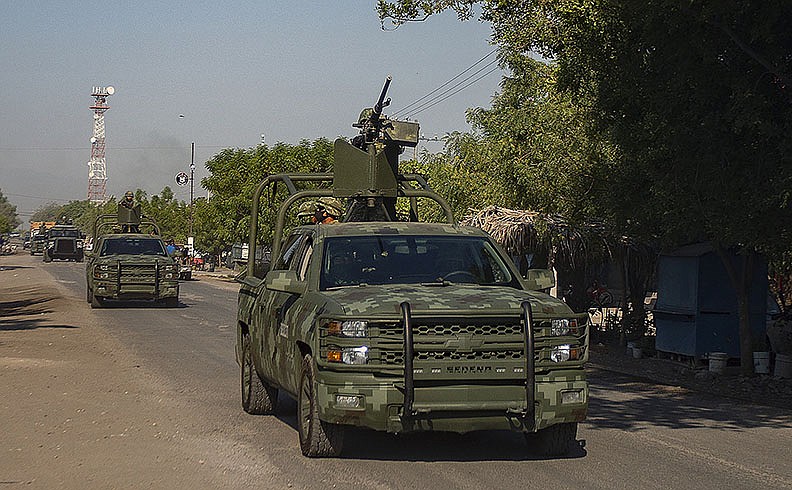 A convoy of vehicles from the Mexican Army patrols in Aguililla on April 23 during a visit by the Apostolic Nuncio Franco Coppola, the Vatican’s diplomat to Mexico. Attempts to maintain order in the town continue to be thwarted by drug cartels that control the area. (Tribune News Service/AFP/Getty/Enrique Castro)
ADVERTISEMENT