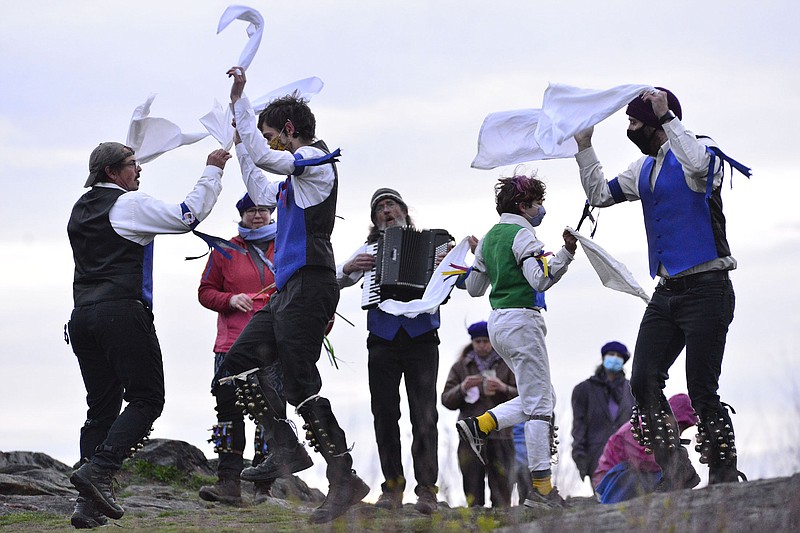 A small gathering Saturday welcomes the first sunrise in May with an impromptu Morris dance on top of Putney Mountain in Putney, Vt., a day after Vermont Gov. Phil Scott loosened covid-19 restrictions on outdoor gatherings. (AP/The Brattleboro Reformer/Kristopher Radder)

WASHINGTON -- Vaccination rates continue to lag across the U.S. for various reasons -- generational, religious and political.

Many unvaccinated young adults persist in asserting that even if they get the coronavirus, it is unlikely they will get seriously sick or die.

Such reluctance has inspired Republican West Virginia Gov. Jim Justice to offer $100 saving bonds to residents 16-35 who get or have gotten the shots -- trying to reverse a trend that saw his conservative state become an early leader in vaccination rates only to have it slow since.

And religious exemptions are facing particular scrutiny amid fears of new measles outbreaks as well as covid-19 cases -- and concerns that the growing number of families claiming such exemptions for their children are being swayed by scientifically discredited claims about the dangers of vaccines.

Also, reluctance is increasingly showing signs of political undertones, causing some Republicans to step up efforts to persuade their supporters to get vaccinated. At times their efforts even contradict information being spread by members of their own party.

Getting the shots is the best way to "end the government's restrictions on our freedoms," said U.S. Rep. Larry Bucshon, an Indiana Republican and heart surgeon who donned a white lab coat and stethoscope when he spoke into a camera for a recent public service announcement.

The announcement was the latest effort from GOP leaders to shrink the vaccination gap between their party and Democrats.

Mississippi has the nation's lowest vaccination rate, with less than 31% of its population receiving at least one shot. Next comes Alabama, Louisiana, Idaho and Wyoming, according to an Associated Press analysis of Centers for Disease Control and Prevention data. They all vote reliably Republican in presidential races.

By contrast, the five states with the highest vaccination rates supported Democrat Joe Biden in November. New Hampshire leads the nation with 60% of its population receiving at least one dose, followed by Massachusetts, Vermont and Connecticut.

The fifth-highest state, Maine, awarded three of its electoral votes to Biden and one to former President Donald Trump.

[Video not showing up above? Click here to watch » https://www.youtube.com/watch?v=KynW_WJhO2Q]

"Medicine and science and illness, that should not be political," said Dr. Brad Wenstrup, a Republican congressman from Ohio and a podiatrist who has personally administered coronavirus vaccine shots both as an Army Reserve officer and as an ordinary doctor. But last year "was an election year, and it really was."

Wenstrup said both parties helped foment some skepticism, though increasingly vocal moves by other Republicans amount to acknowledgement that GOP vaccine hesitancy is a growing public health problem that could have political ramifications.

"Things could easily spiral quickly if we don't solve this red-state-blue-state issue," said Kavita Patel, a physician and health policy expert who worked in the Obama administration.

Patel said life could return to normal in certain parts of the country while the pandemic continues to rage elsewhere -- potentially even disrupting in-person voting in primaries ahead of next year's midterm elections.

"We could be sitting here in the winter-fall with an entirely different, scary version of the pandemic," she said. "One driven by a combination of variants and people who didn't want to get vaccinated."

Hence last week's public service video, in which Texas Republican Rep. Michael Burgess, an obstetrician who reassured viewers that rather than rush the vaccine out in an unsafe fashion, federal officials "cut bureaucratic red tape, not corners. And they got the job done in record time." The video also credited the Trump administration's Operation Warp Speed with getting the vaccine so quickly.

Amid polling showing that Republican men were among the most likely vaccine holdouts, Senate Minority Leader Mitch McConnell said last month, "I can say as a Republican man, as soon as it was my turn, I took the vaccine." Even Trump, who was vaccinated privately while in office, suggested on Fox News Channel that he'd be willing to record a video urging vaccinations.

Still, not all Republican lawmakers feel the same sense of urgency to raise the vaccination rates.

"The science tells us that vaccines are 95% effective. So if you have a vaccine, quite honestly, what do you care if your neighbor has one or not?" Wisconsin Republican Sen. Ron Johnson said during a recent interview with a conservative radio host. "I mean, what is it to you?"

Between 70% and 85% of the population would need to be vaccinated before the coronavirus is effectively contained, experts say.

The GOP's top leaders have political incentives to appeal to those resistant to getting the shots. Joe Brettell, a GOP strategist in deep-red Texas, said he expects Republican governors looking to raise their profiles to seize on vaccine-related debates, such as opposing vaccine passports that may eventually be required for travel, even as they implore their states' people to get immunized.

"I think that's where smart governors are going to start asserting themselves," he said, noting that some already have.

Republican pollster Frank Luntz, who has been researching how best to convince vaccine skeptics, says he believes the effort is most effective when it avoids politics, with people hearing about the benefits of immunization from doctors, not politicians. He said many skeptics are persuaded to get the shot because it benefits their friends and family, not just themselves.

"If it's politicized, they will not reach herd immunity," said Luntz, who said that means giving credit to both sides, praising the Trump administration for Operation Warp Speed and the Biden White House's efficient and effective distribution of vaccines.

Luntz argued that public health officials should be targeting Republicans in much the same ways that national campaigns sought to win over holdouts among Black Americans and other minority groups.

"It's actually very tragic that appealing to Black Americans about the importance of staying safe is heroic, but appealing to Republicans, who have their own concerns, is considered political," Luntz said.

The Biden administration is working with community health officials, promoting the vaccine to skeptics through doctors and experts who don't have celebrity buzz but may be seen as more trustworthy. Biden suggested that might be a better way to reach diehard Trump supporters than a video from the former president.

A law adopted in Connecticut last week adds momentum to the push to strengthen vaccination requirements for schoolchildren, but efforts to give families more leeway are brewing in statehouses around the country in debates that go back more than a century.

The arguments over mandates, and when to allow exceptions, are expected to become more heated as authorities decide what expectations should be for covid-19 vaccinations once they are approved for young children.

Leaders of Islam, Judaism and major Christian religions say vaccination is consistent with their belief systems.

"The truth is there is no major religion that prohibits vaccinations," said Peter Hotez, dean of the National School of Tropical Medicine at Baylor College of Medicine. "The argument has really very little to do with religion and everything to do with the anti-vaccine, vaccine-choice movement."

But proposals to expand or limit immunization exemptions pop up every year in state legislatures, although it's rare for any to win passage. Nationwide, the National Conference of State Legislatures is tracking about 270 bills related to childhood immunizations.

The debates often do not break down along traditional political divides, said Robert Bednarczyk, a professor at Emory University's Rollins School of Public Health.

"I do think when you see vaccine refusal, it really does run across the population," he said. "Regardless of the reason, the endpoint is always the same: It's children that are being left unprotected from infectious diseases."

For as long as there have been vaccination requirements, there has been pushback.

In Massachusetts, a Lutheran minister in 1902 refused to comply with a mandate by the Cambridge Board of Health for all adults to get smallpox vaccinations. The U.S. Supreme Court in 1905 upheld the state's mandatory policy, and in 1922 upheld a school system's power to refuse admission to students who failed to heed a vaccination order.

Meanwhile, Saturday marked the end of a pandemic era in the air: no more social distancing on flights.

Delta was the final holdout, ending its practice of blocking middle seats. That is more than a year after the airline introduced the practice as the coronavirus severely curtailed the number of air travelers.

Other major U.S. carriers have long since returned to full flights. American and United starting selling all of their seats last summer. Southwest started doing so in December, and Alaska Airlines and JetBlue followed in January.

Delta announced at the end of March that it would make all seats available for flights starting May 1. One key factor, chief executive Ed Bastian said, was that the airline believed nearly 65% of those who flew with Delta in 2019 expected to have at least one dose of a vaccine by the beginning of May.

"While Delta's decision to block middle seats has given many customers a reason to choose Delta over the past year, the signature hospitality of our employees and the experiences they deliver to customers every day have also deepened their trust in our airline," Bastian said in a statement.

During an earnings call in mid-April, Bastian said the change would provide "a powerful tool for improving our financial performance."

The change comes as air travel continues to rebound over last year's numbers. The number of passengers screened by the Transportation Security Administration has topped 1 million every day since March 11. At the lowest point during the same stretch last year, TSA screened fewer than 88,000 passengers.

As they have packed their planes full again, airlines have pointed to an industry-funded study released last fall highlighting the relative safety of flying if precautions like constant masking and sanitizing are in place. A study in mid-April from the CDC found that social distancing on planes was beneficial, but industry experts said they did not expect airlines to change their policies.

Information for this article was contributed by Will Weissert, Dave Collins, David Crary, Michael Melia and Mike Stobbe of The Associated Press; and by Hannah Sampson of The Washington Post. 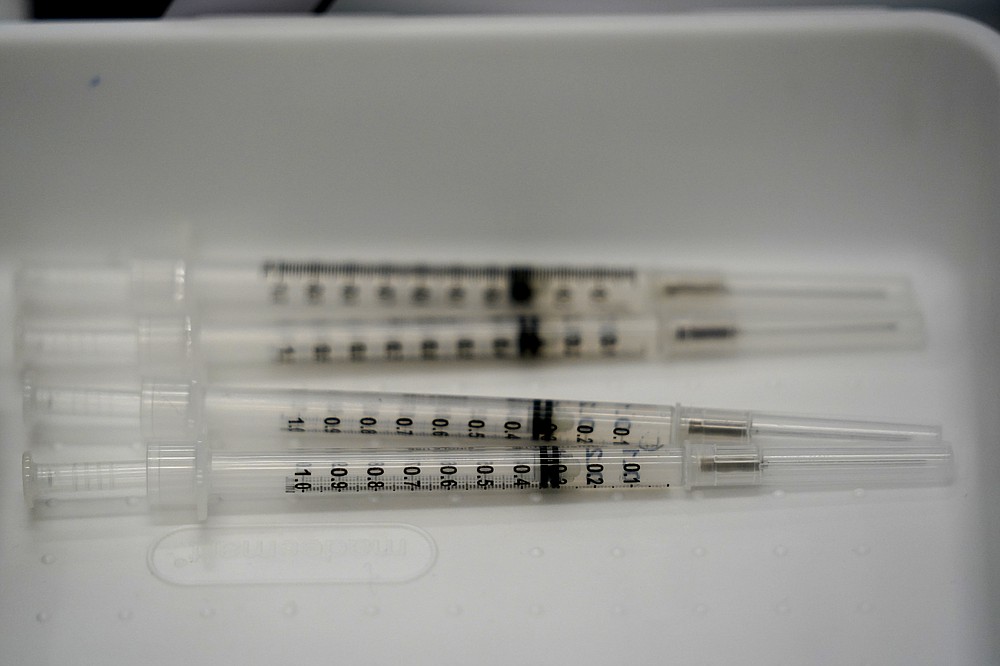 FILE - This April 15, 2021, file photo syringes filled with the Pfizer COVID-19 vaccine are shown at the Christine E. Lynn Rehabilitation center in Jackson Memorial hospital in Miami. With vaccination rates lagging in red states, Republican leaders have begun stepping up efforts to persuade their supporters to get the shot, at times combating misinformation spread by some of their own. (AP Photo/Wilfredo Lee, File)
ADVERTISEMENT