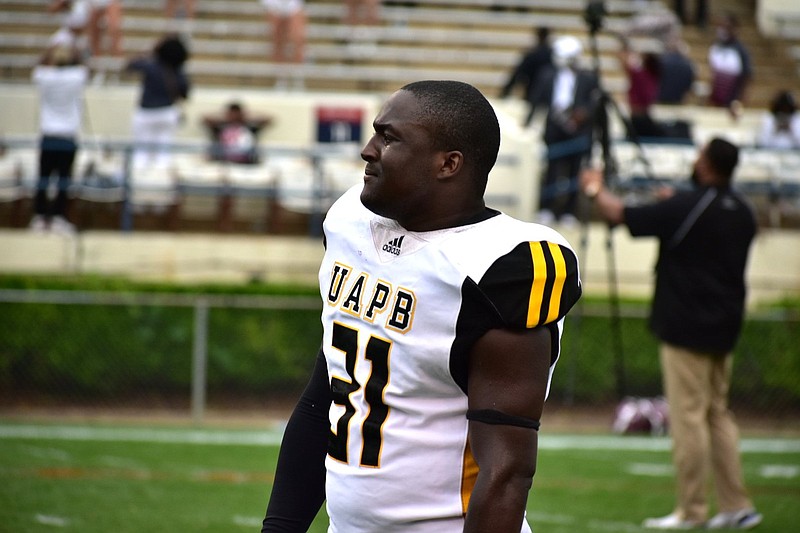 JACKSON, Miss. -- Alabama A&M didn't need much help Saturday afternoon in the Southwestern Athletic Conference title game, but the Bulldogs got it anyway.

The University of Arkansas at Pine Bluff committed a season-high 13 penalties for a whopping 139 yards. Those miscues made it tough on the Golden Lions, who suffered a 40-33 loss to Alabama A&M at Mississippi Veterans Memorial Stadium.

Prior to Saturday's game, UAPB's previous high for penalties was the 11 the Golden Lions drew against Prairie View A&M in a 36-31 victory on April 17 that clinched their spot in the championship final. The most penalty yardage the Golden Lions had accumulated was 97 when they came back to beat Mississippi Valley State 24-17 on April 3.

UAPB easily eclipsed both of those marks on the first day of May.

UAPB Coach Doc Gamble pointed to a litany of things that stunted his team's chances at winning their second outright SWAC title. Yet, the Golden Lions were their worst enemy against the Bulldogs.

UAPB was flagged eight times in the second half alone. The final tally may not have come as a surprise to some. The Golden Lions ranked last in the SWAC in penalties just ahead of Alabama A&M, which had six penalties for 55 yards.

It was the timing of those calls that made things tough to swallow for UAPB.

"Just too many of them," UAPB wide receiver Harry Ballard said of his team's penalties. "I wish we'd executed a little better. We came out aggressive like always, we just had too many mistakes."

Many of UAPB's penalties kept drives alive for Alabama A&M. For example, a pass interference call against a Golden Lions' defensive back helped prolong a Bulldogs' march late in the third quarter that eventually gave them a 32-26 lead. Even more notable, the Golden Lions were flagged four times on Alabama A&M's lone scoring drive of the fourth quarter, which turned out to be huge because it gave the Bulldogs enough of a margin to hold on.

While some penalties allowed Alabama A&M to continue to move down field, others came at inopportune times when UAPB was on offense.

Gamble mentioned afterward that some of the penalties could be attributed to his team being overly excited at times. He also admitted that he didn't agree with a few of the calls that were made, either.