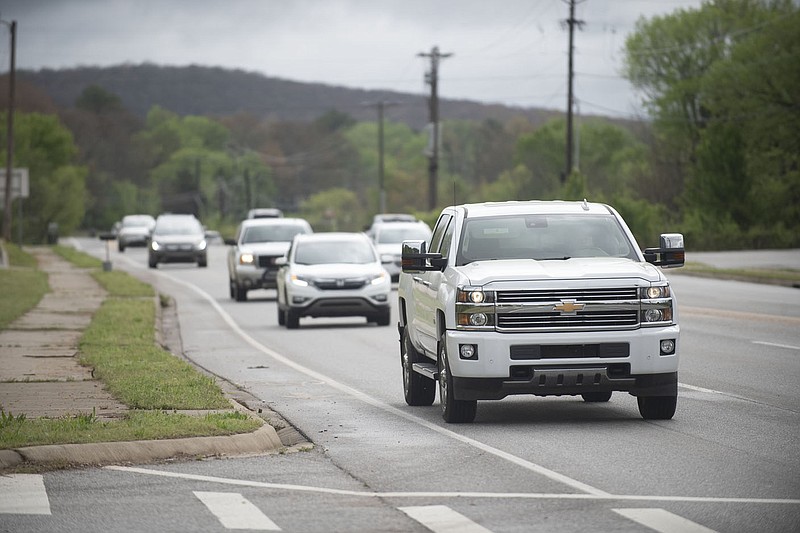 Traffic flows Thursday April 29, 2021 on Arkansas 16 near Stone Bridge Rd. The Arkansas Department of Transportation has completed a study of Arkansas 16 and is recommending widening the road to four lanes, in four phases, from Stone Bridge Road in Fayetteville to the intersection with Arkansas 74 in Elkins. Arkansas 16 provides one of the only Middle Fork White River crossings in the general area south of Lake Sequoyah, according to the study. The total estimated cost of the improvements would be about $45.2 million, in 2020 dollars, of which about $29 million would be construction costs. The total cost includes preliminary engineering, right-of-way acquisition, utilities relocation, construction, and construction engineering.Visit nwaonline.com/210430Daily/ and nwadg.com/photo. (NWA Democrat-Gazette/J.T. Wampler)

Elkins residents and other travelers east of Fayetteville will likely be driving on a widened, less congested Arkansas 16 within the next few years, according to state highway officials.

The Arkansas Department of Transportation has completed a study of the road and is recommending widening to four lanes, in four phases, from Stone Bridge Road in Fayetteville to the intersection with Arkansas 74 in Elkins. Beyond Elkins, Arkansas 16 connects with Arkansas 23, otherwise known as the Pig Trail Scenic Byway, a popular route through the Ozarks.

Estimated cost of the improvements is $45.2 million, in 2020 dollars, of which about $29 million would be construction costs. The full cost includes preliminary engineering, right of way acquisition, utility relocation, construction and construction engineering.

"Highway 16 traffic operations, between Stone Bridge Road and Highway 74, are at or approaching unacceptable levels and will worsen in the future," according to the study. "Highway 16 serves as the primary route between Elkins and Fayetteville. Since most Elkins residents work to the west, traffic heavily favors one direction during peak periods, resulting in travel delays."

The Arkansas Highway Commission has adopted the study to use as a planning guide for improvement of Arkansas 16.

Abby Curlee, who lives just off Arkansas 16 east of Lake Sequoyah, said earlier work that widened the highway on the outskirts of Fayetteville helped, but traffic still backs up every morning and evening. If there's a wreck on the two-lane portion, everything can come to a standstill, she said.

"It is very congested. There is so much traffic out there, it'll be good to have a little extra moving room," Curlee said. "Getting out on the road is a challenge. Everybody's going the same direction, and they're bumper to bumper, practically."

U.S. Census Bureau data indicates more than 85% of Elkins' working population commutes toward Fayetteville, making the ability to access jobs crucial to those residents, according to the study.

Elkins Mayor Bruce Ledford said his city is expanding rapidly, and the road, which he actually helped build in his first job out of high school in the early 1960s, has not kept pace with the growth.

Ledford said the city has expanded its water and sewer systems in anticipation of hundreds of new residents, and the road needs to be improved as well.

"The traffic has exceeded all expectations out here," Ledford said. "We have 240 houses waiting here in a subdivision to be built."

He said traffic typically backs up weekday mornings from the traffic signal at Crossover Road all the way to the Baldwin Community as commuters try to get through the intersection.

Elkins Police Chief Bryan Watts said he hoped the road would be widened all the way through the city. Elkins schools are on both sides of the highway and widening would allow for turn lanes to be added. Turn lanes would make it safer for people dropping their kids off and would alleviate some of the school-related traffic congestion, he said.

Two other tracts of land are also targeted for residential development, Watts said.

"So, we're going to see even more people in Elkins and all on Highway 16," he said.

"There certainly are some safety concerns out there with the two-lane traffic and the relatively high speeds. There are some rear-end accidents that occur, and, as development continues to occur and traffic picks up, that's going to continue," Brown said. "I think it's a good project. I think it's probably more beneficial for commuters coming into town than anything else, but as traffic increases the safety concerns increase out there as well."

The bicycle and pedestrian plans from Fayetteville and the Northwest Arkansas Regional Planning Commission show an on-street bicycle path along Highway 16 within the Fayetteville city limits, according to the study. City plans show the St. Paul Trail being extended across the West Fork of the White River to connect to Dead Horse Mountain Road, which will serve the Highway 16 area. The study says these plans should be consulted as projects along Highway 16 are designed.

The study recommends a median, either a center turn lane or a raised divided median with breaks at select intersections. The four-lane undivided sections already constructed should be retained, particularly in floodplains where adjacent land development is limited, according to the study.

Limiting where cars can enter the roadway should be considered as a part of any Arkansas 16 project and should be coordinated with the cities, according to the study.

Department officials are also recommending partnering with local jurisdictions, if possible. Giving the road to the cities of Fayetteville and Elkins to maintain when complete should be considered, according to the study.

Work on Arkansas 16 in recent years has included widening the road in 2015 to four lanes, with bike lanes, between Armstrong Road and Stone Bridge Road and replacing the bridge over the West Fork of the White River to accommodate four lanes of traffic. In 2017, the bridge over the Middle Fork of the White River was replaced with a widened structure and new asphalt was laid on the road. 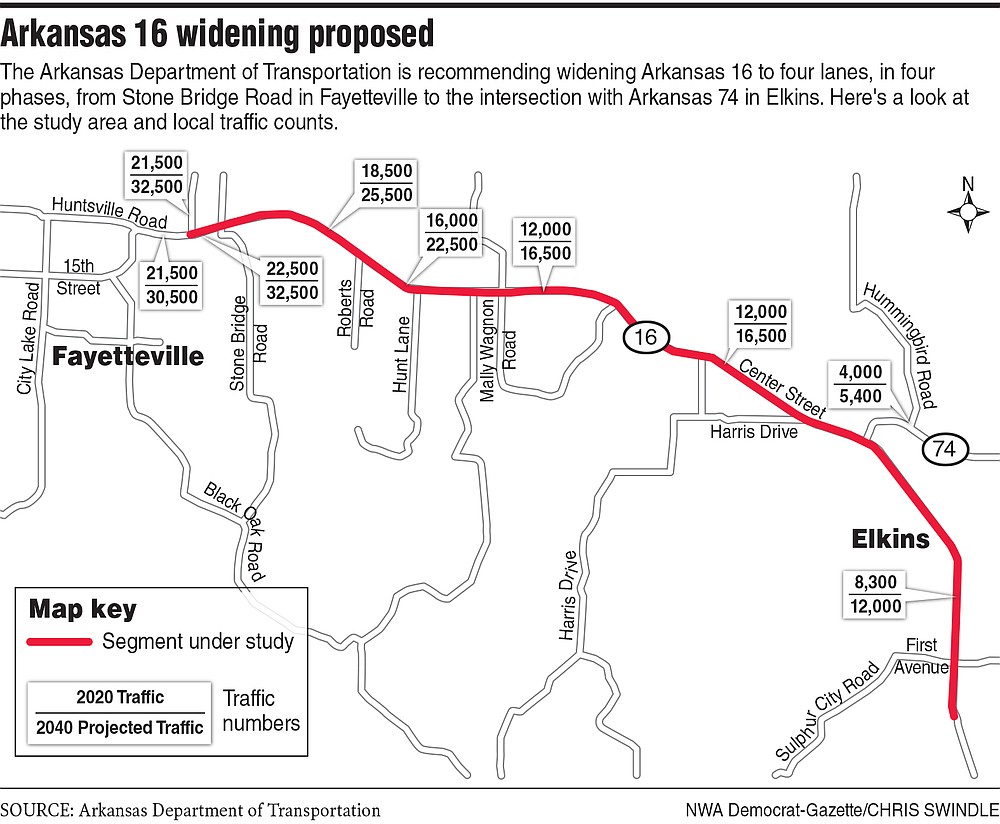