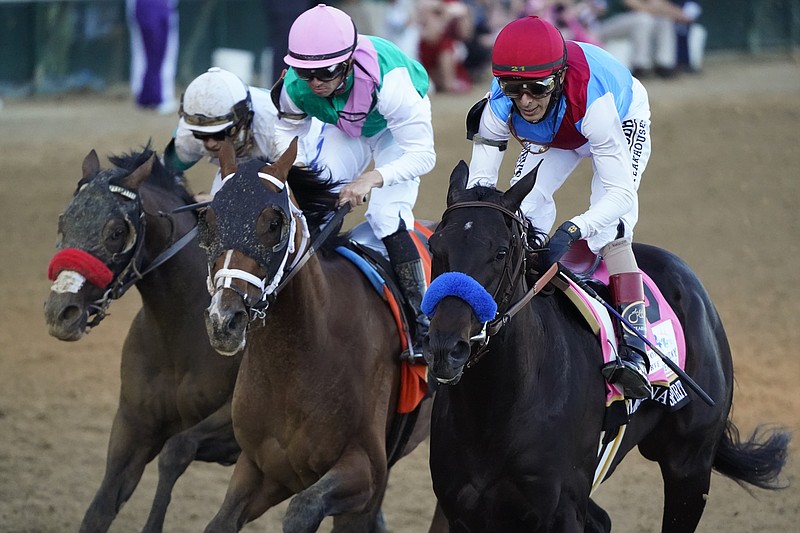 LOUISVILLE, Ky. -- Medina Spirit's surprising Kentucky Derby victory gave Bob Baffert a good problem to have -- figuring out where to hang another sign on his barn's already crowded wall of glory.

As the Hall of Fame trainer digests a record seventh Derby win that caught even him off guard, he and the horse's connections must determine whether the dark brown colt will turn around quickly for the 146th Preakness on May 15 in Baltimore, where a collection of rested horses and revenge-minded competitors await.

"He came out of it well," Baffert said Sunday morning at Churchill Downs. "It takes about a week to determine, so I'm going to come back next weekend and see. I don't see anything that would discourage me right now."

Similar wait-and-see decisions loomed on the backside a day after the 147th Derby returned to its traditional first Saturday in May date.

Shorter than the Derby at 1 3/16 miles, the Preakness sets up well for horses that skipped Churchill Downs for the sprint at Pimlico Race Course. Not to mention a chance for redemption for competitors that fell short to Medina Spirit.

Trainer Doug O'Neill said third-place finisher Hot Rod Charlie would not be among them, looking instead to run the 1 1/2-mile Belmont Stakes on June 5 in New York.

Meanwhile, Brad Cox planned to talk with connections for runner-up Mandaloun and 5-2 Derby favorite Essential Quality, who finished fourth. Though disappointed not to win in his first Derby, the Louisville-born trainer was encouraged by both finishing in the top four of the 19-horse field.

After a head-scratching sixth in the Louisiana Derby, Mandaloun provided a pleasant surprise on Saturday by chasing Medina Spirit down the stretch before falling half a length short. Cox insisted Essential Quality was the Derby's best horse and just created extra distance for himself in the turns trying to contend.

"He ran a huge race, very proud of his effort, he and Mandaloun," Cox said. "He was fourth best at a mile and a quarter. He lost a lot of ground around both turns."

Asked if he desired to run the Preakness, Cox said: "I have a desire if I feel like my horses are doing really well. I just really have to base it off of them."

Baffert might throw another one of his pupils into the Preakness mix.

He preceded his availability with reporters by working a couple of horses including Concert Tour, who finished third in the Arkansas Derby. A decision by owners Gary and Mary West looms for the colt with three wins.

In the meantime, Baffert basked in the afterglow of Medina Spirit's biggest victory.

His lone Derby entrant was somewhat under the radar at 12-1 odds following consecutive second-place finishes, including one against Rock Your World in the Santa Anita Derby. Medina Spirit quickly set the line behind him and didn't relent despite pressure, covering the 1 1/4 miles in 2:01.02.

The two-time Triple Crown winner was careful not to make any projections about his latest Derby champ, whom he briefly paraded in front of a gathering outside his barn. Baffert then led him inside for a well-deserved rest before his next chapter.

"It was just a thrill to watch him do it and fight on," Baffert said. "He came back, he's handling it quite well. He wasn't as tired as I thought he might be. A big race like that, but he handled it quite well." 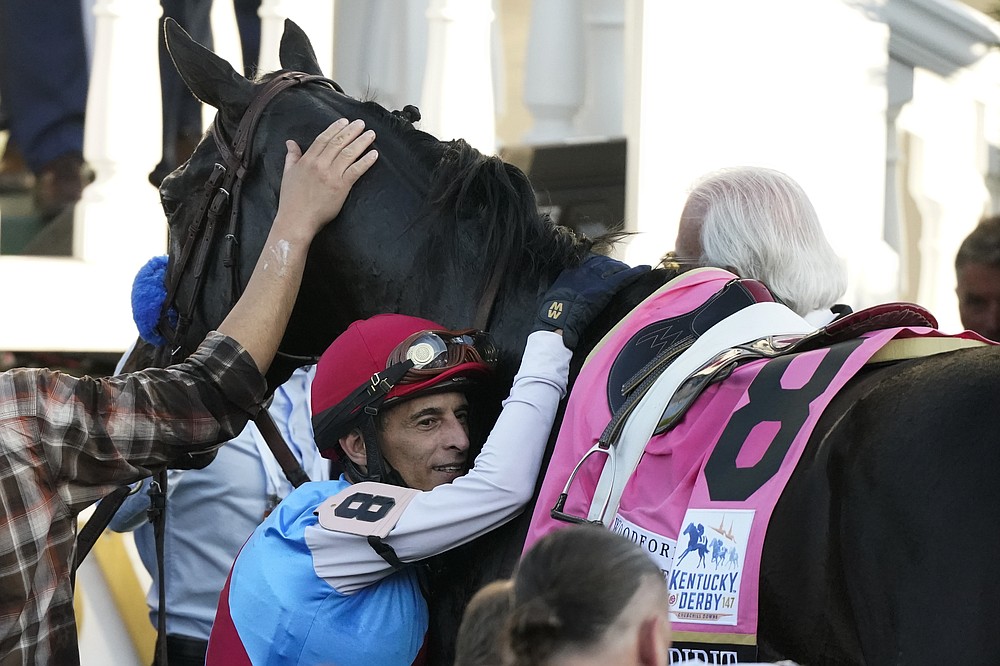 Jockey John Velazquez hugs Medina Spirit in the winner's circle after winning the 147th running of the Kentucky Derby at Churchill Downs, Saturday, May 1, 2021, in Louisville, Ky. (AP Photo/Jeff Roberson) 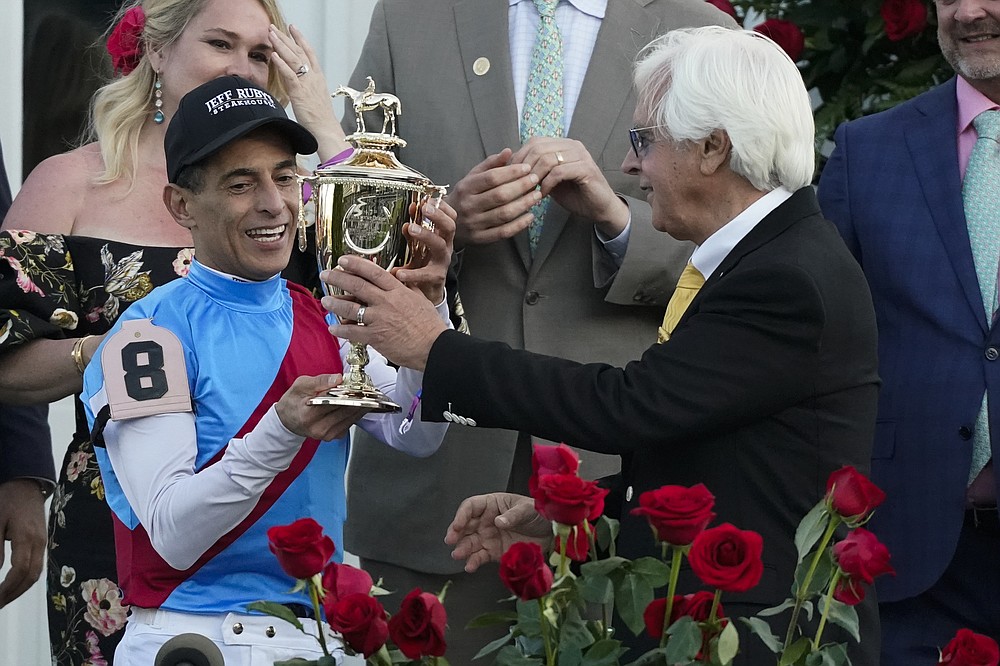 Trainer Bob Baffert hands the winner's trophy to jockey John Velazquez after they victory with Medina Spirit in the 147th running of the Kentucky Derby at Churchill Downs, Saturday, May 1, 2021, in Louisville, Ky. (AP Photo/Jeff Roberson)
ADVERTISEMENT