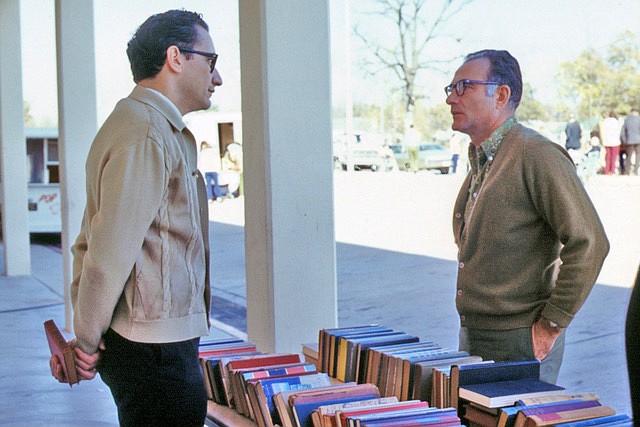 Edmond Freeman, former publisher of The Pine Bluff Commercial, died Monday morning at the age of 94.

A Naval Academy graduate, he worked in the family business of publishing The Commercial and held the top position until the sale of the newspaper in 1986. Freeman passed away at his Little Rock home surrounded by family, said Alan Silverman, his son-in-law. Freeman had battled cancer in recent years.

Freeman’s great-grandfather founded The Commercial in 1881. Edmond went into the business in the early 1950s as a reporter, after returning to Pine Bluff from studying philosophy at the University of Chicago, where he met his wife June.

Edmond and his brother Armistead assumed leadership of The Commercial from their father Wroe around the year 1960.

Greenberg, who was The Commercial’s editorial page editor for 30 years, died April 6 at age 84.

“My dad was profoundly saddened by Paul’s death,” said Gretchen Freeman, the second of Edmond and June’s four children. “[Greenberg] was very important to him. They worked together side-by-side for many years.”

Editorials were very important to Edmond because they gave The Commercial a voice of leadership for Pine Bluff and Southeast Arkansas, according to Foreman, who led the newsroom from 1963-68.

“Ed stood for high standards and ethical integrity,” said Foreman, who retired as a journalism professor at Pennsylvania State University in 2006. “I stood for the same things. I think that’s how we got to be good friends. We had a true friendship that persisted as the years went on.”

Arkansas Business editor Gwen Moritz was hired at The Commercial during Edmond’s latter years as publisher. She recalled a “very vibrant” newsroom under his leadership, which included separate city and regional desks that carried high news value and high standards.

“He was a friendly employer,” Moritz said. “He and his brother were old-school family newspaper people who felt a responsibility to the community, especially June. She was more involved in the community than Ed.”

Born May 31, 1926 in Pine Bluff, Edmond Wroe Freeman III spent a year at The Citadel, The Military College of South Carolina before going into the U.S. Naval Academy, where he was an accomplished gymnast and graduated in 1947.

He was a commissioned officer on an aircraft carrier and later enrolled at the University of Chicago to pursue a Ph.D. He did not complete the degree, but returned to Pine Bluff after marrying fellow U.C. doctoral candidate June Biber on June 11, 1950.

“My father supported the publication of editorials that strongly condemned segregation,” she said.

Greenberg’s passing took a toll on Edmond, who Gretchen recalled saying, “I guess we’re going out together.”

Under Edmond’s leadership, The Commercial also campaigned to help keep the Buffalo River in its natural state and prevent a dam from being constructed in the 1960s and 1970s. Congress designated the Buffalo a national river in 1972.

The Freeman family sold The Commercial to Donrey Media Group in late 1986. The Commercial is now owned by WEHCO Media Inc. and published as part of the Arkansas Democrat-Gazette.

David Freeman, one of Edmond’s sons and science bureau chief of the Wall Street Journal, said his father owned a wide library of books that showed his wide range of thinking.

“He lived an amazing life,” David said. “He sustained himself by enjoying conversations with people. He loved to talk about ideas. He was a great reader and talker and probably the world’s greatest listener. He was always eager to talk to people.”

A memorial service will be held at a later date.

“He was a very honorable person with a strong ethical streak and a lot of integrity,” Gretchen said. “He was one of a kind. He loved education. He educated all of his children and helped with educating all of his grandchildren. He had an incredible memory and could recite all the words to every stanza of many poems he read.”