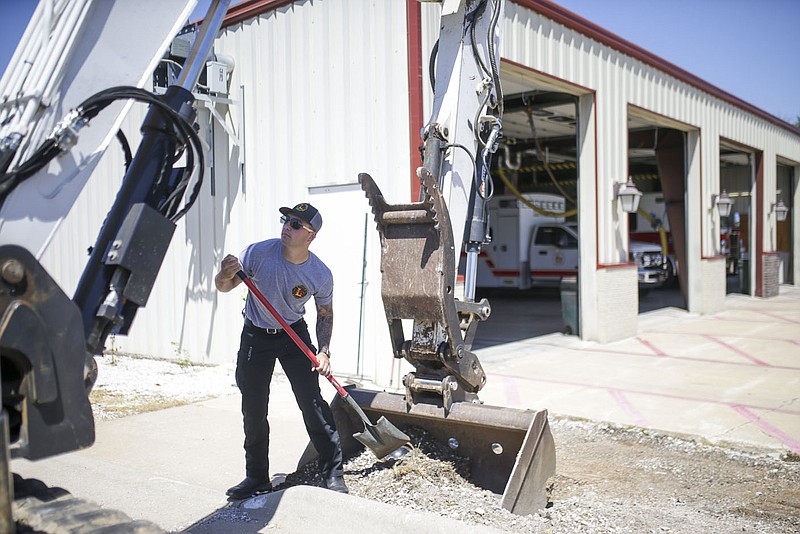 Firefighter and EMT Dakota Stacey shovels gravel for a landscaping project, Friday, April 30, 2021 at the Lowell Fire Department in Lowell. Lowell will hold a special election May 10 for voters to extend a current 1 cent sales tax which funds about 70 percent of the city's operating budget. A bulk of the money goes to the fire department, police department and roads. Check out nwaonline.com/210501Daily/ for today's photo gallery. (NWA Democrat-Gazette/Charlie Kaijo)

LOWELL -- Residents will go to the polls starting today to determine if the city will extend its 1-cent sales tax.

Early voting starts today, and election day is May 11.

Customers in Lowell's stores, restaurants and industries will not pay more at the cash register or notice a difference if the measure passes, said Jerry Hudlow, the city's finance manager.

But residents and those who travel to Lowell for work will notice if the measure doesn't pass, Hudlow said.

"There would have to be a significant cut in services. It's a $2.5 million hit. It would be quite disturbing," he said.

The city expects about $2.5 million a year from the tax awaiting renewal, Hudlow said. Half of that goes to the city's general fund and half to the city's street fund.

Lowell residents voted in 2011 to extend for 10 years a 1-cent sales tax. Those 10 years have passed, and city officials have asked residents to continue it.

This 1-cent sales tax pays a significant part of the budgets for the Police and Fire departments, which make up roughly 70% of the city's general fund spending, Hudlow said. The tax also provides for street, sidewalk and drainage improvements.

"Anytime you look at a special sales tax and putting it up for a vote, the people choose to tax themselves," said Steve Cox, senior vice president for economic development for the Rogers-Lowell Area Chamber of Commerce. "It's for public safety -- things like fire engines and police cars -- as well as parks and roads. It's really more of an investment."

Northwest Arkansas cities large and small in the past few years proposed sales tax extensions to voters, and the measures passed overwhelmingly.

Not Lowell, Hudlow said. That city chooses to "pay as you go." The city saves the money and finds grant money to pay part of the cost, he said.

"We're frugal," Hudlow continued. "We have a money plan that looks ahead.

"I treat this money and what I do here just like it was my business. I ask my department heads, 'If this was your business, would you spend your money for this?'

"And it is their money because we all pay taxes."

A shopper in Lowell pays a basic 9.5% sales tax on items, Hudlow said. That includes 6.5% state tax, a 1-cent county tax and 2 cents in city tax. A 2% advertising and promotion tax is added to some purchases.

Other sources of revenue for the city include fines and fees at $1,225,300; property taxes, $987,000; as well as various amounts from state turnback, franchise taxes, donations and grants and income investment.

"We're a small, small town, with a lot of folks here during the daytime," Hudlow said. "And we've got to provide services to those folks during the day."

But companies with offices, warehouses and manufacturing plants in the city draw thousands of employees. The city boasts of J.B. Hunt Transport Services, Federal Express and Central States Manufacturing in the city. Arvest Bank keeps its operations center in the city, and Tyson Foods has its employment center there.

Cox expects the city to grow, especially with development of the west side of town. Lowell's neighbors, Springdale and Cave Springs, also are working to handle growth west of Interstate 49.

Cox noted the expansion of the Dick Trammel Highway (Arkansas 265) could attract commercial and industrial development in the east -- and more people to support the city through sales taxes.

Lowell, like other cities in Northwest Arkansas, has seen its sales tax receipts grow to record levels. For example, the amount of taxes collected in February was up 70% from February 2020, Hudlow said. February 2021 tax receipts were $520,000.

"People are staying at home, and they are purchasing things closer to home," Hudlow said.

And sales taxes paid at the point of delivery from online ordering have helped, he said.

Lowell has made several recent improvements with the money in its general fund, Hudlow said.

Parents picking up their children from Lowell Elementary School now have a designated traffic lane thanks to the city. And an upgrade of Lowell Park is nearing completion.

Hudlow said the city built a fire department and added equipment which helped the department in 2020 achieve a Class 2 rating with the Insurance Service Office. The department's 29 firefighters took on additional training to prepare for the insurance office's audit and strive to arrive in four minutes to any address in the city, said Chief Pete Melnicki.

Hudlow said the city has signed a contract for engineering and design of a new police station. But he said any construction is a few years out.

The city also hopes to extend East Monroe Avenue from Bloomington Street to South Old Wire Avenue to provide a direct route through the city from Interstate 49.

McCool said he doesn't think his city is lacking or needing any specific infrastructure.

"But it's just better if the city has the money, if necessary," he said.

The tax is needed, Hudlow said.

"It's helping us make progress in Lowell, and it will allow us to continue to do that," he said. 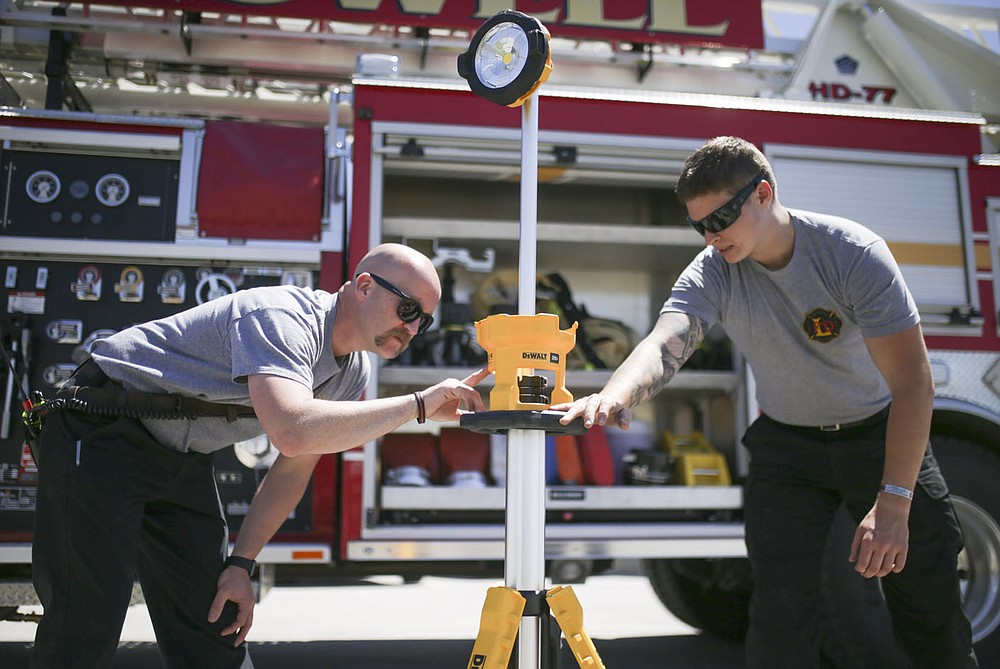 Firefighter and driver Stephen Magner (from left) and firefighter Hayden Johnson inspect a scene light, Friday, April 30, 2021 at the Lowell Fire Department in Lowell. Lowell will hold a special election May 10 for voters to extend a current 1 cent sales tax which funds about 70 percent of the city's operating budget. A bulk of the money goes to the fire department, police department and roads. Check out nwaonline.com/210501Daily/ for today's photo gallery. (NWA Democrat-Gazette/Charlie Kaijo) 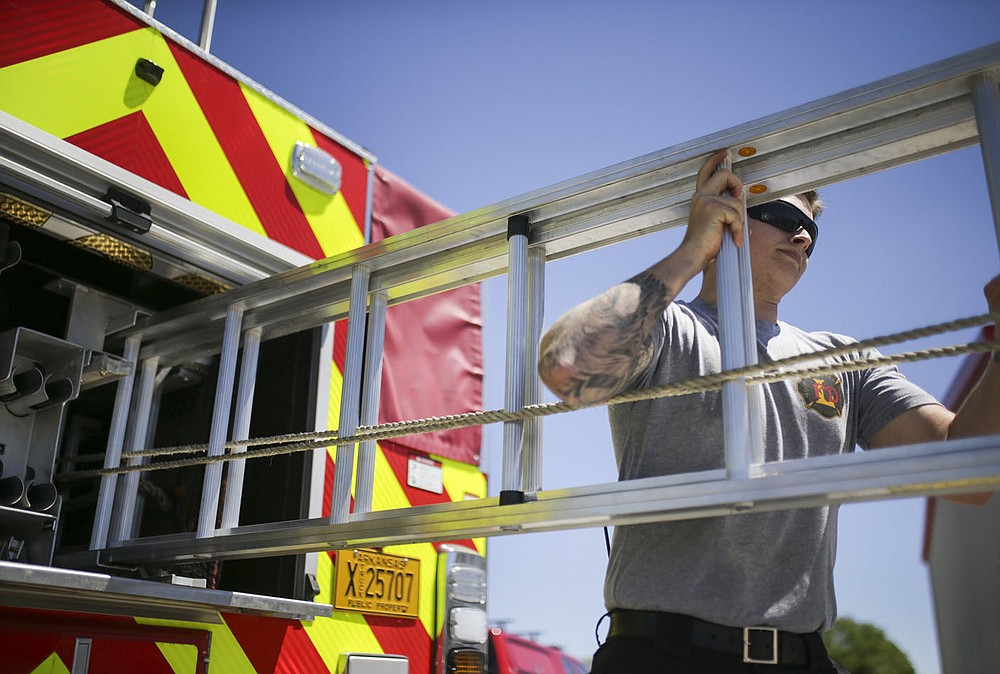 Firefighter Hayden Johnson inspects a ladder, Friday, April 30, 2021 at the Lowell Fire Department in Lowell. Lowell will hold a special election May 10 for voters to extend a current 1 cent sales tax which funds about 70 percent of the city's operating budget. A bulk of the money goes to the fire department, police department and roads. Check out nwaonline.com/210501Daily/ for today's photo gallery. (NWA Democrat-Gazette/Charlie Kaijo)
More News