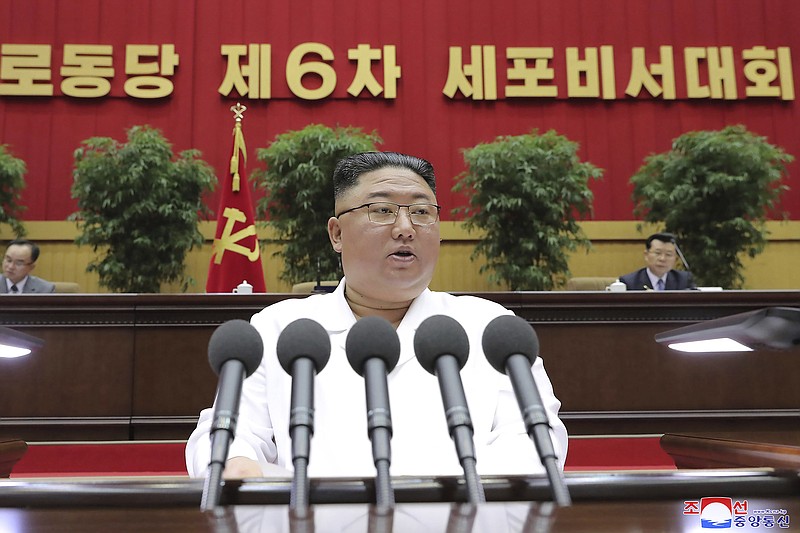 In this photo provided by the North Korean government, North Korean leader Kim Jong Un delivers a closing speech at the Sixth Conference of Cell Secretaries of the Workers' Party of Korea in Pyongyang, North Korea, Thursday, April 8, 2021. Independent journalists were not given access to cover the event depicted in this image distributed by the North Korean government. The content of this image is as provided and cannot be independently verified. Korean language watermark on image as provided by source reads: "KCNA" which is the abbreviation for Korean Central News Agency. (Korean Central News Agency/Korea News Service via AP)

SEOUL, South Korea --North Korea on Sunday warned the United States will face "a very grave situation" because President Joe Biden "made a big blunder" in his recent speech by calling the North a security threat and revealing his intent to maintain a hostile policy against it.

The statement was one of three that the North released Sunday directed at the United States and its ally South Korea. They included warnings that the North might respond to the Biden administration's recent statements about the country with unspecified "corresponding measures."

Biden's national security adviser, Jake Sullivan, said Sunday that U.S. policy is "not aimed at hostility, it's aimed at solutions" and at "ultimately achieving the complete denuclearization of the Korean Peninsula."

"And we're prepared to engage in diplomacy towards that ultimate objective, but work on practical measures that can help us make progress along the way towards that goal," Sullivan said on ABC's "This Week."

Last week, Biden, in his first address to Congress, called North Korea and Iran's nuclear programs "serious threats" to American and world security and said he'll work with allies to address those problems through diplomacy and stern deterrence.

The administration, which has been conducting a North Korea policy review, recently indicated that it would pursue a strategy somewhere between former President Donald Trump's direct outreach to North Korean leader Kim Jong Un, in which Trump strove for a single, sweeping deal, and the "strategic patience" approach of former President Barack Obama, which sought to compel the North to negotiate through sanctions and other forms of pressure.

[Video not showing up above? Click here to watch » https://www.youtube.com/watch?v=m4wPFNyores]

Both approaches failed, and North Korea has kept expanding its arsenal.

White House press secretary Jen Psaki said Friday that the administration "will not focus on achieving a grand bargain, nor will it rely on strategic patience." She said it would seek "a calibrated, practical approach that is open to and will explore diplomacy" with North Korea and would try to "make practical progress that increases the security​"​ of the United States and its allies.

But the scale of the task facing the administration was underlined by the angry statements from Pyongyang on Sunday. Kwon Jong Gun, a senior North Korean Foreign Ministry official, said Biden's comments revealed that little would change from the regime's point of view.

"His statement clearly reflects his intent to keep enforcing the hostile policy toward the DPRK as it had been done by the U.S. for over half a century," Kwon said. DPRK stands for the Democratic People's Republic of Korea, the North's official name.

"It is certain that the U.S. chief executive made a big blunder in the light of the present-day viewpoint," Kwon said. "Now that the keynote of the U.S. new DPRK policy has become clear, we will be compelled to press for corresponding measures, and with time the U.S. will find itself in a very grave situation."

Kwon didn't specify what steps North Korea would take, and his statement could be seen as an effort to apply pressure on the Biden administration as it's shaping up its policy.

Although Kwon's comments came in response to Biden's speech to Congress rather than directly to the policy review, they underscore the breakdown in communication between the two countries since the collapse of a summit between Trump and Kim in 2019 that ended with no agreement on dismantling the North's nuclear weapons facilities or easing U.S.-led sanctions.

"If Pyongyang agrees to working-level talks, the starting point of negotiations would be a freeze of North Korean testing and development of nuclear capabilities and delivery systems," said Leif-Eric Easley, a professor of international studies at Ewha University in Seoul. "If, on the other hand, Kim shuns diplomacy and opts for provocative tests, Washington will likely expand sanctions enforcement and military exercises with allies."

In January, Kim threatened to enlarge his nuclear arsenal and build more high-tech weapons targeting the U.S. mainland, saying the fate of bilateral ties would depend on whether it abandons its hostile policy. In March, he conducted short-range ballistic missile tests for the first time in a year, though he still maintains a moratorium on bigger weapons launches.

In a separate statement Sunday, the North's Foreign Ministry accused the Biden administration of using criticism of the North's human rights record as "a political weapon for overturning our social system."

"We will be forced to take corresponding measures," ​an unidentified spokesman for the ministry was quoted as saying. "We have already made it clear that we will counter in the strongest terms whoever encroaches upon the dignity of our supreme leadership, which is more valuable than our lives."

That was in response to a statement ​last week ​by Ned Price, the State Department spokesman, who called North Korea "one of the most repressive and totalitarian states in the world." Price cited "shoot-to-kill orders at the North Korea-China border" that U.S. officials say the North has imposed since the emergence of covid-19.

Also Sunday, Kim's sister, Kim Yo Jong, denounced South Korea for failing to stop a group of activists from using balloons to send propaganda leaflets across the countries' border into the North.

The group's leader said Friday he sent 500,000 leaflets by air last week, in defiance of a new, contentious South Korean law that criminalizes such action. He accused ​the South Korean government of "gagging" the defectors and denying North Koreans the right to know how their leaders were seen by the outside world.

Such launches, a tactic often used by defectors from North Korea campaigning against the Kim regime, were banned by South Korea in March on the grounds that they needlessly provoked Pyongyang and endangered South Koreans living near the border. The North cited the propaganda launches last year when it blew up an office building on its soil where officials from the two Koreas had worked together.

Kim Yo Jong, who serves as her brother's spokeswoman on inter-Korean issues, called the defectors "human wastes" in her statement Sunday, characterizing the launch as "a serious provocation" and warning that the North would "look into corresponding action."

She accused the South Korean government of "winking at" the leaflets. Seoul's Unification Ministry responded later Sunday saying it opposes any act that creates tensions on the Korean Peninsula, and it will strive to achieve better ties with North Korea.

North and South Korea remain in a technical state of war because the fighting in the 1950-53 Korean War ended with an armistice and not a peace treaty.

Easley said the North Korean statements by Kwon and Kim Yo Jong show that "Pyongyang is trying to drive a wedge between South Korea and the United States" ahead of the May 21 summit between Biden and South Korean President Moon Jae-in.

Information for this article was contributed by Hyung-Jin Kim of The Associated Press; by Simon Denyer and Min Joo Kim of The Washington Post; and by Choe Sang-Hun of The New York Times. 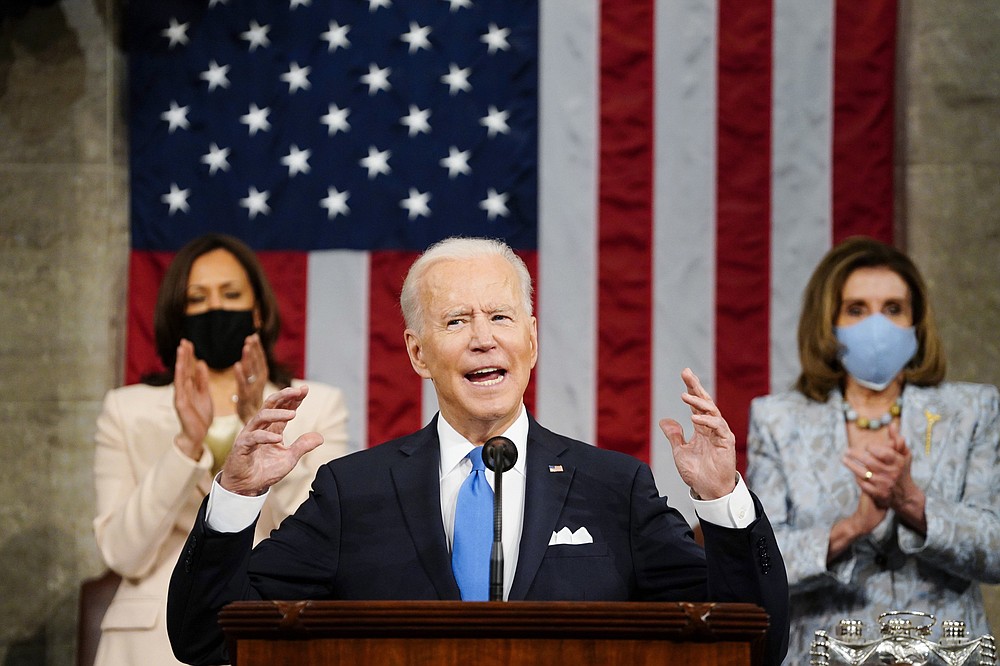 FILE - In this Wednesday, April 28, 2021, file photo, U.S. President Joe Biden addresses a joint session of Congress in the House Chamber at the U.S. Capitol as Vice President Kamala Harris, left, and House Speaker Nancy Pelosi of Calif., applaud, in Washington. North Korea on Sunday, May 2, warned the United States will face "a very grave situation" because Biden "made a big blunder" in his recent speech by calling the North a security threat and revealing his intent to maintain a hostile policy toward it. (Melina Mara/Pool Photo via AP, File)
ADVERTISEMENT