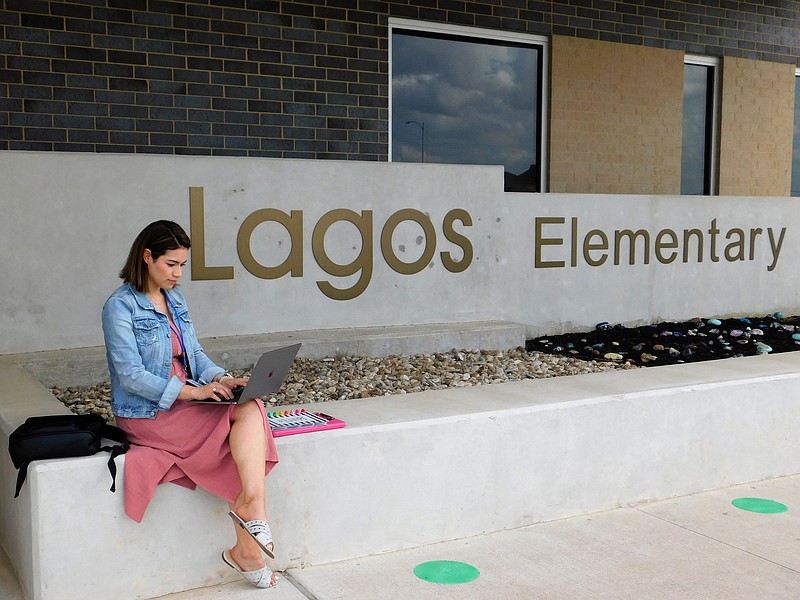 First-year teacher Cindy Hipps sits outside of Lagos Elementary School, at Manor Independent School District campus east of Austin, Texas where she has taught first grade in a virtual and in-person hybrid classroom during the covid-19 pandemic. Hipps said she was told she "was introduced to the ring of fire of teaching." "I feel like a superwoman now, like I can take on anything.” (Acacia Coronado/Report for America via AP)

MANOR, Texas -- This spring marks a year since the coronavirus pandemic shut down schools across the U.S., forcing many students, parents and teachers into virtual classrooms. As scientists learned more about the virus and states eased restrictions on gathering, some students returned to school while others kept learning at home -- but they all had to be taught. Many classrooms became a simultaneous combination of virtual and in-person instruction.

There was a learning curve for teachers, and inequalities in Wi-Fi and technology access added to the stresses, as did social and political unrest that gripped the nation over that period. Now, districts everywhere are grappling with exhausted educators wondering if this academic year will be their last.

Ana Saul Romero has seen many changes in teaching methods, testing and technology during her four decades as a teacher. But the past year packed in a lifetime's worth of tumult.

"It's difficult for me -- I am a baby boomer -- it is difficult with the technology, and I have learned more, but it is not enough, it is never enough," Romero said as she reminisced on the personal connections she made with students when she could see them every day in-person.

Educators have coped with their own personal and family impacts of the pandemic, while trying to support students dealing with academic struggles, food insecurity, trauma and social isolation, said Antoinette Miranda, an Ohio State University professor of school psychology who is also on her state's school board and married to a high school teacher.

"We talk a lot about the stress on students," Miranda said, "but I think there's a tremendous amount of stress on teachers."

As they raised health and safety concerns about resuming in-person classes, some people blamed them for holding up reopenings that could ease pressure on parents.

"I think there's kind of a backlash against teachers," Miranda said. "But I think there's also a renewed respect for teachers -- you know, especially parents that had to start teaching their kids at home."

Andre Spencer, superintendent of Manor Independent School District, where Romero works, said the district's pandemic response has focused on students and teachers. It spent millions to ensure every student and teacher has the technology necessary for virtual learning, including distributing mobile Wi-Fi hotspots for those without internet access. He also gathered a team to examine the resources and compensation his district provides teachers to ensure it stays competitive with others in the growing Austin area.

"I would say to teachers: 'Don't beat yourselves up too bad because this was a shift for everyone, and it was a shift in a direction that none of us were expecting,'" Spencer said.

First-year teacher Cindy Hipps, Romero's mentee and teaching partner, said she was told she "was introduced to the ring of fire of teaching."

Even before this school year began, district leaders worried about shortages of instructors, support staff and substitutes. With only piecemeal data from districts and states, it's tough to tell how the pandemic impacted turnover nationwide. Some places report more educators retiring, quitting or taking extended absences, but others say the exodus they worried about didn't happen.

American Federation of Teachers President Randi Weingarten anticipates a big uptick in retirements in the coming months, after a year of perpetual uncertainty and change as well as more strain for educators than she's ever seen.

"They love teaching. They know how important it is to engage kids. But this year has been unsustainable," especially for educators simultaneously teaching students in person and online, Weingarten said.

The union started providing a free trauma counseling program for members, including for those who had covid-19 or were traumatized by it.

National conversations around racial injustice, the presidential election and the Capitol riot impacted the job, too, especially for teachers of color.

Travis Bristol, a University of California, Berkeley professor who researches teacher workplace experiences and focuses on educators of color, recommends that schools intentionally set up opportunities for employees to talk about what they have been through and grieve if needed. Teachers who are supported in addressing their own challenges, stresses and mental health concerns from the past year will be better positioned to help students do the same, he said.

To boost retention and address challenges weighing on educators, some districts are considering spending some of their federal covid-19 relief funding on professional development to equip and train teachers for virtual instruction and on efforts to increase mental and emotional health support for teachers and students. They can also use the money for expenses such as providing extra compensation for pandemic-related duties or recruiting to address staffing shortages.

Romero was considering retiring. But even after such a challenging year, at her core, teaching is who she is.

"Let's just hope that in September, if it is not gone, at least we will be able to do a better job," Romero said. "We will have the experience of an entire year of trying to be above the water, but we will make it -- that's what educators do. We try and we fail and we get up and we shake it off and we do it again."

Cacia Coronado is a corps member for the Associated Press/Report for America Statehouse News Initiative. Report for America is a nonprofit national service program that places journalists in local newsrooms to report on undercovered issues. 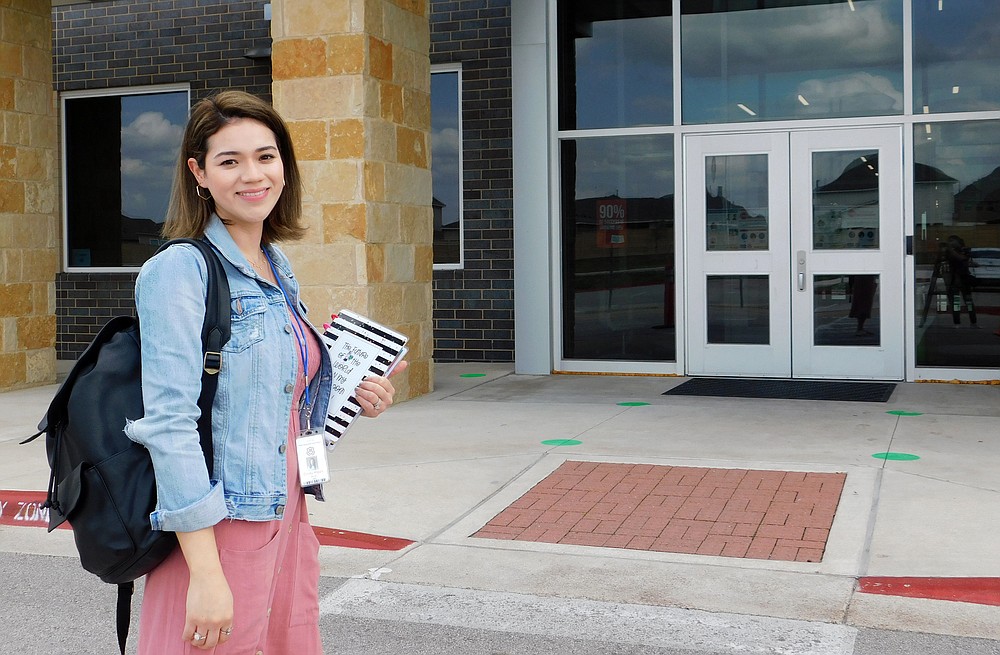 First-year teacher Cindy Hipps stands outside of Lagos Elementary School, at Manor Independent School District campus east of Austin, Texas where she has taught first grade in a virtual and in-person hybrid classroom during the covid-19 pandemic. Hipps said she was told she "was introduced to the ring of fire of teaching." "I feel like a superwoman now, like I can take on anything.” (Acacia Coronado/Report for America via AP)
ADVERTISEMENT