Air travelers take off in U.S.; TSA’s count is its highest in 13 months 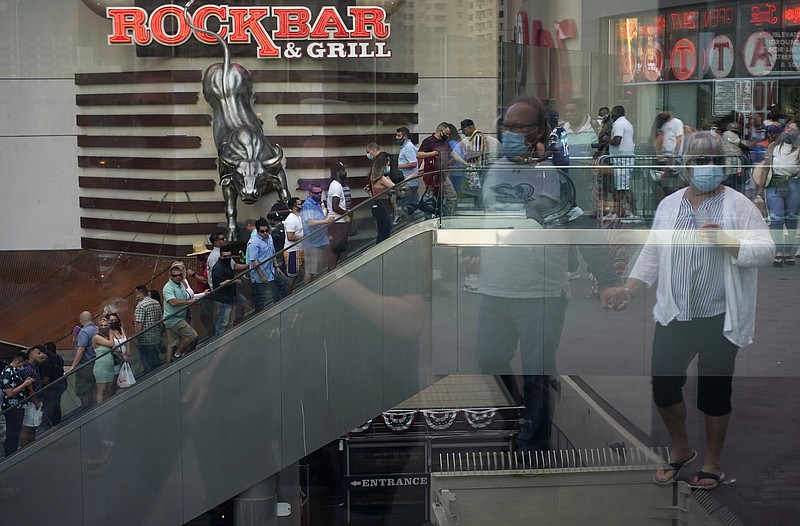 TALLAHASSEE, Fla. -- Air travel in the U.S. has hit its highest mark since covid-19 took hold more than 13 months ago, while European Union officials are proposing to ease restrictions on visitors to the continent as the vaccination push sends new cases and deaths tumbling in more affluent countries.

The improving picture in many places contrasts with the worsening disaster in India.

In the U.S., the seven-day average of new cases per day has fallen below 50,000 for the first time since October. Nearly 1.67 million people were screened at U.S. airport checkpoints on Sunday, according to the Transportation Security Administration, the highest number since mid-March of last year.

However, it was still 35% below the number of airport travelers reported on the comparable Sunday in 2019, according to TSA figures.

Airlines started to see an increase in bookings around mid-February, and the TSA has screened at least 1 million people every day since March 11. Vacation destinations have been most popular. Business travel, which is more profitable for airlines, remains drastically reduced.

[Video not showing up above? Click here to watch » https://www.youtube.com/watch?v=zwWwnNvT8vM]

Nearly 50 U.S. and U.K. travel-industry groups urged President Joe Biden and British Prime Minister Boris Johnson to lift restrictions on travel between the countries. The groups said in a letter Monday that it would be ideal if the two leaders would announce "the full reopening of the U.S.-UK air travel market for both U.S. and UK citizens" before the Group of Seven meeting in early June.

Airline executives are cautiously optimistic about summer travel as more Americans get vaccinated against covid-19. The Centers for Disease Control and Prevention says it is safe for vaccinated people to travel within the United States, although it continues to warn against travel to most foreign countries.

As Americans set their sights on summer travel even as more-contagious variants have taken hold, efforts are underway to boost vaccination efforts, which have begun to lag. The seven-day average of doses given per day fell 27% from a high of 3.26 million on April 11 to 2.37 million last Tuesday, according to the CDC.

"My plea to everyone: Get vaccinated now, please," Biden said Monday in Norfolk, Va. He stressed that he has worked hard to make sure there are more than 600 million doses of vaccine -- enough for all Americans.

"We're going to increase that number across the board as well so we can also be helping other nations once we take care of all Americans," the president said.

Additionally, the U.S. Food and Drug Administration is expected to authorize Pfizer's covid-19 vaccine for children ages 12 to 15 by next week, according to a federal official and a person familiar with the process, setting up shots for many before the beginning of the next school year.

The announcement is set to come a month after the company found that its shot, which is already authorized for those age 16 and older, also provided protection for the younger group.

The federal official, speaking on the condition of anonymity to preview the FDA's action, said the agency was expected to expand its emergency-use authorization for Pfizer's two-dose vaccine by early next week, and perhaps even sooner. The person familiar with the process, who spoke on condition of anonymity to discuss internal matters, confirmed the timeline and added that it is expected that the FDA will approve the Pfizer vaccine's use for even younger children sometime this fall.

The FDA action will be followed by a meeting of a federal vaccine advisory committee to discuss whether to recommend the shot for 12- to 15-year-olds. Shots could begin after the CDC adopts the committee's recommendation. Those steps could be completed in a matter of days.

The New York Times first reported on the expected timing for the authorization.

Meanwhile, Florida Gov. Ron DeSantis moved to suspend all remaining covid-19 restrictions imposed by communities across his state, signing into law on Monday a piece of legislation that gives him powers to invalidate local emergency measures put in place during the pandemic -- including mask mandates, limitations on business operations and the shuttering of schools.

"We don't know what's going to happen in the future," DeSantis said, "but I think this creates a structure that's going to be a little bit more respectful, I think, of people's businesses, jobs, schools and personal freedom."

Some municipalities have already lifted restrictions on their own. But Miami-Dade County, for example, still requires masks in all indoor public spaces and outdoors if people are within 10 feet of each other. An executive order signed by the governor Monday now rescinds those rules. However, private businesses -- including theme parks and hospitals -- can impose restrictions on their own.

In New York, Gov. Andrew Cuomo announced that New York City's subways will begin running all night again and that capacity restrictions on most businesses will end statewide in mid-May.

City subway service will return to 24-hour operation on May 17 after being closed for cleaning during overnight hours since the early days of the coronavirus pandemic last year, the Democratic governor said.

Capacity restrictions on businesses -- including restaurants, offices, beauty salons and gyms -- will be lifted in New York on May 19, and its neighboring states of New Jersey and Connecticut plan to do the same, Cuomo said.

Businesses in New York will still be required to operate in a way that guarantees that unvaccinated people can keep 6 feet of social-distancing space, even after the occupancy limits go away, the governor said.

Los Angeles County reported no coronavirus deaths on Sunday and Monday, which may partly be attributable to a lag in reporting but was nevertheless a hopeful sign that could move the county to allow an increase in capacity at events and venues, as well as indoor service at bars.

The European Union took a crucial step Monday toward reopening its borders to vaccinated travelers after the bloc's executive arm released a plan for allowing journeys to resume after more than a year of stringent coronavirus restrictions.

The European Commission, the executive branch of the EU, proposed that the 27 member countries reopen their borders to all travelers who have been fully vaccinated with shots approved by the bloc's medicine regulator or by the World Health Organization. The commission also outlined other, looser, pandemic-related conditions that should permit people to travel.

The proposal would see more regular travel to the bloc gradually restart in time for the summer tourism season, which provides the economic lifeblood for several member states.

Travel from outside the bloc was halted almost entirely last spring and only restored tentatively for a handful of exceptions last summer. The measures separated families, hobbled the tourism and aviation sectors and brought business travel to an almost total halt.

The detailed proposal laid out Monday also confirmed von der Leyen's earlier statements about the important role that the mutual recognition of vaccination certificates will play in resuming international travel.

To gain approval, the proposal released Monday will require the backing of a reinforced majority of member states, which it is likely to receive late this month or in early June. Still, individual member countries retain a good deal of sovereignty around health policy, so each country will probably use that leeway to tailor the travel measures further.

Even if the proposal is adopted by EU countries, the changes would not necessarily mean a simple or predictable set of rules for visitors, and spontaneous travel to Europe could still be far off.

In Greece, restaurants and cafes reopened their terraces on Monday after six months of shutdown, with customers flocking to soak up the sunshine. In France, high schools reopened, and a ban on domestic travel was lifted.

The once hard-hit Czech Republic, where cases are now declining, announced it will allow people to remove face coverings at all outdoor spaces starting next Monday if they keep their distance from others.

In Germany, Bavarian officials canceled Oktoberfest for a second year in a row because of the safety risks. The beer-drinking festivities typically attract about 6 million visitors from around the world.

Bavarian Gov. Markus Soeder said it was with "heavy hearts" that they decided to call off the festival for which the state is known globally, but that with coronavirus numbers still stubbornly high and German hospitals already struggling, it had to be done.

"Oktoberfest will be held again and will be big again," he pledged.

As the U.S. and other countries rush in aid to India, nations have boosted travel restrictions.

India reported 368,147 new coronavirus cases and 3,417 deaths on Monday -- numbers that experts believe are vast undercounts because of a widespread lack of testing and incomplete reporting.

The Health Ministry says it has confirmed 19.9 million covid-19 cases since the start of the pandemic, behind only the U.S., which has counted more than 32.4 million. It says more than 218,000 people have died.

After Australia last week joined nations including the U.S., U.K., France and Canada in blocking flights from India, on Saturday it went further. Amid reports that people in India were using flights from other countries to enter Australia, Prime Minister Scott Morrison's government banned citizens currently in India from entering.

The government also announced that anyone, including Australian citizens, arriving in the country after visiting India in the previous 14 days can face up to five years in jail, a $50,000 fine or both.

"This is about health," Morrison said during a Monday radio interview, adding that he was "deeply, deeply concerned about the humanitarian crisis in India."

New U.S. restrictions on travelers from India go into force today, but citizens, permanent U.S. residents and some others are exempt.