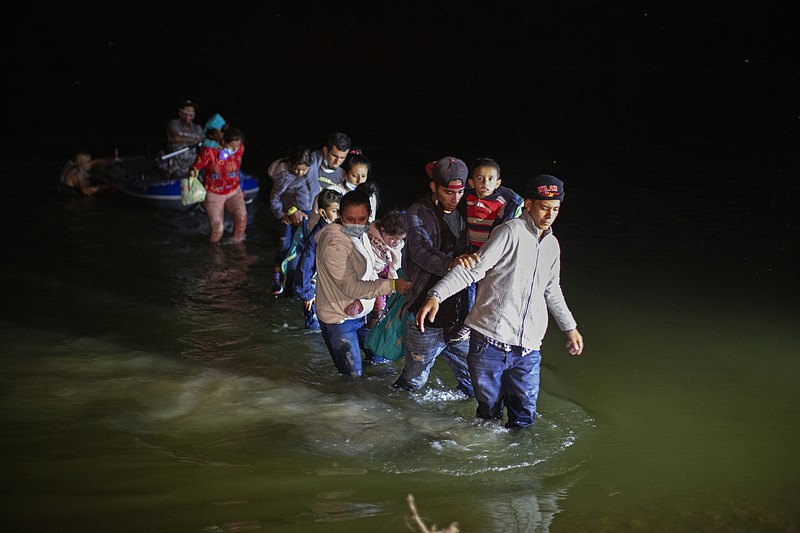 In this March 24, 2021 photo, migrant families, mostly from Central American countries, wade through shallow waters after being delivered by smugglers on small inflatable rafts on U.S. soil in Roma, Texas. The Biden administration said Monday that four families that were separated at the Mexico border during Donald Trump's presidency will be reunited in the United States this week in what Homeland Security Secretary Alejandro Mayorkas calls “just the beginning” of a broader effort. (AP Photo/Dario Lopez-Mills)

SAN DIEGO -- The Biden administration said Monday that four families who were separated at the Mexico border during Donald Trump's presidency will be reunited in the United States this week in what Homeland Security Secretary Alejandro Mayorkas calls "just the beginning" of a broader effort.

Two of the four families include mothers who were separated from their children in late 2017, one Honduran and the other Mexican, Mayorkas said, declining to detail their identities. He described them as children who were 3 years old at the time and "teenagers who have had to live without their parent during their most formative years."

The parents will return to the United States on humanitarian parole while authorities consider longer-term forms of legal status, said Michelle Brane, executive director of the administration's Family Reunification Task Force. The children are already in the U.S.

"I'm not sure how much he remembers me," said one of the mothers who will be reunited with her child this week, a 26-year-old Honduran woman whose son, now 6, is in Texas.

[Video not showing up above? Click here to watch » https://www.youtube.com/watch?v=J0JE4nnVWCY]

She has not yet told her son that she will be returning to the United States this week, worried that something could still go wrong and that his hopes could be dashed.

Exactly how many families will reunite in the United States and in what order is linked to negotiations with the American Civil Liberties Union to settle a federal lawsuit in San Diego, but Mayorkas said there were more to come.

"We continue to work tirelessly to reunite many more children with their parents in the weeks and months ahead," Mayorkas told reporters. "We have a lot of work still to do, but I am proud of the progress we have made and the reunifications that we have helped to achieve."

More than 5,500 children were separated from their parents during the Trump administration going back to July 2017, many of them under a "zero-tolerance" policy to criminally prosecute any adult who entered the country illegally, according to court filings. The Biden administration is doing its own count going back to Trump's inauguration in January 2017 and, Brane said, believes more than 1,000 families remain separated.

While family separation under zero tolerance ended in June 2018 under court order and shortly after Trump reversed course, Biden has repeatedly assailed the practice as an act of cruelty. An executive order on his first day in office pledged to reunite families who were still separated "to the greatest extent possible."

The reunification process has not been simple. For months it remained unclear what kind of legal status returning parents would receive, or how they would travel from remote villages in Central America to the United States.

Even finding some of the separated parents proved difficult. Lawyers representing the families still have not located 465 parents, many of whom were probably deported to Central America. Searches continue across the region.

The Biden administration worked with a group of about 10 lawyers and advocates to select 36 families from across Mexico and Central America, who will be reunited with their children in the United States over the next several weeks. Those families are part of a trial run, meant to prepare the federal government for hundreds of future reunifications, an effort unlike anything the U.S. has done before.

Over the past few weeks, members of the 10-person group began calling a handful of separated parents, asking if they were ready to be with their children in the United States.

Some of the parents were in disbelief. Ann Garcia, a staff attorney with the Catholic Legal Immigration Network and a member of the group, remembers her call with one Guatemalan mother.

"She said, 'Why did you choose me?' When we explained, she said, 'I'm grateful to you, the government, and God for choosing me.'"

Lawyers and advocates have been working with the government to guarantee legal status for returning parents so they can't be reseparated from their children.

The ACLU attorney Lee Gelernt said the four families' reunifications are "just the tip of the iceberg." Among the more than 5,500 children known to have been separated, more than 1,000 may still be apart from their parents and more than 400 parents have yet to be located, he said.

"We need the Biden administration to provide relief to all of them, including providing them a permanent pathway to citizenship and care," Gelernt said.

The reunifications begin as the administration confronts the third major increase in unaccompanied children arriving at the border in seven years. It has made major strides moving children from grossly overcrowded Border Patrol facilities to U.S. Department of Health and Human Services shelters, which are more suited to longer-term stays until children are placed with sponsors in the United States, typically parents or close relatives.

Health and Human Services opened 14 emergency intake centers, raising capacity to nearly 20,000 beds from 952 when the Federal Emergency Management Agency was dispatched March 13, Mayorkas said. About 400 asylum officers from U.S. Citizenship and Immigration Services have been assigned as case managers to speed the release of children to sponsors. As of Thursday, Health and Human Services had 22,557 children in its care.

Additionally, Biden is formally lifting the nation's refugee cap to 62,500 this year, weeks after facing bipartisan blowback for his delay in lifting Trump's limit of 15,000.

Biden last month moved to expand the eligibility criteria for resettlements, removing one roadblock to refugees entering the U.S. put in place by Trump, but he had initially stopped short of lifting the annual cap, with aides saying they did not believe it was necessary. But Biden faced sharp criticism for not at least taking the symbolic step of authorizing more refugees to enter the U.S. this year, and he swiftly reversed course.

In a statement, the president said the new limit "erases the historically low number set by the previous administration," adding that Trump's cap "did not reflect America's values as a nation that welcomes and supports refugees."

"It is important to take this action today to remove any lingering doubt in the minds of refugees around the world who have suffered so much, and who are anxiously waiting for their new lives to begin," Biden added.

He said it was a "sad truth" that the U.S. would not meet the 62,500 cap by the end of the fiscal year in September, given the pandemic and limitations on the country's resettlement capabilities -- some of which his administration has attributed to the Trump administration's policies. But staffers maintain that Biden remains committed to setting the cap at 125,000 for the 2022 fiscal year that starts in October, while they were working to improve U.S. capabilities to process refugees to be able to accept as many of them as possible under the new cap.

Secretary of State Antony Blinken notified Congress on Feb. 12 of a plan to raise the ceiling on admissions to 62,500, but no presidential determination followed. In an emergency declaration April 16, Biden stated the admission of up to 15,000 refugees set by Trump this year "remains justified by humanitarian concerns and is otherwise in the national interest."

"Failing to issue a new Determination undermines your declared purpose to reverse your predecessor's refugee policies," Sen. Bob Menendez, D-N.J., chairman of the Senate Foreign Relations Committee, wrote in a letter to Biden.

The new allocation added more slots for refugees from Africa, the Middle East and Central America and ended Trump's restrictions on resettlements from Somalia, Syria and Yemen.

Information for this article was contributed by Elliot Spagat, Matthew Lee and Zeke Miller of The Associated Press; and by Kevin Sieff and Adam Taylor of The Washington Post. 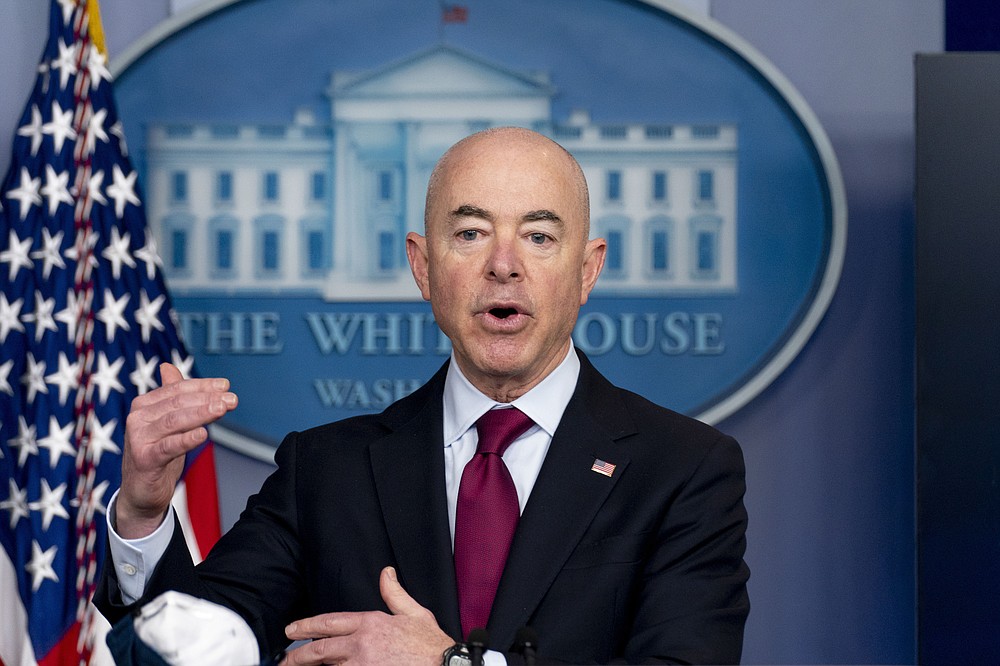 FILE - In this March 1, 2021, file photo, Homeland Security Secretary Alejandro Mayorkas speaks during a news conference at the White House in Washington. The Biden administration says four families who were separated at the Mexico border during Donald Trump’s presidency would be reunited in the United States during the first week of May, the first of what Mayorkas calls “just the beginning” of a broader effort. (AP Photo/Andrew Harnik, File) 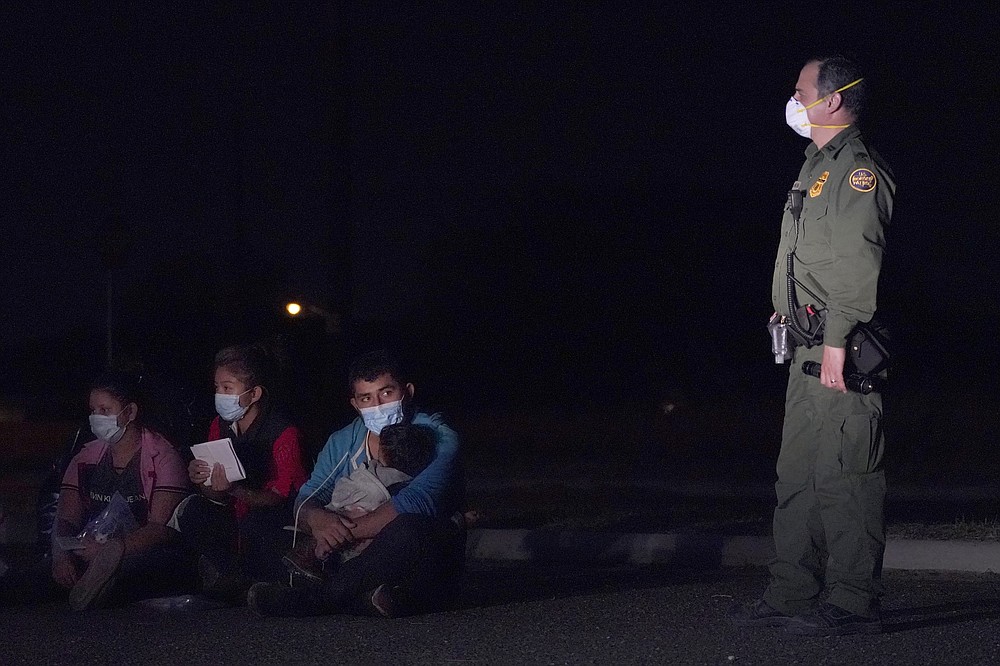 In this March 24, 2021 photo, a migrant man, center, holds a child as he looks at a U.S. Customs and Border Protection agent at an intake area after crossing the U.S.-Mexico border, early Wednesday, March 24, 2021, in Roma, Texas. The Biden administration said Monday that four families that were separated at the Mexico border during Donald Trump's presidency will be reunited in the United States this week in what Homeland Security Secretary Alejandro Mayorkas calls “just the beginning” of a broader effort. (AP Photo/Julio Cortez)
ADVERTISEMENT