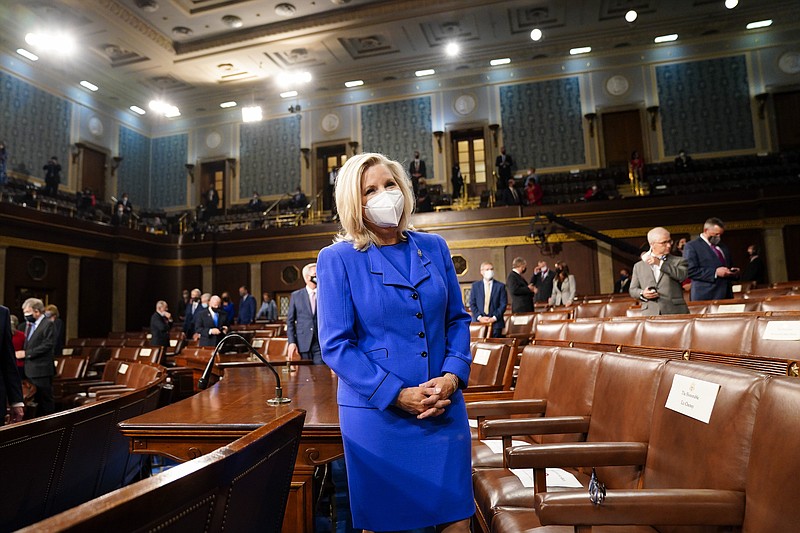 Rep. Liz Cheney, R-Wyo., waits for the arrival of President Joe Biden, before he addresses a joint session of Congress on April 28. MUST CREDIT: Washington Post photo by Melina Mara.

WASHINGTON -- Rep. Liz Cheney, R-Wyo., pushed back Monday against former president Donald Trump's attempt to commandeer the term "Big Lie," commonly used to refer to the claims that the 2020 election was stolen from Trump, and accused him and those who perpetrate the falsehoods of "poisoning" democracy.

[Video not showing up above? Click here to watch » https://www.youtube.com/watch?v=NTXH4cYVImg]

Trump released a statement Monday morning asserting: "The Fraudulent Presidential Election of 2020 will be, from this day forth, known as THE BIG LIE!" The statement came as an oversight board for Facebook is expected to rule this week on whether to allow Trump back on the social media platform after he was suspended in the wake of the Jan. 6 attack on the U.S. Capitol.

Cheney, who is in hot water among many of her Republican peers because of her unabashed criticism of Trump's attempts to subvert the election results, immediately spoke out against him.

"The 2020 presidential election was not stolen," Cheney tweeted. "Anyone who claims it was is spreading THE BIG LIE, turning their back on the rule of law, and poisoning our democratic system."

Cheney was among the few House Republicans to vote to impeach Trump for inciting the riot at the Capitol. Some Republicans demanded she be stripped of her leadership post over it, but she beat back a challenge. Cheney is the third-highest-ranking Republican in the House.

Cheney finds herself in an increasingly tenuous position in her party, which her father once helped lead as vice president.

The handful of GOP leaders who also criticized Trump over his role in the Jan. 6 attack and for spreading falsehoods about the election have since backpedaled from those remarks or, like Senate Minority Leader Mitch McConnell, R-Ky., declined to address the issue again, saying they are focused on the future.

House Minority Leader Kevin McCarthy, R-Calif., said in January that Trump "bears responsibility" for the attack, but he defended Trump's response in a recent "Fox News Sunday" interview. At the House Republicans' annual policy retreat last month, he also pointedly declined to say whether Cheney was still a "good fit" for the party's leadership team.

"That's a question for the conference," McCarthy said, while also saying that anyone criticizing Trump over the Capitol riot, as Cheney had done, was "not being productive."

McCarthy, who was one of the 147 congressional Republicans who voted to contest the 2020 presidential election results, stood by Cheney earlier this year during the attempt to oust her from leadership, but is not expected to do so again if another effort materializes.

There have been new calls for her to step down from her leadership role, and several House Republican aides said many are growing increasingly frustrated with her being so outspoken against Trump.

One leadership aide added that they "wouldn't be surprised" if a move against Cheney materializes at some point.

"Trump is still a very active part of our party," House Minority Whip Steve Scalise, R-La., said in an Axios interview Friday about the tension between Cheney and McCarthy. "This idea that you just disregard President Trump is not where we are." Scalise also voted to contest the 2020 election results.

Cheney's critics within the party contend she is serving as a distraction by continuing to point out that Trump's contention that the election was rigged or rife with fraud are false. These members argue she should be focused on uniting the party and emphasizing a message that the party can run on during the 2022 midterm elections.