State Plant Board backs June 30 cutoff for dicamba use 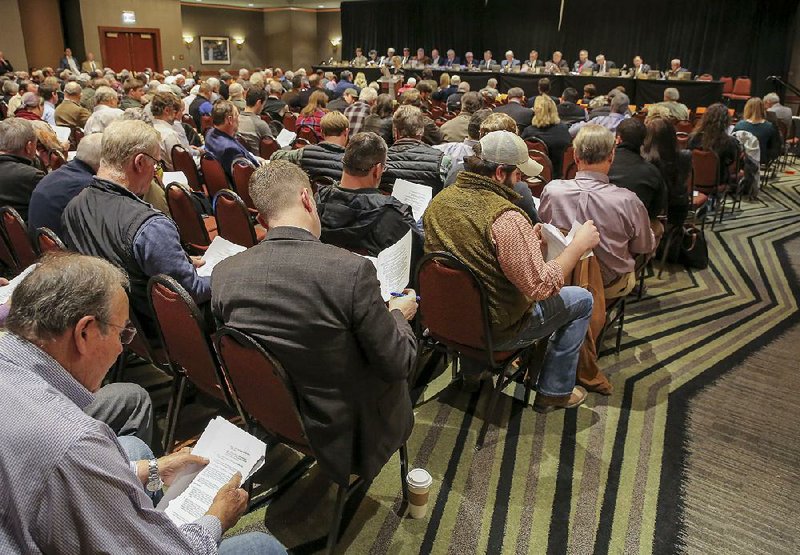 FILE - Participants look over proposed rules for the use of the herbicide dicamba at a meeting of the state Plant Board at the Embassy Suites Hotel in west Little Rock.

The state Plant Board voted Monday to allow farmers to spray dicamba through June 30 over the top of dicamba-tolerant soybeans and cotton.

Farmers had a May 25 cutoff the past two growing seasons.

The board's 9-5 vote to adopt the new rule for the 2021 growing season followed a two-hour public hearing and a two-hour board meeting, both held via the Zoom online platform. The rule, which now goes to lawmakers for their review later this month, was advanced as both a permanent rule and an emergency rule, to speed along the date it takes effect.

The online events had 170 viewers through the day.

While the proposal taken before the board was to set a June 30 cutoff for dicamba-tolerant soybeans and July 30 for cotton -- cutoffs set by the federal Environmental Protection Agency -- the July date was scrapped early in the board's discussion.

The June 30 cutoff for both crops was touted as a compromise.

Along with allowing the use of three EPA-approved, lower-volatility dicamba formulations through June 30, the board:

• Retained a 1-mile buffer, in all directions, between research stations operated by the University of Arkansas System Division of Agriculture and fields where dicamba is sprayed between April 16 and June 30.

• Set a half-mile buffer for certified organic crops and commercially grown specialty crops, defined as at least 1,000 plants or average annual sales of $25,000 for three years. Those organic and specialty crops had 1-mile buffers last year.

• Retained a quarter-mile buffer in all directions for soybeans and cotton varieties not tolerant of dicamba, down from a half-mile.

The board also retained a ban on tank-mixing dicamba with glyphosate, better known as Roundup.

Weed scientists have said such mixes increase dicamba's volatility, or ability to lift off plants hours or days after application and move to susceptible crops and vegetation.

Current regulations on record-keeping and training also remain in place.

Adopting the entire EPA label would have eliminated the Arkansas buffers in place last year as well as the prohibition on dicamba-Roundup tank mixes.

Sam Stuckey, a board member appointed by Gov. Asa Hutchinson to represent cotton farmers and author of the rule ultimately approved by the board, said he sought a compromise between a longer spraying season sought by some farmers and protection of specialty and organic crops and research stations.

Marty Eaton, a board member representing the Arkansas Seed Dealers Association, said farmers have learned how to spray dicamba better in the four growing seasons that at least one lower-volatility dicamba formulation has been available. Eaton provided the second to Stuckey's proposal.

The EPA has registered three dicamba formulations for in-crop use this season: Bayer's XtendiMax, BASF's Engenia and Syngenta's Tavium.

The use of older, more volatile dicamba formulations will remain prohibited between April 16 and Oct. 31. Exceptions remain for dicamba's limited use on pastureland and in forestry.

Matthew Marsh, a Hutchinson appointee to represent farmers at large, voted against extending dicamba's use. "Any extension beyond May 25 is wrong and not scientifically backed up," Marsh said, referring to years of testimony by UA System weed scientists that dicamba's volatility increases with the rise in temperatures and humidity.

"A mile buffer in the heat of summer is a red flag that maybe we shouldn't be doing this [extending dicamba's usage]," Marsh said.

Terry Fuller, the board's chairman, said soybeans are the plants most susceptible to dicamba but that they are getting the least protection under Stuckey's proposal. As chairman, Fuller didn't vote.

The board used the Zoom online platform because of the coronavirus pandemic. It heard from a dozen farmers who supported a longer spray season, and it listened to opposition from two farmers, two attorneys and the bird conservation director of Audubon Arkansas.

Arkansas didn't have a calendar-date restriction in 2017, the first year an EPA-registered in-crop dicamba formulation was used, until a flood of complaints of dicamba damage led the board that summer to enact a midseason emergency ban. Complaints of damage to crops and vegetation not tolerant of the herbicide ultimately topped 1,000 that year.

The 2017 experience led to an April 15 cutoff for 2018. Gradual shifts in the board's membership led to a relaxing of restrictions. Farmers had May 25 cutoffs for the 2019 and 2020 growing seasons.

During a 30-day public-comment period leading to Monday's vote, the board received 316 comments in favor of a longer spraying season and 263 comments against it.