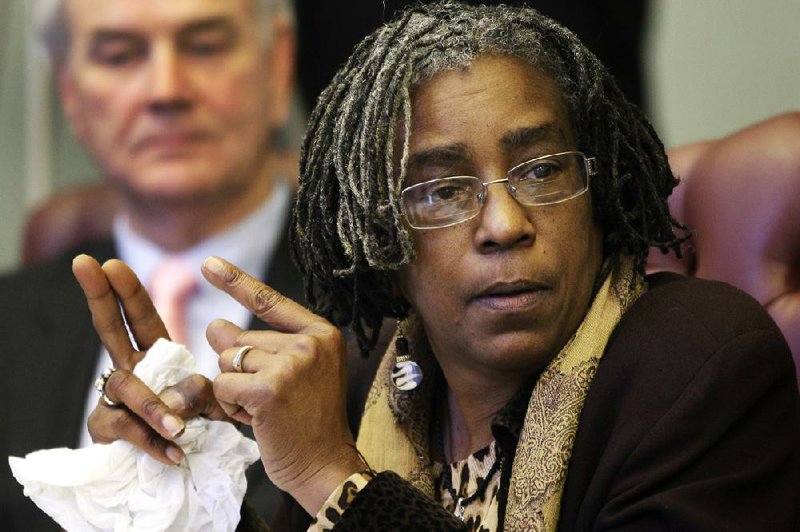 A native of Pine Bluff, Flowers represents District 25, which includes parts of Arkansas, Jefferson, Desha, Lincoln, Monroe and Phillips counties. She served in the House of Representatives from 2005 through 2010, after which she was elected to the Senate in 2011.

Flowers began her discussion with Bill 289 relating to guns and gun regulations. After much discussion, legislators did not override the governor's veto. Instead, they replaced it with a bill approved by the House and the Senate. House Bill 1957 passed, cutting off any federal regulations or restrictions on guns. She noted that it was "a bit vague and ambiguous and appears to call on law enforcement officers to decide what is conflicting with the law."

Other issues discussed included redistricting according to gain or loss of population; tax exemptions particularly relating to teachers and schools; raising teacher salaries; and the Medicaid Expansion Bill 530.

In closing, Flowers stressed her desire to be available to talk with students, encouraging them to learn about what happens in the legislature and to inspire them to consider being familiar with issues that will impact their lives and future careers.

Following a question and answer session moderated by Carla Martin, Flowers said that 1,675 bills were filed, and 894 became law. The legislature is on recess until October, at which time they will reconvene and discuss redistricting as a result of the 2020 census; the expanded no-tax holiday to include computers, calculators and cell phones; and a computer science course requirement for high school students.

The event was sponsored by the National Trends and Services Facet of The Links. S. Yvonne Blevins is president of the Pine Bluff chapter. Kelly Bryant and Trammell Howell are co-chairs, and Carla Martin, Gladys Benford, and Tenita Shannon Gragg are members of the facet for this international organization comprised of professional women of color committed to friendship and service.