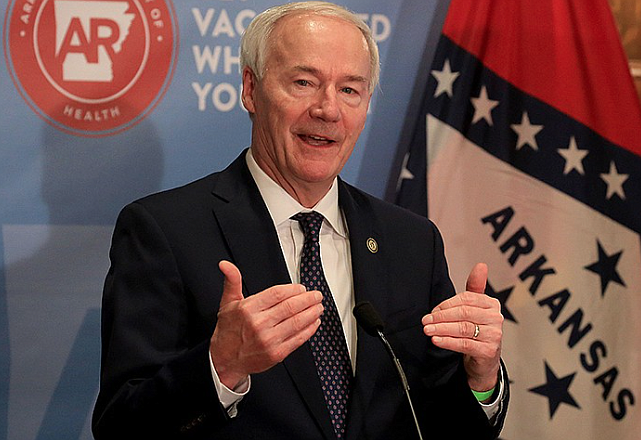 Gov. Asa Hutchinson on Tuesday set a goal of increasing the proportion of Arkansans who have had at least one dose of coronavirus vaccine to at least 50% within the next 90 days - a target that he said would require the pace of vaccinations in the state to increase.

"The big thing is that our decline needs to stop," Hutchinson said.

At his weekly news conference on the pandemic, Hutchinson also said he wasn't concerned about a new White House policy that will make states' unordered vaccine allocations available to other states.

The change has implications for Arkansas because it didn't order any new vaccine doses for this week and only ordered part what it was allocated for last week.

"Quite frankly it makes sense," Hutchinson said of the new policy.

"It just simply means that if we’re not utilizing all of our allocation in Arkansas and don’t order it, then it can be used for the urgent needs across the country and where there’s a higher acceptance rate, where there's a higher demand."

The number of people hospitalized in the state with covid-19 rose by 20, to 192, its highest level since March 21.

The state's death toll from the virus, as tracked by the Department of Health, rose by five, to 5,752.

As of Tuesday, 1,038,556 Arkansans, or about 34% of the state's population, had received at least one vaccine dose, according to Health Department figures.

Reaching the 50% mark, Hutchinson said, would require 467,206 more Arkansans to get a shot.

Renee Mallory, the Health Department's deputy director of public health program, said at the news conference that the department plans to make vaccinations available at hundreds of community events, such as farmer's markets and rodeos, across the state over the next several months.

Hutchinson also said the state is recommending that travelers from India, which is experiencing a surge of coronavirus cases, quarantine for 14 days after arriving in Arkansas.

He said he hadn't yet decided whether to extend the state's public health emergency that he first declared more than a year ago beyond May 30, when he said it is set to expire.

Under a law passed during this year's legislative session, such an extension would require the approval of the Legislative Council, with the request submitted to the council by May 20.

Additionally, Hutchinson said he will no longer hold weekly news conferences on the pandemic. Instead, he said he'll hold weekly briefing for reporters on a variety of topics, including the coronavirus.

The total number of coronavirus cases reported in Arkansas remained at 336,166 Tuesday morning, according to a state website. The death toll remained at 5,747.

According to the website, a total of 1,740,638 vaccines have been administered.

[Video not showing up above? Click here to view » https://www.youtube.com/watch?v=xelhtdViODE]