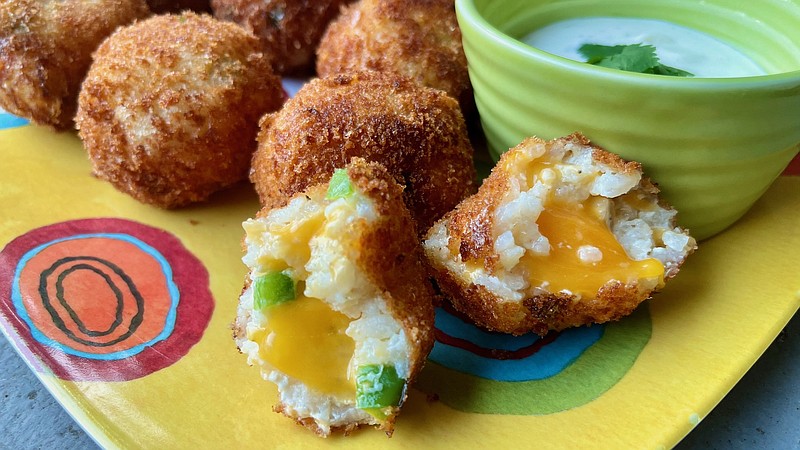 It's a little late (and perhaps wholly inappropriate) to suggest you serve these for Cinco de Mayo, but if you're a fan of arancini and jalapeno poppers, you're going to want to make these.

I came across the recipe by Marcella DiLonardo on Kitchn's Instagram feed.

Arancini (sometimes/also arancino or arancina), for the unfamiliar, are a Sicilian street food made of rice, meat and cheese shaped into balls, coated with breadcrumbs and then fried until golden brown. The exact origin is a bit mysterious, some sources say arancini were created in the 10th century during the Kalbid rule of Sicily. The Muslim Arab dynasty ruled Sicily from the mid 900s to the mid 1000s and similar dishes exist in Middle Eastern cuisine. But recipes for the fried rice balls didn't appear in Italian cookbooks until several hundred years later. According to visitsicily.info the different spellings can be a clue to where a particular rice ball hails — in Northern Italy they are called arancini, which is also the spelling adopted by Oxford Dictionary when the word was inducted in 2019; arancina is the spelling used in western Sicily; and in eastern Sicily you'll find arancino.

In this version the meat is replaced with cheddar cheese and fresh jalapenos resulting in a mashup of two favorite appetizers.

[Video not showing up above? Click here to watch: arkansasonline.com/55burner]

Place the cream cheese in a large bowl and let sit at room temperature until softened.

When the cream cheese is softened, add the grated cheese, jalapeno, garlic, 2 cups cooked white rice and season to taste with salt (I used 1 teaspoon), ground black pepper and cumin. Mix well using a wooden spoon or your hands. Taste the mixture to add more salt, black pepper or cumin.

Line a baking sheet with parchment paper. Divide the mixture into 12 portions (about 3 tablespoons each). Stuff each portion with a cheese cube and shape into balls that completely enclose the cheese cube. Place on the baking sheet.

Place the breadcrumbs in a second bowl.

Pour enough vegetable oil in a Dutch oven or heavy saucepan to fill to a depth of about 1 ½ inches. Heat oil over medium-high heat to about 375 degrees. Fry the balls in batches of four, turning as needed for even browning, until golden brown, 2 to 3 minutes. Using a slotted spoon, transfer to a paper towel-lined plate or wire rack. Serve immediately with desired sauce.

Note: To make your own panko-style breadcrumbs, tear 3 to 5 slices white bread into pieces and then process in a food processor to medium-fine crumbs. Spread the crumbs on a rimmed baking sheet and toast in a 300-degree oven until dry and crisp, 5 to 10 minutes.