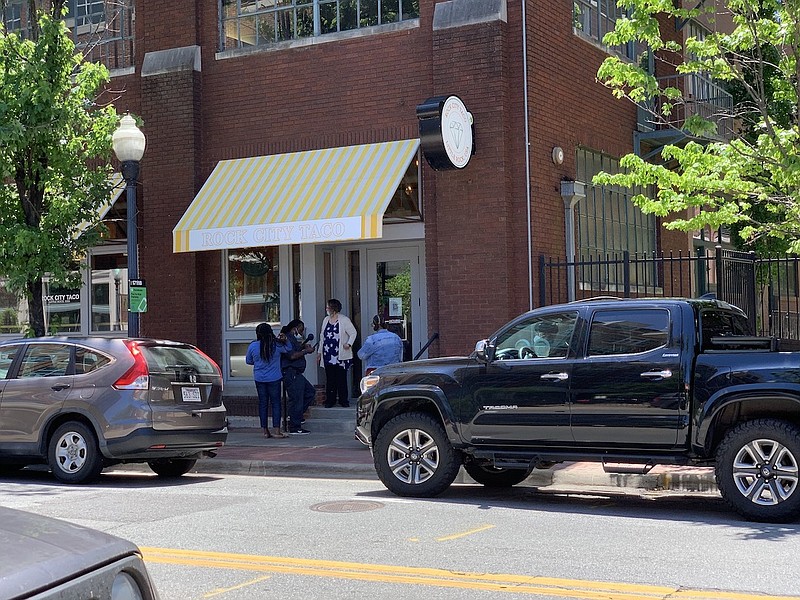 The restaurant was supposed to open in time for breakfast but had trouble with its point-of-sale system. The lunchtime grand opening went on as planned, but owner Joe Vincent said the restaurant was processing card payments through an online system in the meanwhile.

Wednesday was Cinco de Mayo, which marks the the Mexican army's May 5, 1862, victory over French forces in the Battle of Puebla. It's traditionally a big day for Mexican restaurants.

It's the second restaurant in a year that Vincent has opened. He also owns and operates Rock City Kitchen, 1515 W. Seventh St., across from the state Capitol.

Vincent said the principal menu item is tacos using meat that he is smoking at the Seventh Street restaurant, where he will also be operating a "ghost" kitchen, to be called Rock City Smokehouse, which will turn out smoked meats, including ribs.

Rock City Taco is the first Black-owned brick-and-mortar food service operation in the River Market since Brown Sugar Bake Shop, which originated in the River Market's Ottenheimer Market Hall, moved into the space next door, 419 E. Third St., Little Rock, a decade ago. It closed in 2016. Other Black-owned businesses, including Platnum BBQ and Bea Blessed Bakery, have since operated in the Market Hall.

The breakfast menu includes Rise-N-Shine Tacos on flour tortillas with a choice of meat ($2 extra for shrimp), eggs, potatoes, cheese and pepper blend with salsa; Huevos Rancheros; "Speedy Gonzalez," a breakfast burrito with choice of bacon or pork or turkey sausage, pepper blend, potatoes, and cheese; and Chilaquiles.

For lunch and "after hours," the menu includes soft tacos on corn tortillas with Mexican rice and refried beans; bowls (choice of meat with lettuce, tomatoes, beans, rice, cheese and salsa) and burritos.

CORRECTION: Platnum BBQ is among the Black-owned businesses that have operated in the Market Hall. An earlier version of this story gave an incorrect spelling of the name.