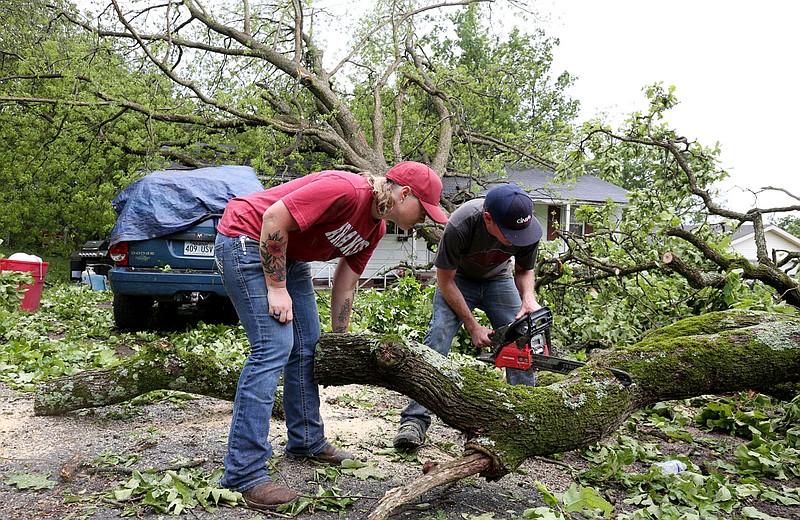 Barbara Selman and her brother Dewayne Selman cut the limbs and branches Tuesday, May 4, 2021, from a tree that fell from his yard across the street and onto his neighbors house on North 8th Street following strong winds overnight in Van Buren. The Crawford County Department of Emergency Management said damage throughout the county as a result of the storm was extensive and asked residents not to go out, except in case of an emergency. Check out nwaonline.com/210505Daily/ and nwadg.com/photos for a photo gallery..(NWA Democrat-Gazette/David Gottschalk)

A pair of tornadoes touched down in western Arkansas as powerful wind gusts and severe weather ripped through parts of the state late Monday and Tuesday morning.

A thunderstorm moved west to east from Oklahoma and across much of the northern half of Arkansas overnight, uprooting trees and knocking down power lines.

Surveyors from the National Weather Service confirmed during the day Tuesday that one tornado touched down in Crawford County and adjacent Sequoyah County in Oklahoma.

Late Tuesday, the weather service confirmed that a second tornado, an EF-1 with maximum winds of between 100-110 mph, had moved Monday night from Moffett, Okla., through the north side of Fort Smith and into Van Buren.

At 9:39 p.m. Monday, the National Weather Service issued a tornado warning for parts of western Arkansas as winds intensified.

At the Fort Smith Regional Airport, the weather service recorded wind gusts of up to 74 mph.

[Gallery not showing up above? Click here to watch » arkansasonline.com/54craw/]

"This is kind of a pretty high-end event, especially for a populated area," said Tyler Snider, a forecaster with the National Weather Service in Tulsa. "So anything above 70 mph kind of gets our attention especially because you are getting into winds that can really knock down some trees and start doing some damage to structures."

Utilities reported power outages around the state, but damage from the storm was particularly bad in Sebastian and Crawford counties.

Wind damaged parts of the roof of the Crawford County Courthouse in Van Buren, and rainwater leaked into the building's interior, County Judge Dennis Gilstrap said.

Power was knocked out to the courthouse, and officials had to use a backup generator, Gilstrap said.

"Now we got all this debris and trees and lots of roads blocked," Gilstrap said Tuesday.

Across the Arkansas River in Sebastian County, the damage was most extensive on Fort Smith's northern side, which saw downed trees, damaged power lines and broken traffic lights, according to City Administrator Carl Geffken.

"For the greater part of today, we haven't had power in part of downtown," Geffken said. "The convention center, county courthouse and one of our buildings on Carnall [Avenue] were without power."

Monday's severe weather came as parts of Northwest Arkansas were still recovering from last week's flooding, which damaged many roads and bridges.

"So you know it is like getting hit twice -- two punches back-to-back," Geffken said.

Crawford County has filed a disaster emergency proclamation with the Arkansas Division of Emergency Management from last week's floods and Monday's tornado. The county received about $1 million in damage, Gilstrap said.

"You kind of wear out your employees too. You have them working overtime and all that, you know," Gilstrap said. "They're out putting roads back together, and then the next thing you know you got them out, and they're cutting trees and trying to get trees out of the road."

The storm was not isolated to Northwest Arkansas. Thousands of people across the state were without power Tuesday. At the peak of the outages around 3 a.m., 21,000 Entergy customers in Arkansas were without power, according to spokesman David Lewis.

The areas with the most outages will likely have to wait a while before power is restored, Lewis said.

Areas around Walnut Ridge in Northeast Arkansas, Hot Springs, McGehee and Warren in Southeast Arkansas, and El Dorado were hit the hardest. Some areas may not see power restored until Thursday, Lewis said.

Southwestern Electric Power Co. reported a peak of 5,100 power outages in Arkansas around 2 a.m. About half of those were near Texarkana, according to a company spokeswoman.