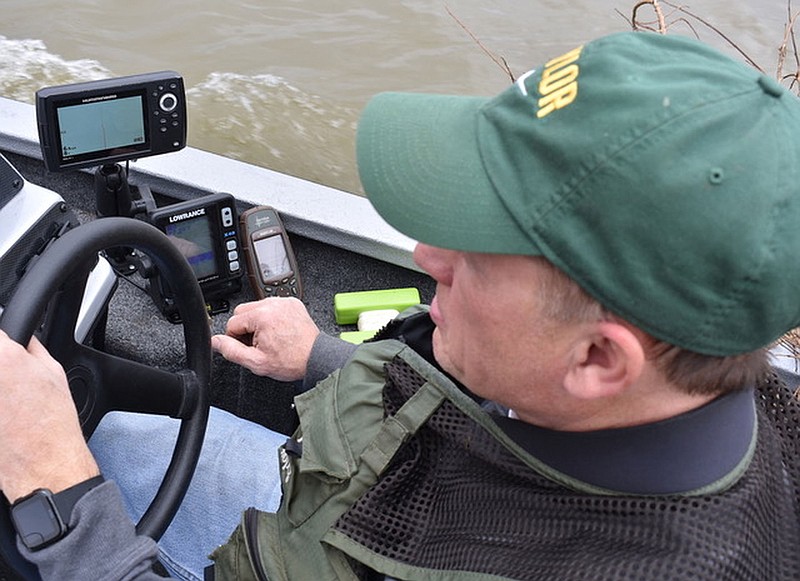 You had to run directly over offshore structure to find it with early and middle generation electronic graphs like these. Newer models can “see” things on both sides of a boat, as well. (Arkansas Democrat-Gazette/Bryan Hendricks)

Modern sonar supposedly advances young bass anglers who were spoon-fed on technology, but it might actually create greater parity.

Before the arrival of downscan and sidescan technology, even elite pro anglers relied on fishing visible cover or, depending on the season, targeting bass that visibly tended nests. Anglers that fished offshore relied on lake maps to show them submerged topographic features to which fish oriented.

State-of-the-art electronic graphs in the 1990s and early 2000s were a big advancement because they showed submerged cover and structure with fairly well defined detail. However, that generation of sonar was limited by its range. You had to actually drive over a brushpile or other fish-holding feature in order for your sonar to find it.

Sidescan widened the field of view by imaging the contents of the water to both sides of a boat, providing anglers a better picture of the bottom and reducing search time.

LiveScope goes a step further, painting a virtual picture of everything it "sees" and even showing the number and size of fish hovering in and around a brushpile.

George Cochran of Hot Springs, a two-time Bassmaster Classic champion and 2005 Forrest Wood Cup champion, said that modern electronics definitely shifted pro bass fishing focus to offshore, but he also said they also helped anglers like him that made their livings in really shallow water where electronics are not useful.

"LiveScope moved everybody off the banks and out to open water," Cochran said. "People like me, that fish shallow, have the banks all to themselves."

Until top-line electronics became ubiquitous, the banks were very crowded in bass tournaments, especially big events with 100 boats or more. I recall being on Beaver Lake during the 25th Anniversary BASS Tournament in 1992, when six boats waited in line to fish one downed log in the White River arm.

On Tuesday, for example, Bobby Lane won the Knockout Round in the Major League Fishing event on Sam Rayburn Reservoir to advance to Wednesday's final round. Cox fished boat docks and visible rocks to tally 14 bass weighing 28 pounds, 1 ounce.

Cox and Stephen Browning of Hot Springs, another traditionalist, finished eighth and seventh, respectively, to advance to the championship round.

As with all shallow water specialists, Lane devoted his post-tournament comments to his tackle, lures and presentation.

In contrast, Lee Livesay, who won the Bassmaster Elite Series event April 30 on Lake Fork in Texas offered an advanced tutorial on how to effectively use electronics to identify baitfish micro-patterns that influenced bass feeding behavior during the tournament.

Specifically, Livesay used the depth shading feature on his electronic maps to highlight water that was three feet or less, giving him a clear picture of potential spawning areas for gizzard shad that would attract bass in the mornings for short windows of opportunity.

"I could look at the LakeMaster mapping on my Humminbird HELIX units to find hard points and flats with hard spots that I could run to and continue running my pattern," Livesay said. "I knew I needed to have plenty of spots to cycle through over the four days of the tournament, and I knew I could trust my LakeMaster maps to give me an accurate picture of the depth across the entire lake."

What made Livesay's victory interesting is that he used his electronics to pinpoint productive areas in shallow water between the banks and deep water. Traditionally, anglers ignored those areas unless they had visible cover, like logs, brushpiles, grass, weeds or lily pads.

Also noteworthy is the fact that Livesay turned off his graphs when he approached his areas and anchored with retractable stern anchors. He stayed well away from his actual fishing areas and made very long casts with swimbaits.

"The likelihood of catching these mature fish are slim to none if you are being loud and getting on top of them," Livesay said in a post-tournament post from Humminbird/Minn Kota. "Once I had my Minn Kota Raptors anchored, I would put all my Humminbird HELIX units in standby and let the area settle for a couple of minutes before I started casting."

Such applications demonstrate the versatility of modern electronics in the hands of those that can match their capabilities with established bass patterns on specific waters. Livesay, an experienced hand on Lake Fork, understood the shad spawning pattern and linked it to his electronics to isolate areas that produced 28 pounds per day.

The takeaway is that electronics haven't provided a clear advantage to one group of anglers nor disadvantaged others. Instead, they have illuminated unknown and overlooked fishing opportunities in hard-fished waters.