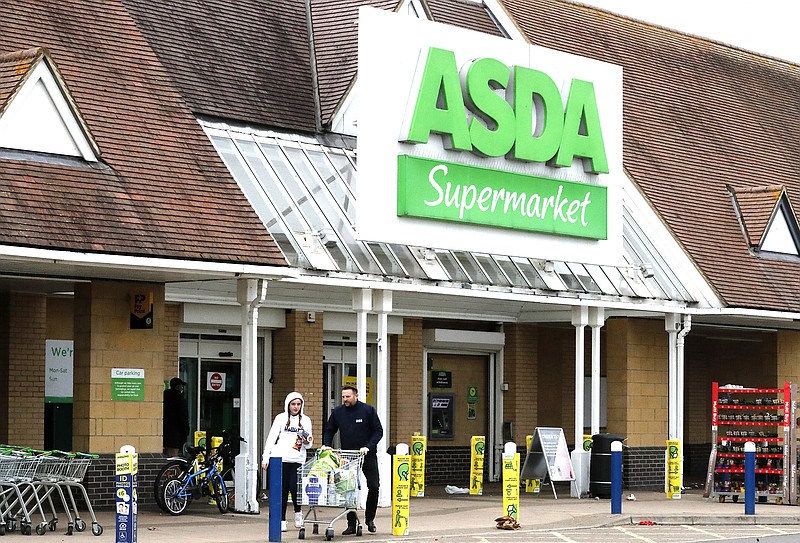 People leave an Asda supermarket in London in March. Walmart Inc.’s sale of Asda in the U.K. has received the approval of that nation’s competition authority. (AP/Frank Augstein)

Walmart Inc.'s sale of Asda, its U.K. supermarket chain, is a step closer to gaining the needed approval of that nation's antitrust authority.

Asda buyers Zuber and Mohsin Issa and private-equity group TDR Capital agreed Wednesday to sell 27 gas stations they jointly own in an effort to appease the U.K.'s Competition and Markets Authority.

Concerned that the buyers' purchase of Asda would reduce competition and raise gasoline prices, the authority indicated in a statement Wednesday that it will likely accept the proposal.

At the root of the issue is the buyers' plan, released in February, to sell Asda's on-premises gas stations to EG Group, which the buyers also own, for about $1 billion once their purchase of Asda from Walmart is completed.

EG Group owns thousands of gas stations and convenience stores throughout the world, including 395 in the U.K., according to the authority, while Asda owns 323.

The authority said last month that the sale of Asda to the Issa brothers and TDR Capital would likely result in higher gas prices in at least 36 markets.

Regulators' initial investigation, called Phase 1, began in December to examine the markets in which both companies own gas stations.

"Our job is to protect consumers by making sure there continues to be strong competition between petrol stations, which leads to lower prices at the pump," Senior Director of Mergers Joel Bamford said in the authority's April 20 report.

"These are two key players in the market, and it's important that we thoroughly analyze the deal to make sure that people don't end up paying over the odds," Bamford said.

Regulators said they now have five working days to consider whether to accept any of the proposals or refer the case for more stringent, or Phase 2, investigation.

Asda's most recent statement regarding the matter was posted on its corporate website on April 20. Published jointly with the Issa brothers and TDR Capital, it contains only a quote by the buyers' spokesman, who said, "We will be working constructively with the CMA over the course of the next 10 days in order to arrive at a satisfactory outcome for all parties within Phase 1."

"This would provide welcome certainty for our colleagues, suppliers and customers, and allow us to move forward with our exciting plans for investment and growth at Asda."

Walmart did not immediately respond to a request for comment on Wednesday's developments.

The Issa brothers and TDR Capital reached an agreement with Walmart in February to buy a majority stake in Asda for about $9.3 billion, pending regulatory approval. Under the new ownership, Bentonville-based Walmart would retain a minority stake in the company and a seat on its board of directors.

Asda Chief Executive Officer Roger Burnley was to remain in that post under the sale agreement. However, he said in March that he will leave the company after seeing it through the transition to its new ownership.

This isn't Walmart's first go-round with U.K. regulators. In April 2019, the Competition and Markets Authority nixed Walmart's proposal to sell a majority stake in Asda to rival supermarket chain Sainsbury's.

That transaction would have created the U.K.'s largest supermarket chain. Regulators feared the resulting reduced competition would lead to higher prices on goods and reduced product assortment.